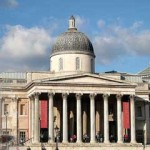 The National Gallery houses the national collection of Western European painting from the 13th to the 19th centuries. It is on show 361 days a year, free of charge.

All major traditions of Western European painting are represented from the artists of late medieval and Renaissance Italy to the French Impressionists.

The gallery fronts onto Trafalgar Square and so is well served by public transport.