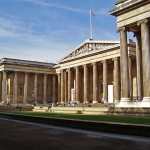 The British Museum is a museum of human history and culture in London.

Free to visit, its collections, are among the most comprehensive in the world, numbering more than 7,000,000 objects.

If you want to visit just one museum, then this is the one to go for!

Some exhibitions are charged for and can be quite expensive if you are visiting as a family.

The museum is situated in the heart of central London, close to tube stations (the nearest being Tottenham Court Road), bus routes and within walking distance (0.8 of a mile) of Euston Station.