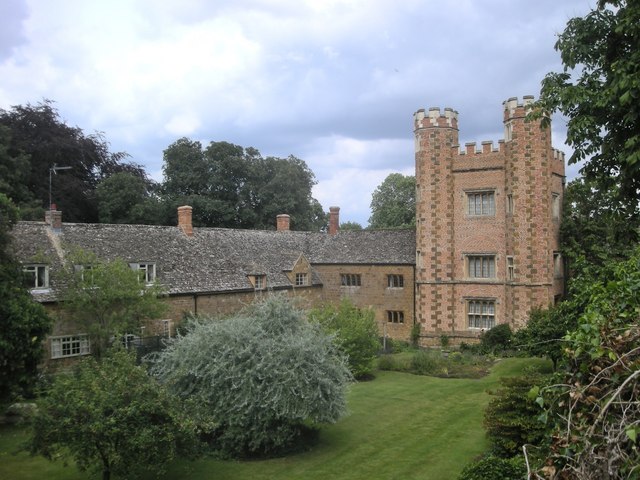 Castellated manor house begun c.1498. Most of the building was demolished in the C18th and the remains used as a farmhouse. The south west tower and south wing survive from 1498. Five ornamental fishponds (probably C18th) are nearby. (Pastscape). Not open.

Hanwell lies 3 miles N.W. of Banbury. The Rawlinson MSS. declare that the manor of Hanwell belonged to Ralph de Verdun, and afterwards passed through the Arden family, and thence by marriage to Ludovic Greville, from whom it came to William Cope, or Coope, cofferer to Henry VII., who became the lessee of the neighbouring lands and mansion of Hardwick in 1496, purchasing also several estates in the vicinity. His ancestor, John Cope, was a person of note in the reign of Richard II., obtaining for his services to that king the manor of Denshanger, Northants. William Cope married first, Agnes, daughter of Sir Robert Harcourt, the standard-bearer to Henry at Bosworth; and, secondly, Jane, daughter of John Spencer of Warwick, by whom he may have obtained Hanwell, if he did not purchase it of the Greviles. Leland (temp. Henry VIII.), speaks of his “very pleasant and gallant house” at Hanwell.It was a great quadrangular structure, having a frontage of 109 feet, and at each of the four corners was a large square tower, like a gatehouse, with lofty octagonal turrets. Between these the faces of the building were plain, with buttresses, and round the top of the whole building ran a battlemented parapet. The principal entrance was through a broad arched gateway in the W. front. A drawing of the building, as it originally stood, is given by Skelton. The towers were in three storeys, each having three large rooms, to which access was gained by a winding stair to the top of the turret. The whole was of excellent brickwork.

The tower of the S.W. corner alone remains at the present day, as the whole structure, with the exception of this building—now used as a farmhouse—was pulled down in 1770. The great kitchen of the S. front (now used as a dairy) and the adjoining room have curious fireplaces, placed back to back.

From the central room of the present tower a gallery, it is said, extended to the church, standing on adjacent high ground called Gallery Hill.

The eldest son of William Cope, by his second wife, was Anthony Cope, who was a learned man in the time of Henry VIII., and had grants of land from that King; he was Vice-Chamberlain to Queen Catherine Parr, and was created a Knight of the Carpet at the coronation of Edward VI., dying in 1551.

His descendant, Sir James Cope, Bart., of Hanwell (died 1638) left a son, a child of six, Sir Anthony Cope, who became a staunch Royalist, and made Hanwell Castle a secret rendezvous for the plotters of the Restoration, as Broughton and Fawsley were used on the opposite side before the Great Rebellion. In this he had the assistance of Richard Allestree, an Oxonian, who had fought at Edgehill and Worcester, and had afterwards taken holy orders. Allestree made several difficult visits to Charles II. in exile, and was carefully watched by Cromwell, but the proceedings at the headquarters of Hanwell were carried on with the strictest secrecy, and their plans were successfully carried out. (Castles Of England, Sir James D. Mackenzie, 1896)