A castle with two baileys surrounded by a ditch is first mentioned in 1173. Built on on a mound, the remains of the late 11th early 12th century polygonal shell keep and the roofless 12th century tower keep can be seen. The keep is said to have been dismantled and the roof taken away in 1680. The ruined castle was laid out as gardens in 1886. The castle ditch was sectioned in 1972-3 and no pottery later than the 13th century was found. It is evident from a description of the castle in 1332 that the royal residence at Guildford was in the castle outer bailey, being separated from the castle by a ditch and palisade. During the 14th century it was regarded as a palace. The palace largely went out of use after the reign of Richard II.

There is limited disability access due to the steep castle mound and the number of staircases. There is a small gift shop on the ground floor of the castle.

The Great Tower contains a model of the original castle c1300 AD and interpretation panels tracing the tower’s history to the present day. 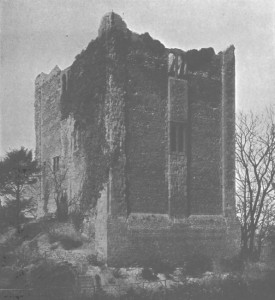 The great chalk range which sub-divides the county from E. to W. is pierced in two places by river courses : at the E. end by the Mole, at Dorking, and near its W. end, where it forms the fine narrow ridge called the Hog’s Back, by the passage of the river Wey, on its route to the Thames. At this latter gap, chiefly on the heights on the E. side, stands Guildford, the ancient county town of Surrey, the first mention of which place occurs temp. Alfred, in whose will the lands are said to belong to him. Here is a Saxon mound or burh, showing the existence of a royal residence, as at Tamworth, Leicester, Warwick, and other sites, but no mention is found of a castle until the reign of John ; it is, however, probable that the whole of this fortress, of keep, hall, and domestic buildings, with its outer walls, enclosing nearly six acres, was constructed by Henry II. (Clark.) The castle is placed a little above the town, which intervenes between it and the river. On the N.E. of the gorge and from its foot the chalk slope stretches gradually away to the W., a little above the river Wey, although in so good a position, defending as it does the southern approach to London, no military history, no sieges or surprises, are connected with it.

The Saxon fortress on the mound, however, has a gloomy tradition, being the place where Earl Godwin is said, in 1036, to have entrapped Alfred the Atheling, the brother of the Confessor, who, during the interregnum after the death of Canute, came over from Normandy at Godwin’s bidding, and was there seized, and his Norman followers blinded and killed or mutilated ; Alfred was carried to Ely, where he was blinded, and where he died soon after.

In 1202, repairs are mentioned at the gaol of this castle, which, though royal property, seems to have been used as a prison. ‘There was an extensive and well-stocked park here, and King John came here nineteen times in eleven years, staying in 1215 for a week. As is stated in regard to the hunting propensities of this King and others at castles in Sussex and elsewhere, the absence of regular markets in the land obliged the maintenance of vast preserves of game, which were hunted by the King and his Court in succession, in order to provide food for themselves and followers.

When the Dauphin Louis was called over by the barons in 1216, he passed with his army from Sandwich to Guildford, and seized and held this castle, as well as those of Reigate and Farnham, before proceeding in pursuit of King John. The Liberate Rolls of Henry III. contain directions for a great variety of work executed at this castle, chiefly for increasing the comfort and refinement of the private and domestic apartments, e.g. :

In 1240 new glass windows are put in the chapel, &c., and a new kitchen is added in 1214, with a chamber for Prince Edward, 50 feet long by 26 wide, `above the chamber of the king’s noble valets beneath’ ; also large glass windows in the queens wardrobe and the hall. In 1251 new pillars of Reigate stone to the arches of the hall are ordered, showing that this hall was built in aisles, like Oakham, Winchester, and others, and in this year the walls of the castle are strengthened with buttresses, and three mills arc built in the park (which therefore included the river here), one for corn, one for malt, and the third for fulling; also many repairs and additions are made. In 1256 a porch is given to the hall, which latter is to be painted with the appropriate story of Dives and Lazarus. A new gateway is ordered nest year, with a large solar over it, 32 feet by 18, and a wardrobe at the side ; four glass windows are to be inserted in the hall, the devices on which are prescribed. In 1258 the two chapels are paved with tiles, as also the chambers of the king and the queen, and there is added ‘a small house to heat the queen’s food.”

The King inspects various alterations in 1261, when the great hall receives the usual coating of whitewash ; indeed, whitewash, outside and inside, such as we see nowadays on coastguard stations, seems to have been the regimen for all buildings and walls ; and it is possible that in this way the keep of the great London fortress acquired the name of “The White Tower.” Henry was also fond of colouring the walls of some of the rooms, even the wainscotting and ceiling, with a light ground, usually of a green tint, and stencilling thereon gold and silver stars, after the fashion at Florence, and among his foreign artists was one Master William, a Florentine, who was both architect and master of the works at Guildford.

Edward I. assigned Guildford in part dower to his second wife Margaret, at whose death it reverted to Edward II. In the reign of Edward III. this castle was the headquarters of the sheriff of Surrey, who was ordered to prevent the holding here of tournaments—deemed dangerous and unnecessary. This Sovereign was frequently here, but the castle at that time was used as a common prison, and so continued till the reign of Henry VII. In 1611-12, after being attached to the Crown for 700 years, James I. granted it to one Francis Carter, in whose family it long remained. It is now the property of Lord Grantley.

The fine Norman keep is almost all that remains of this extensive castle ; it is built in rough Bargate stone rubble on the highest point of the slope, at the Saxon mound, which is 90 feet in diameter, and encircled with a broad and deep ditch ; traces appear also of a second outer ditch, filled in. The keep is rectangular, with pilasters at the ends of each face, and is built only partly on the mound. Clark says that rectangular keeps were seldom built on mounds, Guildford, Christchurch, and Clun being the only recorded examples ; in building on a mound the annular or “shell” form was adopted, for the better distribution of the weight ; and here, as if afraid to trust the square keep to the mound only, a part rests on its E. slope. The basement has been converted at some time into a kitchen with brickwork ; its entrance was 14 feet above the ground level, under a pointed arch, and was without a portcullis. The chief floor of state is 30 feet high, vaulted with three mural chambers, and lighted by round-headed windows. Its chief apartment is lined on one wall with an early Norman arcade, and seems to have been an oratory ; on its walls are rude graffiti of biblical subjects. The staircase is in the N.W. angle from this stage to the roof. The second floor, 15 feet high, is lighted by four windows, having a small mural garderobe with its drain corbelled out from the wall, and lighted by a loop.

Outside the keep on the edge of the mound was a high wall, of which half remains, haying an entrance with a common garderobe for the castle. Access to the keep must have been by an outer wooden staircase. (Clark.)

The curtain wall of the castle ran along the line of Quarry Street from a tower at the corner of this and Castle Street, past the great gateway to a late Norman postern still existing at the S.W. angle, thence round the counterscarp of the ditch to the W. tower. The gate in Quarry Street is a mere opening in the curtain (temp. Henry III.), and the gatehouse over it has gone. There are no walls on the N. and E. but the lines of the ditch can be traced. The domestic buildings are late Norman, but only some detached fragments of these survive.

Immediately outside the enceinte is an _immense series of caverns, cut in the chalkstone, which are possibly the quarries from which the castle was partly built. (Castles Of England, Sir James D. Mackenzie, 1896)