The impressive motte and shell keep of a castle founded in 1138 by Bishop Henry of Blois. Long a residence of the wealthy bishops of Winchester, the accommodation in the keep was updated in the 1520s. The keep was abandoned after Civil War service: but much-altered parts of the medieval bishops’ residence remain in private hands. 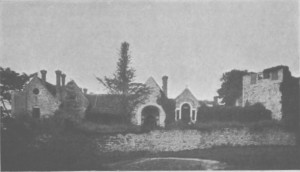 Stukeley slows Farnham to be the Roman station of Calleva Alrebatum standing on the military road which ran from London through Staines, Farnham, and Alton to Winchester, and so on to the West. It accordingly became a post of importance from earliest times, commanding as it did this main road to the most civilised parts of the kingdom, and occupying a strong position on an eminence.

Nothing is recorded of any Saxon fortress here, but in Norman times the castle we know of was founded by Henry of Blois, Bishop of Winchester, the brother of King Stephen, in 1138, and the existing structure is still the palace of his successors in that See. But it was not till the year 1216 that anything memorable occurred here : then the barons, in despair with their infamous King, had offered the throne to the French King and invited the Dauphin, with a considerable army, to invade England. He came in June of that year first to Guildford Castle, and thence at once proceeded to Farnham, which castle he took possession of.

In the Barons’ War of the same century this castle was held against King Henry, who besieged and took it, and then dismantled the building ; but it was afterwards rebuilt by the Bishop of Winchester in a style of great magnificence, and the moat and towers were rendered more defensible.

Then for nearly 400 years history is silent regarding this fortress, for we hear nothing about it till, in December 1642, it is said to have been garrisoned for King Charles, under Sir John Denham, the sheriff. It was attacked and taken by Sir William Waller soon after, and suffered much injury, part of the building being destroyed with gunpowder. Still it remained defensible, for a year later Waller secured in the castle and church of Farnham 900 prisoners taken at Alton. Five years after this, in July 1648, when the Parliament was in supreme power, the committee charged with the supervision of all defensible places, who sat at Derby House, ordered Farnham Castle to be completely dismantled, that it might not endanger the peace of the country. Then the materials were sold, the lead, timber, iron, and glass were stripped from the building, and the proceeds given to the troops. At the Restoration the manor and castle were restored to the See of Winchester, and between 1662 and 1684 the sum of £8000 was expended by Bishop Morley in rebuilding and repairs.

Hence originated most of the present structure: a quadrangular brick building of questionable taste, embattled and stuccoed. There is, however, one tower at the W. end which seems to have belonged to the old dismantled building, and the great gateway retains some of its old character. Passing through this, and leaving on the right the great hall and the State apartments, entrance is gained to the inner court, where stand the remains of the keep of the ancient castle, a polygon of no great size, which was once flanked by towers that have now vanished. Within the doorway a long passage ascends to the summit, and a second way leads into the area of the keep, where little is now left but the external walls. In 1761, when the drawing given by Grose was made, a flight of steps led up to the first storey, about 20 feet from the ground. The walls of the castle are very slight, about 2 feet thick, having brick occasionally mingled with the masonry. The whole is surrounded with a moat, now dry and planted with trees, the area enclosed by the ditch being about two acres.

Adjoining the castle is a fine park of 300 acres, watered by the stream Lodden, which rises in the neighbourhood. This was of old The Little Park, and is now well stocked with fallow deer. The great park, which contained 1000 acres, was disparked by an Act dated in the reign of Charles II.

On the E. side of the court is a passage leading clown to a sally-port, and on the S. are some ancient columns with painted arches, and having an arched vault above them : an interesting remnant of the old fabric. (Castles Of England, Sir James D. Mackenzie, 1896)