Today you can explore the whole of the castle, from the storerooms to the first-floor captain’s residence. A pleasant cycle path links Deal and Walmer Castles along the beachfront.

This fort, or blockhouse, was built by Henry VIII. in 1139, at the same time as were those of Walmer and Sandown, on either side of it, and is of much the same character, though somewhat more complicated and stronger. In the centre is a massive round tower, carried up with a square front to seaward, its foot being supported by four low semicircular bomb-proofs ; an area, or ditch, divides this from a girdle of six semi-circular lunettes, two of which are merely the counterscarp walls, the others being low casemated bomb-proof batteries, with embrasures for guns. The whole is surrounded by a ditch and counterscarp wall, built with six segments concentric with the interior buildings, and fitted with a drawbridge. It stands close to the S. end of the town of Deal, and immediately above high water line. 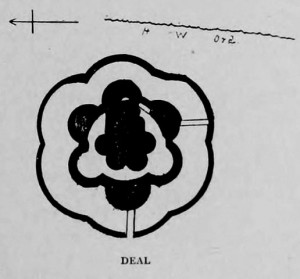 Before these forts were erected at Deal and Waltner, there existed between them two eminences of earthwork, called the Gaieties- and the Lesser Bulwarks, and there was a third between the N. end of Deal and Sandown Castle ; also one about the middle of the town, and two others on the sites of these forts, all having gun embrasures. These six works formed a line of batteries to defend that low part of the coast, in front of which was sheltered and deep water, and to hinder the disembarkation of a hostile force along this shore. It has been demonstrated with sufficient clearness that it was upon this particular point of Kent that the first landing of Caesar in Britain took place (see WALMER). Hasted gives an engraving of Deal Castle as it appeared in 1640 ; it has always contained handsome quarters for a governor and staff. (Castles Of England, Sir James D. Mackenzie, 1896)