Castle built in 1381-5 as a result of a French raid which ravaged this part of Kent in 1379. The building covered nearly eight acres. In the grounds of Cooling Castle Barns and visible from the road. 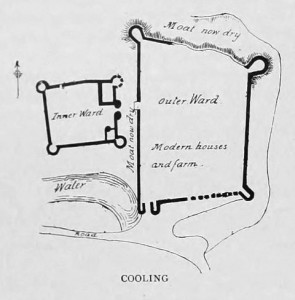 The railway which now runs eastward from Gravesend to a new pier and harbour called Port Victoria, at the E. extremity of the Isle of Grain, passes, at about one mile E. of Cliffe, the ancient seat of the Cobham family, called at that time Coulyng Castle. The manor is said to have been purchased for 400 marks (about ;£6700 of our money) by Sir John de Cobham, who died in 1252. At that time no castle existed, but there was a stately manor house within a demesne of more than 700 acres ; and the Cobhams held this property from that time till the reign of James I., a period of more than 350 years. The whole estate is described in an inquisition held in 1300, after the death of Sir John, son of the founder, and father of Henry, first Lord Cobham. Edward I. and his son held this Sir John in such high esteem, that a Mass was said before Prince Edward in his Chapel Royal for the soul of the dead knight upon his burial day.

The castle was erected under a licence to crenellate, of 3 Richard II. (138o), granted to Johannes de Cobeham, third Baron Cobham, a munificent patron of the building art. He first founded a chantry at Cobham, the place from which the name was derived, between Gravesend and Rochester, and where the family wars founded in the twelfth century by one Serlo de Cobham, whose son Henry purchased that manor. Here lie also repaired several churches, and, after obtaining his licence, erected this castle for the safety of the district, which had been greatly disturbed, first by the Kentish rebellion of Wat Tyler, and in 1379 by an invasion of the French, who landing in these parts, ravaged the country as far as Gravesend. The building was completed in 1385.

The fortress consisted of two quadrangular enclosures, built fair with the compass, of curtain walls and corner towers, entirely surrounded by broad and deep moats ; the larger enceinte, on the E., or outer ward, having a great gatehouse of entrance at its S.W. angle, and at the other corners large semi-circular headed turrets or bastions, open at the gorge. The W. front was of greater length than the one on the E., and in the centre of it was an opening opposite to the entrance gatehouse of the inner ward, to which a drawbridge across the intervening moat gave access. ‘this inner ward or court was a smaller square enclosure, with curtain walls and corner bastions like the outer; no strong building or keep tower existed in it, but there were dwellings attached to the walls. The old manor house was contained in the older balliurn.

Thirteen years after completing his fortress, Sir John Cobham, for opposing the tyranny of Richard II., was tried for high treason and condemned to a traitor’s death, though an old man over eighty years of age. But the king conceded to him the life he no longer valued, banishing him to Guernsey and seizing his property, which, on the accession of Henry IV., was restored, and Cobham was recalled. He enjoyed his estates for another ten years, dying in 1408 at the age of near a hundred years, when his granddaughter Joan came into the property, being thirty years of age, and made Coulyng her chief residence. After losing three husbands, she married, as the fourth, Sir John Oldcastle, of Almely, Herefordshire (q.v.), the Lollard martyr, who, in her right, became Lord Cobham. The name of this great man is indissolubly connected with Cooling ; for although he could not have actually lived there more than five years, “his noble stand for Christian truth and for liberty of conscience bestowed so great a benefit on posterity,” that his memory is more indelibly impressed upon Cooling than that of any other of its possessors.

Sir John Oldcastle was one of the early leaders of the reforming party, and was at great expense in collecting and transcribing the works of Wicklyffe, which he dispersed among the people, maintaining itinerant preachers in many parts of the country. This, of course, animated the clergy against him, and they eventually destroyed him. He was a great and able soldier, and in the reign of Henry IV. commanded an English army in France, which obliged the Duke of Orleans to raise the siege of Paris. He also served with Henry V., and was attached to his court. This king did at first hinder the attack of the clerical party on Oldcastle, but when in discussion with him regarding the supremacy of the Pope he called the Pontiff the Anti-Christ of Revelation, the king turned away from him shocked, and withdrew in displeasure, leaving his old companion-in arms to the tender mercies of his enemies, who got him condemned as a heretic, and committed him to the Tower. He managed to escape, however, into Wales, where he carried on his work of reformation. Then the clerics worked on the king by a story that Lord Cobham was leading an army of 20,000 Lollards against the Crown, and though an assembly of only one hundred persons was found, and these collected merely for devotion, Henry was led to issue an attainder, and set a price on Cobham’s head of 1000 marks (about £10,000 of our currency). At last, after four years’ hiding in Wales, his enemies captured the good man, and bringing him to London, dragged him to execution in St. Giles’ Fields. They hung him in chains from a gibbet alive, and then lighting a fire beneath, burnt him to death : and this on Christmas Day, 1417. He was a man of much learning and talent, and his greatness of soul would not brook concessions to tenets which 11e thought false, (Chambers.)

After this, his widow Joan consoled herself with a fifth husband, Sir John Harpenden, who, although he lived at Cooling three times as long as Oldcastle, is not recalled in memory.

The most remarkable event in the history of this castle is its assault and capture by Sir Thomas Wyatt in January 1554, its then owner, the Lord of Cobham and Coulyng, being George Brooke, whose sister was Wyatt’s mother. It appears that the original intention in Wyatt’s mind was to make an armed demonstration, in order to prevent the marriage of Queen Mary with Philip of Spain ; but his movement was rebellion in the eye of the law, and certainly grew into this. Wyatt defeated, near Gravesend, the Duke of Norfolk and his small force of “Whitecoats” supplied from London, who, under Captain Bret, went over to him ; then the insurgents, seizing; the Duke’s six guns, brought them on to the assault of Cooling Castle. A full report of this siege, written by Lord Cobham to the Queen, is extant, from which it appears that Wyatt’s force, woo strong, came before the castle at eleven o’clock A.M., and battered the great entrance of the outer ward with two great guns, while the other four were laid against another side of the castle. Lord Cobham defended his house with his three sons and a handful of men till five o’clock in the evening, having no weapons but four or five hand-guns ; several of his men had then been killed, the ammunition was nearly expended, and the gates and drawbridge so injured that his men began to murmur and mutiny. So he was obliged to yield. In spite of this gallant defence, he and his sons were sent to the Tower, where the name of his younger son still appears carved on a window of the Beauchamp Tower : “Thomas Cobham, 1555” They were, however, released in the following March.

Some stone and iron cannon-balls have been found in the moat among the fallen masonry of the W. wall of the outer court. It seems as if Wyatt effected an entrance into this ward, and was successfully battering the gatehouse of the inner court, across the moat, when Cobham capitulated. After this Cooling was probably seldom used, and was suffered to fall into ruin, after an existence of little more than 200 years. The park, however, was long maintained, and the magnificent mansion of Cobham Hall was built between 1584 and 1603.

The great gatehouse at the S.W. angle of the outer court is literally perfect. It has two lofty semi-circular flanking towers, heavily machicolated, and a portcullis. The arched gateway, is feet high, was closed by heavy doors, the four iron gudgeons of which are still remaining, and the entrance was also defended by a number of apertures, called meurtrières, 3 feet long and 1 foot broad, and by loops. Upon the E. tower is still a copper plate with Lord Cobham’s well-known inscription, or charter, with his seal attached, and in these words :

(Seal, Gules a chevron or, and three lions rampant sable.) .

On entering the outer enclosure, the modern buildings and farm are found to block the area, and proceeding to the centre of the W. wall we pass over the dry moat into the inner ward, the walls of which are built of chalkstone faced with rag and flints in chess-board pattern. Here in the N.E. corner was a great chamber, or hall, part of the vaulted crypt of which alone remains. The corner bastion has disappeared, but seems to have been hexagonal internally; the walls are from i5 to 27 feet in height. Of this gatehouse the circular fronts of its two towers remain, with the axle-bearings of the drawbridge, the portcullis groove and loopholes. The dwellings can be traced by their foundations. In the S.E. corner is a curious square chamber with staircase down to the vaults, and a pointed window over the moat, which has been walled up ; it is suggested that this has contained a bath like the one at Leeds Castle. ‘There was a water-gate in the W. wall, close to the N.W. tower, and here the remains of a small boat have been dug up. (Castles Of England, Sir James D. Mackenzie, 1896)