Interpretation panels, an elevated viewing area and some seating the castle is a main focus of interest on the city wall trail. 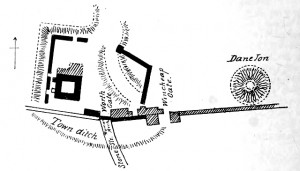 Kilburn, in his Survey, states that a castle here was burnt and razed by the Danes, and continued in ruins till after the Conquest, when William I. erected the existing one upon the former site, naming it the “New Castle,” to which the name “Lodan’s Castle” was also given, and placing in it a garrison of 700 men, to keep under the men of Kent. The castle is mentioned in 1 William 11. ; and in the reign of Stephen, William d’Ypres, Earl of Kent, who was that king’s captain of mercenaries, was its governor. From the time of Richard I. to that of John, the custody of Canterbury was held by Theoricus le Vineter. Henry II. had increased the extent of the fortress and its defences by the addition of some lands in the vicinity, and it was then probably a strong place ; but when Louis the Dauphin arrived, in 1216, in the Isle of Thanet, he came on to Canterbury, and received the submission both of the city and its castle. Early in the reign of Henry III. Hubert de Burgh had the custody of it, and later the place seems to have become a common prison ; and although early in the reign of Edward II. orders were sent to the sheriff to furnish this castle with provisions and munitions of war, still it continued as the chief prison of the county from those times till the reign of Henry V111. or Elizabeth, when the gaol was removed elsewhere. It was at one time the custom for prisoners to sit in the barbican and beg from the passers-by ; many Jews were confined here, and Plot states that in his time (1672) there remained some versicles of the Psalms inscribed by them on the wall of the N.E. staircase.

There are scarcely any historical notices recorded of Canterbury Castle. It lies on the S.W. of the city, and commanded the approach by the Stone Street. The Conqueror appears to have obtained the site by exchange with the Arch¬bishop and the Abbot of St. Augustine’s Monastery. The ancient Roman brick archway, called the Worth Gate, adjoined the castle at the commencement of the Roman causeway to the Portus Lemanis, or Lymne, called the Stone Street, by which the knights rode in to the murder of Becket, as is related in the account of Saltwood Castle (q.v.). This splendid specimen of a Roman arch was cleared away at the end of the last century. Stukeley writes in its praise. It was built up at the time of Wyatt’s insurrection, in 1554, for the security of the castle and city.

The area covered by the castle contained 4¼ acres, and the later city wall was built 50 feet beyond it, this ancient wall, which included the Worth Gate, forming the S. ballium or bailey of the castle. A deep ditch surrounded the enclosure, outside of which was a barbican with a thick wall, defended by four towers, and the passage to the town from the gatehouse lay over a drawbridge. The wall and ditch were both in existence in 1792, when they were demolished to give place to some buildings, the ditch being filled in.

Nothing remains now but the great Norman keep, measuring 88 feet by 80 feet, being the third largest now standing in England. It is complete, though ruinous ; the corners are supported by strong pilasters, of which there are also two along each front ; the walls are It feet thick, and about 50 feet in height, with fine windows in the upper, or state storey, ornamented, as at Rochester, with Norman chevron work. Inside there are two partition walls, with arches to allow of communication, and, as at Rochester and Dover, the well is brought up through the wall in a shaft, with openings on each floor for supplying water. There are also a mural gallery and spiral staircases, one of these descending to the basement. The entrance was at the N. end, high up on the second floor, where appears a large arch closed up. A projecting fore-building, as at Dover and Rochester, containing a grand staircase and rooms, led up to this doorway, which is finely ornamented inside ; the foundations of this fore-building may still be traced.

The property of the castle and grounds seems to have continued with the Crown till the end of the reign of James I., who granted it to one Watson, in whose family it continued for more than one hundred years, when it was sold, and it has since passed to many owners. The “Dane John” hill, about 500 yards distant, and within the walls of the city, does not seem to have had any connection with the castle.

An engraving of the tower, given in “Vestiges of Antiquity,” by T. Hastings, folio, published 1813, shows the front of a square Norman keep, with slightly projecting corner pilasters, forming the corner turrets, and two central pilasters, all having ashlar groins. The tower is demolished in the middle of the upper or third stage, and shoes circular headed Late Norman windows. There are no lights in the basement or, rather, the ground floor. (Castles Of England, Sir James D. Mackenzie, 1896)