Mid 15th century castle, possibly on the site of a Stephanic castle, rebuilt in the late 15th century and altered circa 1572. It fell into a period of disuse and ruin after 1649. It was restored as a country house in 1837-40 and 1868-89. Further improvements took place in 1901-07 and in the 1930s. 16th century formal garden remains can be seen on aerial photographs to the south and east of the castle. (Pastscape)

Sudeley Castle stands a short distance to the S.E. of Winchcomb; it is rather a castellated mansion than a baronial fortress. Leland gives an unusually long description of it:

Boteler, Lord Sudeley, made this castle a fundamentis, and when it was made it had the price of all buildings in those dayes. The Lord Sudeley that builded the castle was a famous man of warre in K. Hen. 5 and K. Hen. 6 dayes and was an admirall (as I have heard) on sea; whereupon it was supposed and spoken, that it was partly builded ex spoliis Gallorum; and some speake of a towre in it, called Potmare’s Tower, that it should be made of a ransome of his. One thing was to be noted in this castle, that part of the windowes of it were glazed with verall. There had been a manor-place at Sudeley before the building of the castle, and the plot is yet seene in Sudeley Parke where it stoode. K. Ed. 4 bore no good will to the Lord Sudeley, as a man suspected to be at heart K. Hen. 6 his man, whereupon by complaints he was attached, and going up to London he looked from the hill to Sudeley, and sayd, ‘Sudeley Castle, thou art the traytor not I.’ After he made an honest declaration, and sold his castle of Sudeley to K. Ed. 4. Afterwards K. Hen. 7 gave this castle to his uncle Jasper, Duke of Bedford, or permitted him to have the use of it. Now it goeth to ruine, more pittye. 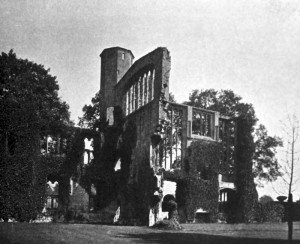 “In old time”, says Camden, “certain noblemen here dwelt descended from a right ancient English race, to wit from Gorda, King Ethelred’s daughter, whose son Ralph, Earl of Hereford, begat Harold, Lord of Sudeley (temp. Will. Conqr.); and this family long flourished here, having their dwelling as stated above, until, the male issue failing, the heiress Joan married William Butler of the family of Wem, whose grandson Ralph, being Lord Chamberlain of England, was created Baron Sudeley by Henry VI., and built this castle”.

On September 5, 1548, Queen Katherine Parr died here of puerperal fever following the birth of her luckless daughter, and she was cered and buried in a lovely tomb in the castle chapel. She had been married to her old admirer, Thomas Seymour, the Lord Admiral, immediately on the death of Henry VIII. (January 28, 1546-1547), and Seymour had been made Lord Sudeley by his nephew Edward VI., with the additional gift of this splendid castle and manor; but after the admiral had been beheaded by his brother the Protector Somerset (March 1549), these were conferred upon William Parr, Marquis of Northampton, the brother of the late Queen. He, however, lost his head on Tower Hill in 1554, after Wyatt’s insurrection (see ALLINGTON, KENT), when this castle and manor were presented by Queen Mary, for services rendered to her, to Sir John Brydges, whom she created Baron Chandos of Sudeley (see WILTON, HEREFORDSHIRE). George, the sixth Earl Chandos, was the last of his family by whom the castle was inhabited; he was a zealous supporter of King Charles, and under him this castle became a Royalist stronghold; he raised and led into the field at his own cost a regiment of cavalry, leaving a garrison at Sudeley under Captain Brydges. During the earl’s absence Massy, the Governor of Gloucester, surprised the place on New Year’s Day 1642, arriving with 300 foot and two guns and dragoons from Cirencester. He at once opened fire, and next day prepared to storm the castle. A party of horse having possessed themselves of a garden close to the walls, set fire to some outbuildings containing hay and straw, and under cover of the smoke the guns were brought up against the weakest part of the buildings; when, as the castle was badly provisioned and ill-found in stores and ammunition, the garrison, deeming resistance useless, called a parley and surrendered the place on terms which, as usual, were not observed by the Parliamentary troops, who plundered the house and desecrated the chapel, breaking the tomb of the Queen. 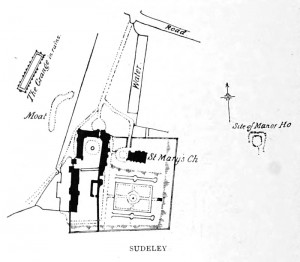 The next year Lord Chandos recovered his castle, only to lose it again in 1644, and it would appear that owing to the irreparable damage which the finest parts had received in these two attacks, the buildings were abandoned to ruin, remaining desolate for nearly two centuries. Lord Chandos died in 1654 s.p., when his second wife marrying again with George Pitt, ancestor of the Rivers family, this castle and manor came into their hands, and so remained till Lord Rivers in 1810 sold the castle and sixty acres of the estate to the Duke of Buckingham, who in 1837 sold the castle to Messrs. John and William Dent, of Worcester, who had previously in 1830 bought the bulk of the Sudeley estates. ‘They restored a great part of the structure with admirable taste, and preserved the old fabric with much care. The first N. quadrangle was rebuilt, at a large outlay, and the ruinous desecrated chapel has been made “a most exquisite gem of ecclesiastical architecture:’ (Strickland.) The remainder is still a picturesque and interesting ruin, probably much the same as it was in Leland’s days.

In 1782, the body of Queen Katharine Parr was discovered, and, being unearthed, was found to be in wonderful preservation under the broken tomb; the hair of the Queen was sandy-red in colour, and the coffin measured 5 feet 9 inches in length. The remains were re-interred, and a new tomb, made after a drawing preserved of the original one, was erected in memory of our first Protestant Queen.

A writer who visited the ruins in 1799 says that the castle “consists of a spacious court, surrounded with buildings now used for a farmyard. The tower adjoining to the gate is square and open to the top; the other, at a little distance, is round, and a winding staircase runs up the inside; adjoining is the stonework of some very large windows. There is a long building, called the Castle Barn, the gable ends of which and the walls are all that remain standing. The keep is on the opposite side of the castle and has no roof to it”. This was as the Dents found it.

One tower, of the fourteenth century, has been preserved between the ruins of the hall, of the fifteenth century, and the present Elizabethan buildings. The walls of the chapel remain perfect. There are two spacious quadrangles lying N. and S., with the lofty embattled tower on the W. side, and the banqueting hall with an octagonal tower on the E., on which side were likewise the chapel and the gardens. In 1850 the old pleasaunce with its paths and fountains was discovered, and now forms part of the gardens.