St Briavels Castle is situated on the edge of a steep scarp above the River Wye and is believed to have been sited on this spot to control a nearby ford at Bigsweir. The castle is thought to have been built on the site of an earlier motte and bailey, which was constructed after William Fitz Baderon acquired the estate in 1086 AD. A square stone keep over 100 feet high was constructed on top of the motte in the 12th century.

It was used as a prison until 1842 before restoration in the late 19th century and use as a youth hostel from 1952. The extant remains mainly date from the 13th century and include a dry moat, rubble curtain walls, parts of the square keep, the domestic range, the site of the hall, and the twin towered gatehouse with a defended passage. (Pastscape) 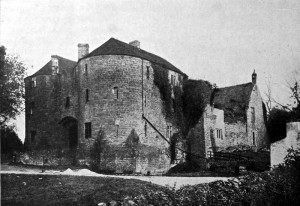 A nearly perfect house of the early thirteenth century, standing on an elevated spot over the river Wye, and anciently called Breulais. Camden describes it as surrounded with “inaccessible thickets, more than half ruined, and remarkable for the death of Mahel, youngest son of Milo, Earl of Hereford”. The castle was begun in the reign of Henry I. by the said Milo FitzWalter, and was, like most of these border fortresses, intended to curb the Welsh, and prevent their incursions on the marches. Its period is chiefly Transition-Norman, and it is a fine specimen of a well fortified mansion of that age. But little of its history can be gathered. King John often resorted thither, and one of his Queens resided there; but whether this was Hawisia, the divorced one, or Isabella, the wife of Count de la Marche, cannot be known. Part of the building may possibly belong to that reign, as indeed to that King are ascribed by popular tradition a vast number of the old houses in England. The buildings were very extensive and appropriate for a royal residence—they probably covered the whole space within the walls—in later days turned into a garden. A royal forest in the vicinity was attached to the castle, therefore the attraction of hunting may have brought King John there, besides Henry III., who also visited St. Briavel’s.

This Mahel FitzWalter was, doubtless, an important person in Dean, that his manner of death should be chronicled thus. Atkyn’s says he “was cruel and covetous, and, being entertained here by Walter de Clifford, and a fire happening in the castle, a stone fell from an high tower on his head, and killed him in the place. A daughter of this Mahel was married to Herbert, who, in right of his wife, was Lord of Dean, and progenitor to the present Herberts, Earls of Pembroke and Montgomery”. Among the governors of this castle was Thomas de Clare, brother to Gilbert, the Red Earl of Gloucester (See TONBRIDGE), appointed by Simon de Montfort, after the defeat of Henry III. at Lewes in 1264.

Edward II. made Hugh Despencer the elder governor of St. Briavel’s and of Dean Forest in his fifteenth year. Thomas, Duke of Cornwall, had the trust (14 Richard II.), and Henry V. gave it to his third son, John, Duke of Bedford. Richard Nevill, the great Earl of Warwick, and Anne, his wife, were seised of this castle and manor; but in 1608 the lands were in the hands of the Crown, and in 1660 the constableship was given to Henry, Lord Herbert of Raglan, for his life. The Duke of Beaufort is the present lord of the manor.

The outer walls and the moat are perfect; the circumference of the castle, of horseshoe shape, is small, and the exterior of the outer wall does not seem to have ever had bastions, such as most castles of the fourteenth century possess, but to have had the whole area within crammed with buildings. The principal strength was in the gatehouse, as at Abergavenny; it had two powerful square flanking towers, having rounded outer angles, three storeys each in height, and with a large oblong tower behind them, wherein the defence was concentrated and the numbers of the defenders were economised. One of the most remarkable features about the castle is a large room, somewhat resembling our old House of Lords at Westminster; but before this part of the castle could be entered there were the two flanking towers to be carried, as well as the large one beyond, built on to them, now dilapidated; and then there was, besides, the Keep, which fell down into the moat, late in the 18th century, and which had its own postern. There are curious and intricate passages and staircases contrived in the walls of the entrance towers. The great Hall has, unfortunately, been destroyed, but the solar, or lord’s chamber, at the upper end, remains, and was some time ago used as a school-room; it contains a fine fireplace, above which is the well-known chimney, with one of the most beautiful chimney-tops in England. At the lower end of the hall some servants’ apartments have been left, connected with one of the gatehouse towers, which is nearly perfect, and contains some small chambers of this period, each having its own fireplace and chimney. The habitable part of the castle in Gough’s time was used as a prison for offenders and debtors.

The N.W. front alone remains now; the other portion of the castle had become a mass of ruins in the middle of the 18th century.(Castles Of England, Sir James D. Mackenzie, 1896)