Castle founded by William the Conqueror as a motte and bailey in 1066, rebuilt during the reign of Edward I as a residence and fortified in 1323. The castle started to fall into disrepair in 1485 and was subsequently rebuilt in the 16th century. During the Civil War the castle was fortified with a complex of earthworks and gun emplacements. The building was remodelled in 1660 and in the mid 19th century to designs by A Salvin. It is built of limestone ashlar with a Collyweston slate roof.

Open to the public, Rockingham Castle has been owned by the Watson family for 450 years, and is an award winning attraction.

The House and Gardens are open to the public. 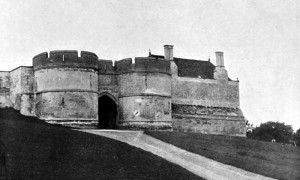 In the N. of the county, bordering on Leicester and Rutland, is the elevated tract of land bounded N.W. by the Welland river, and S.E. by the Nene, called Rockingham Forest, and on its N. side, toward the former river, on a rock or spur of the hill, is this castle, protected on both sides by steep ravines, a situation of strength that, in very early days, recommended it for a stronghold; hence we find in Saxon times a chief named Bovi had his dwelling here on a lofty mound, which, as elsewhere, caused it to be chosen by the Conqueror for the site of a Norman shell keep. This mound is now 100 feet in diameter at top, and is 30 feet high, having a broad and deep ditch round its base; it stands at the S. of a plot of flat land on which the main castle buildings, with their wards, were afterwards ranged; and from the mound westward extended a line of wall, of which the greater part remains along the edge of the ditch and ravine northward, and round on the E., enclosing the buildings and courtyards. This curtain wall is well buttressed and hits circular mural towers at the angles, with the great entrance gatehouse on its E. face.

As this forest was one of the largest in the kingdom, extending from Northampton in the S.W., to Stamford in the N.E., and was a Royal demesne, it is possible that in visiting the place for the purposes of sport William I. ordered the fortress to be erected as a strong hunting lodge (like Knepp, in Sussex, and others), and its custodians were usually seneschals of the forest. In the reign of Edward I. the forest was eight miles wide, and before Leland’s time was said to contain red deer. Other buildings must have been made at the same time as the keep, for in 1095 the Red King summoned a great council of prelates in the chapel of Rockingham to settle a grave dispute between himself and Archbishop Anselm regarding allegiance to the Pope. Richard I. was here in 1194 together with King William the Lion, and John came no less than fourteen time between 1204 and 1216, in his most troublous days, for the purposes of sport and relaxation. Hunting was a necessity in those times, when markets were few, and supplies hard to get, in order to feed the crowd of people who hung upon the Court. Some of this King’s deeds are dated at Rockingham, and each of the four succeeding Sovereigns paid several visits here. Wine used to be imported from France at Southampton and Porchester, and sent to the various castles visited by the Court. Coeur de Lion gave “la Ville de Rockingham” to his Queen Berengaria, but on his death his brother seized the property and settled it on his own wife, Isabella. In 1217 William de Fortibus, Earl of Albemarle, was appointed constable, but rebelled soon after, and when, two years later, the Queen Mother, Isabella, having married her original fiance; the Count de la Marche, petitioned for the restitution of this castle, Albemarle refused to cede it. Then the henchman of King John, Falk de Brent, or Breaute (see BEDFORD), was set on him, and laid siege to Rockingham with rams and catapults and all the engines of war then in use, the young King being present. The castle stood out, but was taken by surprise by de Brent, when only three loaves were found left in the place. Considering the characters of de Brent and Albemarle, and their subsequent history, it seems likely that the surrender of the castle was the result of an arrangement between these two worthies. 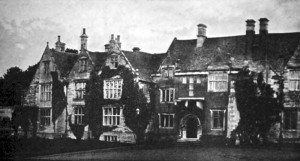 Large repairs were then necessary, and when they had been carried out, in 1226, the King paid a visit here. Many different constables were appointed to Rockingham during his disturbed reign.

Edward I. came hither in 1275 and caused extensive alterations and additions to be undertaken, among them being a new hall, the walls of which are still standing, and from the sides of the present hall, the vestibule, and the dining-room. It is calculated that at this period a sum equal to £20000 of our money (1896) was expended on the works.

Several prisoners taken at Dunbar, in 1294, were confined here.

Rockingham was settled on Isabella of France, the bride of Edward II., who appears to have gone there on three occasions, the last time in 1323.

Edward III. used the castle as a resting stage when on his expeditions into Scotland, and gave it to his Queen Philippa in dower; but at that time the buildings were in a ruinous state. As the means of living became easier the value and importance of forests and parks decreased, lands formerly afforested were cultivated, and their residences neglected. (Clark, Hartshorne.)

In 1454 Henry VI. settled the castle and lordship, with its forest, upon his Queen, Margaret, and Edward IV. did the same in favour of his wife, Elizabeth Woodville, for her life. Henry VII. made the same settlement, in 1498, on his Queen, the White Rose of York.
Then, after more than 400 years of Royal possession, came a change. At Lyddington, on the S. march of Rutland, is an interesting village, once the ancient manor-place of the Bishops of Lincoln; one Edward Watson, a landowner of old lineage, was married to Emma Smith, the niece of Bishop William Smith, and became Surveyor-General of the rich diocese of Lincoln. He died in 1530, and his grandson Edward married Dorothy, daughter of Sir Edward Montague of Boughton, Lord Chief Justice of England, and obtained perhaps through his father-in-law, from the Crown, a lease of the castle and park of Rockingham. The old castle being then uninhabitable, he took up his abode in the lodge in the park—the moat of which is still apparent and marks the site of the house—and one of his first works was to repair and rebuild the castle.

He divided the old hall by a floor and partitions, as we see it, and built the portion between it and the walls. There is the date of 1579 carved on a beam. He died in 1584: his son Edward was knighted by James I. in 1603, and two years later this monarch came and spent six days at the castle, hunting.

In 1608 James knighted Lewis, eldest son of Sir Edward, married to the daughter of the tenth Baron Willoughby d’Eresby, who (13 James I.) purchased from the Crown the fee simple of the whole property, the King reserving, how¬ever, a right to come here to hunt, which he did in 1619. Sir Lewis married the daughter of John, eighth Earl of Rutland, and was created a baronet in 1621.

He was at heart a Royalist, but being drawn by family connections in the opposite direction, evidently endeavoured to hedge, with the result that, mistrusted by either faction, he was attacked by both, and suffered accordingly. In March 1643 Lord Grey of Groby, son of the Earl of Stamford, a young leader of a Parliament force of 8000 men, came suddenly to Rockingham, and took possession of the castle and everything in it, turning out the owner and all his people. Sir Lewis was at once laid hold of by the King’s men, and sent prisoner to Belvoir, on the charge of not attempting to hold his castle for King Charles. From thence he was sent to the castle of Ashby-de-la-Zouch, where he was detained till he should disprove the charges of disloyalty.

Then the defences of the castle were strengthened by the Roundheads, especially the keep mound, in the manner shown in a drawing preserved among the Rockingham Papers, which is interesting, as showing the mode of fortifying such earthworks at that period. The summit of the mound was formed into a hexagonal platform for ordnance, and below it was placed a ring of casemates for soldiers, six of the rooms being built with chimneys. Outside these ran a circular walk separating these barracks from a circular range of stores, at a lower level, which was defended by a parapet, and then a palisade encircling the mound. Below this again ran a covered way round the mound, protected by another parapet, and having in front another line of palisades at the foot of the hill. Altogether a very formidable work, before the days of modern shell fire.

When Charles had given himself up to the Scots army, the Parliament reduced the garrison here, and caused the works to be demolished, and a part of the mound thrown into the ditch, but they continued to occupy the castle to the end.

Sir Lewis was removed to Oxford, there to be tried on the charges of disloyalty; but he appears to have disproved these so clearly, and to have shown so strong a counter-case in the losses he had sustained, that, in 1644, Charles made him Baron Rockingham, of Rockingham Castle; but, since, on giving up Oxford to the Parliament all the documents of the King’s Oxford Parliament were burnt, we cannot know in what way Sir Lewis Watson proved his case.

After the battle of Naseby, which took place not far off, many prisoners were lodged here. In the reign of Charles II. the manor was held by the service of keeping twenty-four buckhounds and five harriers for the king by the Watson family, who still retain and inhabit the old stronghold.

The great entrance gatehouse is of the Decorated period, being built about 1200; the gateway is flanked by two fine semicircular towers with an embattled parapet. This gives admission to the outer ward, wherein are the lodgings, with an old Decorated entrance, and the hall of Edward I., divided (temp. Elizabeth) as before mentioned.

Between the end of the hall and the curtain wall is a fine range of buildings, bearing date 1585, with a kitchen and various offices. When Leland visited Rockingham he saw much that has now vanished; he says: “The kepe is exceed¬ing fair and strong, and in the waulles be certain strong towers. I marked that there is a strong tower in the area of the castelle, and from it over the dungeon dike is a drawbridge to the dungeon toure”. All this has perished. The walls were provided with a double parapet, to give cover on both sides, and there was once a second great gate; the castle well was on the S. side of the keep. (Castles Of England, Sir James D. Mackenzie, 1896)