Manor house, built 1330-40 by the de la Mare family. The hall and gatehouse survive, with early 16th and early 17th century alterations. The house is constructed from coursed stone rubble with steeply pitched Collyweston stone roofs. Associations with Oliver Cromwell. Not open to the public. 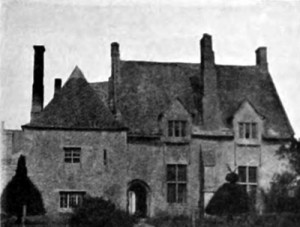 Once a defensible manor-house, about seven miles from Peterborough, at a village anciently called Norburgh. There is not much recorded of it, except that it was originally of far greater extent, a considerable part of it having been pulled down towards the end of the last century.

In the third year of Henry III., one Brian de la Mare, possessing property here, held the office of forester in the Kesteven district of Lincolnshire, and his descendant, Geoffrey de la Mare, held a knight’s fee in Norburgh (26 Edward III.), and married the daughter of Geoffrey le Scrope, one of that King’s judges. He is supposed to have been the builder of this so-called castle about the year 1350, or some time in the latter half of the fourteenth century, and the de la Mares were in possession of it still in the reign of Henry VIII., when, as the manor formed part of the endowment of the monastery of St. Pega (Peakirk is the adjoining parish), the estate was alienated and passed to the Fitzwilliams. There were two manors in Northborough, one of which, in Elizabeth’s reign, belonged to a family named Brown, and was afterwards bought by the Claypooles. John Claypoole married Elizabeth, the second daughter of Oliver Cromwell, whose wife (Elizabeth Bourchier), died here. There was, in the lost parish register, the entry: “Elizabeth, the relict of Oliver Cromwell, sometime Protector of England, was buried Nov. the 19th, 1665”.

The first Claypoole known here was named James, a worthy yeoman, who, in 1571, bought lands in Northants, and, in 1572 the manor of Northborough, for the sum of £500. In 1588 he obtained a grant of arms, sculptured thrice on his tomb. His son, John, who succeeded, was knighted by King James, and the grandson, John Claypoole, of Northborough, was a violent Republican, and served in the Long Parliament as member for Northants, being made a baronet by Cromwell. It was his son who was married to Cromwell’s favourite daughter in 1643; she was an ardent Royalist, who, being seized with a fatal and painful illness, is said to have unsparingly upbraided her father for his actions. She died at Hampton Court in 1658, and was buried in Henry VII.’s Chapel at Westminster, where her grave was found in 1725. Her husband became Master of the Horse to Oliver and to Richard Cromwell, living chiefly at this, his seat, where it is said that the Protector sometimes spent Christmas. Hither, as we have seen, his widow retired, and here she died. John Claypoole, in later years, becoming involved in debt, resigned the estate to his eldest son, and lived in London, where he died in 1688. (Noble.)

The only portions remaining of the original building are the gatehouse and hall, standing on opposite sides of the court, and some of the masonry adjoining the hall. In its complete state it probably consisted of a quadrangle surrounded by a moat, which, later, may still be traced. The gatehouse has a fine moulded arch on both sides, with a once vaulted and groined passage between, and on the left was a small stair leading to a guardroom over. As in the case of its elder neighbour, at Woodcroft, there is no portcullis. Facing the entrance, at a distance of 50 feet, is the hall, 36 feet long by 26, lighted by square transomed windows on each side: at one end was the screen and a passage through, having doors at each end and a minstrel’s gallery above, and in this passage three doors gave communication with the kitchens, butteries, &c. The porch seems of the date of Henry VII., and connected with the building are erections for stables and offices, of the time of Charles I., during whose reign the old building appears to have been in great part destroyed, and the hall divided into floors, with dormers to light the upper rooms, perhaps for the accommodation of the Claypooles and Cromwells.

As to marks of fortification or defence, these, besides the moat, are only now to be seen in the loopholes, but the name of castle has been borne since earliest times. Externally, the details of the masonry in the hall are extremely beautiful; the west gable is enriched and terminated with a chimney of exquisite design and execution.

In the S. aisle, or transept, of the adjoining church, erected about the same period, was the burial-place of the family of the founder, where are two arched recesses for tombs that are no longer to be seen. Curiously, in the churchyard of the neighbouring parish of Clinton, are two mutilated stone effigies of a knight and a lady; the former wearing, besides his armour, a bugle horn at his side, the badge of a forester, with marks which connect him with the De la Mares, the foresters of Kesteven; and so they are supposed to represent Geoffrey de la Mare and his wife, the daughter of the last de la Scrope of his race, the builders of the manor-house and church of Northborough. (Parker.)

To explain the removal of these effigies: it is possible that, after the Restoration, the zeal of the natives, who connected them with the dwelling of the Puritan Claypooles and with the Cromwells, led them to expel the figures, which were not even received into the new church, but left where they now lie. The body of Cromwell himself is said to have been re-buried at Northborough after its inhuman treatment at the Restoration. There is a statement by a servant that she saw the body carried by horsemen through Huntingdon, where she had expected they would remain with it, and no likelier place of interment can be conceived than the home of his wife and favourite daughter.
(Castles Of England, Sir James D. Mackenzie, 1896)