Set in the peaceful Wiltshire countryside beside a lake, Old Wardour Castle, near Tisbury was once one of the most daring and innovative homes in Britain. It was built in the 14th century as a lightly fortified luxury residence for comfortable living and lavish entertainment. Today the castle ruin provides a relaxed, romantic day out for couples, families and budding historians alike. (EH) 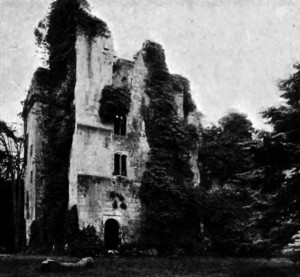 The present grand mansion of Lord Arundell of Wardour is distant about a mile from the ancient castle of that name, .which stands, draped in ivy, in the midst of beautiful woodlands. At the Domesday Survey Waleran Gouel, afterwards written Lovel, son of the Norman lord of Ivri, held Wardour; he is called Venator by the chroniclers, and was here temp. Henry I. His successor in the fifth generation, John, Lord Lovell, obtained (16 Richard II. 1392) a licence: ” Kernellare quoddam manerium suum de Werdour—et castrum inde facere”; and as these permissions were generally obtained before the work was commenced, the end of the fourteenth century may be taken for the construction.

Philippa, daughter of John, Lord Lovell, married John, fifth Lord Dinham, or Dynham (whose family originated in a Norman possessor of Dinan, now Ludlow), bringing Wardour, into this family. Their son, Sir John Dynham, who served in the French wars of Henry VI., was the last Lord Dinham, his youngest daughter, Catherine, being married to Sir Thomas Arundel, of Lanherne, Cornwall, who inherited from his mother the castle and lands of Chidiock, Dorset (q.v.).

This Sir Thomas, descending, as believed, from William, first Earl of Arundel, who married Queen Adeliza, widow of Henry I., was Squire of the Body to Edward IV., and being attainted by Richard III, was restored in blood by Henry VII., and died in 1495. His son, Sir John, married Lady Elizabeth, daughter of Thomas, first Marquis of Dorset, the half-brother of Edward IV. He, dying in 1545, left two sons, Sir John Arundel, of Lanherne and Chidiock, and Sir Thomas Arundel, knight banneret, married to Margaret Howard, sister to Queen Catherine Howard. In 1547, Sir Thomas purchased Wardour Castle from his kinsman, Sir Fulke Greville, who had acquired it by marriage with the heiress of Lord Willoughby de Brooke’s family, to whom the property had come originally from the Crown. He was one of the friends of the Protector Somerset, and was brought to the block in 1552 with him by Northumberland, his son, Sir Matthew Arundel of Wardour, being restored by Mary on her accession in 1553. Sir Matthew died in 1599, and was succeeded by his son, Sir Thomas, the famous soldier, called “the Valiant”, who was made a Count of the Holy Roman Empire by Randolph II. in 1595, for capturing the standard of the Turks at the battle of Gran, in Hungary, and was, in 1605, created Baron Arundel of Wardour by King James I.; from him the present noble family, the owners of Wardour, directly descend. It will be seen, Yeatman remarks in his “House of Arundel”, that the Lords Wardour represent the heir of Waleran, the Domesday holder of Wardour, through the families of Fitzpain and Chidiock, and that again they directly descend from the builder of the old castle, John, Lord Lovell and Holland, through the family of Dinham, while lastly they descend from Lord Brooke, the purchaser of the castle from Lord Ormond, through Margaret, the daughter of Henry Willoughby, of Wollaton.

To return to the Lovells. That family were staunch Lancastrians, and, on the ascendancy of the White Rose, Edward IV. granted Wardour to John Trouchet, Lord Audley. He died in 1491, having probably only held this castle for the King, and in 1495 it was in the hands of Thomas Boteler, Earl of Ormond, who, in 14 Henry VII., sold it to Robert Willoughby, Lord Brooke (Charter at Wardour). In 22 Henry VIII. Elizabeth, granddaughter of Lord Brooke, being the wife of Sir Fulke Greville, obtained possession of Wardour, and from him it came to the Arundels, as above detailed.

Thomas, second Lord Wardour, was married to the Lady Blanche Somerset, daughter of the valiant old Marquis of Worcester, who so stoutly defended Raglan Castle, and a most worthy daughter too, since she was the heroine of the siege of Wardour Castle in the Parliamentary War.

Wardour Castle was attacked in 1643 by a force 1300 strong under Sir Edward Hungerford, during the absence of the owner with the King at Oxford, when the custody of the castle was left with his wife. On receiving a summons to surrender, Lady Arundel firmly refused, and with her small garrison of fifty, only half of whom were soldiers, made a stout defence for five days, she and her maids loading muskets for the men. The Parliamentary commander placed guns before the castle and battered the walls, and two mines were sprung under them, the second of which shook and damagecl the whole fabric. At last, crippled by want of provisions and stores, the gallant lady was unable to hold out, and capitulated on terms highly honourable. These were at once violated by the Roundheads, and although the articles prescribed that all the goods and valuables in the castle should be safeguarded, it was plundered of all it contained, even the clothes of the ladies being seized; the trees were cut down about the house and grounds, the fences of the parks pulled up, and the deer killed or let loose; the fishponds even were destroyed, the horses and cattle driven away, and the lead water-pipes torn up and sold. The losses were estimated at £100,000. Lady Arundel was separated from her children, and sent away prisoner to Bath. Then the place received a garrison for the Parliament, under Colonel Edmund Ludlow, an active Parliamentarian, who held it till March 1644, when the young Lord Arundel (his father having died of wounds received at the battle of Lansdowne), invested Wardour, and, after a long siege, in which he had almost to destroy his own home, captured it, as related in the Ludlow Memoirs. It was never afterwards inhabited by the family, whose mansion was built on gently rising ground in the neighbourhood.

The remains are those of a fortified mansion of the commencement of the fifteenth century. A low outer wall enclosed a large outer ward, or bailey, of which the gatehouse has been rebuilt. The inner court is small and hexagonal, having unusually fine and lofty buildings surrounding it, the inner walls next this court being nearly perfect. A state staircase, with groined roof, leads from the court to the great hall on the first floor, where the windows and the vaulted basement below it remain. The arrangements at the lower end of the hall, with doorways to a garderobe chamber, and the dais at the upper end, can be seen; on the same floor, beyond the screens, is the kitchen, with very good windows. Beneath the hall runs a vaulted passage, connected with the postern-gate, having a portcullis at each end of it. There are extensive remains also of the moat, which was of unusual width. (Parker.) The plan of the structure was a singular one, being a hexagon with one of its sides projected in the form of two square fronted towers, between which is the long vaulted passage leading into the central court. (Castles Of England, Sir James D. Mackenzie, 1896)