Old Sarum is situated about 3 km from Salisbury, at the west end of a westward facing chalk spur overlooking the River Avon. The site comprises of a multivallate Iron Age hillfort, evidence for Romano-British occupation, evidence of a Saxon burh and mint, a Norman royal motte and bailey castle, a cathedral and bishop’s palace and later castle structures.

Today, 5,000 years of history are told through graphic interpretation panels on site. Families, heritage lovers and walkers can enjoy a great value day out at Old Sarum- you could even bring a picnic and enjoy the fantastic views across the Wiltshire countryside. The gift shop has a delicious range of ice-creams and exclusive English Heritage gifts and produce. Wooden bows and arrows are also on sale to help the kids imagine what life was like all those years ago! (EH) 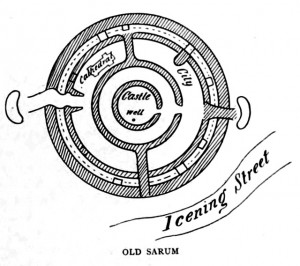 Most of those who travel to Salisbury are aware of the mighty mound of Old Sarum, about a mile and a half N. of Salisbury, still showing its massive lines of rampart, which have survived from time immemorial, and were formerly capped by an ancient castle on the centre summit. It is pretty certain that this hill was one of the chief fortresses of the early Britons, taken from them by Vespasian, during the reign of Claudius, at the time of his reduction of the Belgae, who inhabited the counties of Hants, Wilts, and Somerset, and it was known to the Romans as Sorbiodunum. Advantage must have been taken of a conical hill to form this extraordinary circular stronghold, measuring 1600 feet in diameter, and included within an outer ditch of prodigious depth, on the inner edge of which was formed a broad rampart, upon which ran a wall, 12 feet thick, along the entire ring of the circuit. Within was a broad space which contained the city and cathedral of Sarum, and on the inner side of this was another very deep ditch, concentric with the first, around which rose another lofty rampart, on the further side, surmounted with a ring of wall, 500 feet in diameter, enclosing the inner court, on which was placed the castle, surrounded again with its own outer wall of defence. Dr. Stukeley, who visited the place in 1722, and gives drawings of the fortress, says it was divided, like a camp, into four quarters, two of these having a gate and that at intervals of 400 feet round the older wall arose square towers. A large piece of this wall remained, and in the huge annular space, which contained the city and was then ploughed land, he could trace the foundations of the old cathedral and of the episcopal palace and other buildings, though nothing like a building was then left, the whole having been removed to afford materials for the new town of Salisbury. Even in the time of Henry VIII. the town of Old Sarum was in ruins.

Centuries have now elapsed since that old city ceased to exist, and the Reform Act extinguished the very fiction of it as a Parliamentary borough. The fourteen freeholders no longer meet under the “Election Elm” to choose their representative.

It was at Sarum that Cerdic, the founder of the West Saxon kingdom, fixed his seat, in the beginning of the sixth century, and throughout Saxon times there must have been a castle here, probably of timber and stones, to be followed by something more substantial and important in later times. At this fortress, on the conclusion of the Domesday Survey in 1086, William I. collected by summons all the bishops, abbots, barons, and knights of the kingdom, to do homage for their feudal tenures, when on formal surrender of their lands they received them back under a new grant. And in 1091 the Conqueror signed here Bishop Osmond’s charter for the new cathedral, built within these fortifications. Rufus, in 1095, held a great council at Sarum, when two of his nobles, William, Earl de Owe or Ou, and William d’Aldari, were impeached of high treason, and being beaten in their trial by duel, suffered the barbarous penalty, the first being blinded and mutilated, and the latter flogged and then hanged, the brutal King presiding. In 1107 Henry I. placed his favourite priest, Roger Poor, in the See at Osmond’s death, and committed the castle to his charge, when it was encircled with an entirely new wall, and the strength was much augmented by this great castle architect (see DEVIZES). The Court residence was fixed here, and in 1116 all the barons of the realm were again assembled to swear homage to the King’s son William, as his successor. Stephen seized this castle, as he did Devizes and Sherborne, and throughout the nineteen years of trouble that fell on the land Sarum was occupied and injured in turns by both Stephen and the Empress; besides which the churchmen and the inhabitants were greatly oppressed by the soldiers of the garrison above them, and were desirous, by the time that Henry II. ascended the throne (1154), of vacating their unsettled and confined quarters. A want of water and proper drainage must also have combined to make the place an objectionable residence for people becoming more and more refined each reign. At length, in 1219, the papal mandate being obtained, a new church settlement and a temporary church were transferred to a beautiful site in the meadows, where now stand both the cathedral church and the town of New Sarum, or Salisbury. The old hill was deserted, the inhabitants moving even the stones of their former habitations to the new site, where, besides other advantages, they had the benefit of a pure river, the Avon, flowing through their midst. With this desertion of the stronghold, the importance of the castle decreased, and the pacification of the western country diminished it further.

Stephen had given this castle to Patrick d’Enereux, grandson of Edward, first Earl of Salisbury, whose son William succeeded to the dignity. William Longepee, who married Ella, Countess of Salisbury, was the next governor, but his son was deprived by Henry III. of both his earldom and castle. His daughter, however, Margaret, the wife of Henry Lacy, Earl of Lincoln, was soon after restored to both, as Countess of Salisbury, and the honours were continued to her only child Alice, married to Thomas, Earl of Lancaster (see PONTEFRACT). When this noble was attainted, Edward III. transferred his lands and title to William de Montacute, who being challenged, as to his right to the castle, by “the warlike Bishop Robert Wyvil to the test of single combat, effected a compromise, selling the castle to the bishop for 2500 marks (£1667). It appears, however, to have again lapsed to the Crown, as Henry VI. bestowed it, with the Earldom of Salisbury, on the father of Richard, Earl of Warwick—the King-maker; then one of the Lords Stourton had it, and afterwards Edward IV. gave it to his brother Richard, and from that time to the reign of Henry VIII. we hear little of the place. Leyland then visited it, as he did every corner of the land, and reported: “There was a right fair’ and strong castelle within Old Saresbyri, longging to the Erles of Saresbyri, especially the Longspees. Much notable ruinous building of this castelle yet there remaynith”. But now scarcely a vestige remains of anything but some foundations, nor is there any record of what constituted the buildings of the castle, the only access to which was through a single narrow passage in the eastern rampart. A curious subterranean passage was discovered in 1795 leading from the citadel, and descending, by steps cut in the chalk rock, to the outer ditch, a depth of 114 feet. Within the keep is a depression where the castle well existed, and it is said there were four other wells within the stronghold. (Castles Of England, Sir James D. Mackenzie, 1896)