Also known as the Hillings. Ringwork and bailey with partly underlying Saxon cemetery and settlement identified from excavations. A large horse-shoe ditch enclosing on the river side two sub-rectangular wards. Excavated 1949/50. In the northern ward were found at least 40 Saxon burials (associated with St Neots pottery) and there had probably been a settlement and a Church (stone and mortar debris was found overlying the burials) defended by the horseshoe ditch which appears earlier than the other earthworks. Further excavations in 1962 located a 9th century Saxon settlement. (Pastscape) 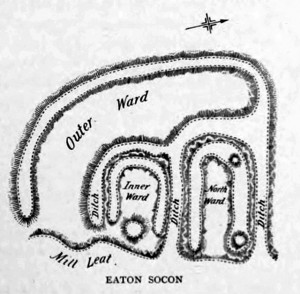 The Beauchamp family, in the reign of Henry II., had another seat at a point a short distance S. of St. Neots. Here the river Ouse, on its way through the flat lands which it intersects between this place and Bedford, at that period a region of swamps, skirted some higher ground on its right bank where stand the church and village of Eaton Socon, and here was raised, in Danish or Saxon times, a vast earthwork, known as Castle Hill, close to the W. or left bank of the river. The drawing given by Clark shows an enclosure formed by a wet ditch taken off at right angles from the river for a length of 140 yards, forming its N. front ; thence turning S. and curving back to the river bank again for 160 yards, enclosing about three and half acres thus by a moat, the land along this forming an outer ward. At some distance from this outer moat was a second one, curving back in the same way from the ditch on the N., and 40 to 50 feet wide, forming an inner enclosure divided again into two portions by another straight ditch, thus forming two inner wards, the one on the S. having another inner moat. In the centre of this is a low circular mound 40 feet in diameter, which, however, shows no traces of masonry; there are, however, two depressions which look like sites of ancient towers. These earthworks are very strong, as the moats are bordered on the inside by high ramparts, and they resemble those of Huntingdon, which lies a little farther on at the same river’s side. In Domesday, Eaton, or Eiton, is shown as held by Eudo the steward, but there is no mention of a castle, which name Norman surveyors would not give to a timber and earth fortress. In 1165 Simon de Beauchamp held the barony, under whom Hugh de Beauchamp held one knight’s fee; he was eldest son of Oliver, a cadet of Milo de Beauchamp of Bedford. Speed mentions Eaton as having a castle, and Leland speaks of the vestiges of one as being the property of Lord Vaux. (Clark.) The chief interest lies in the curious arrangement of the water defences as shown on Mr. Clark’s plan here given. (Castles Of England, Sir James D. Mackenzie, 1896)