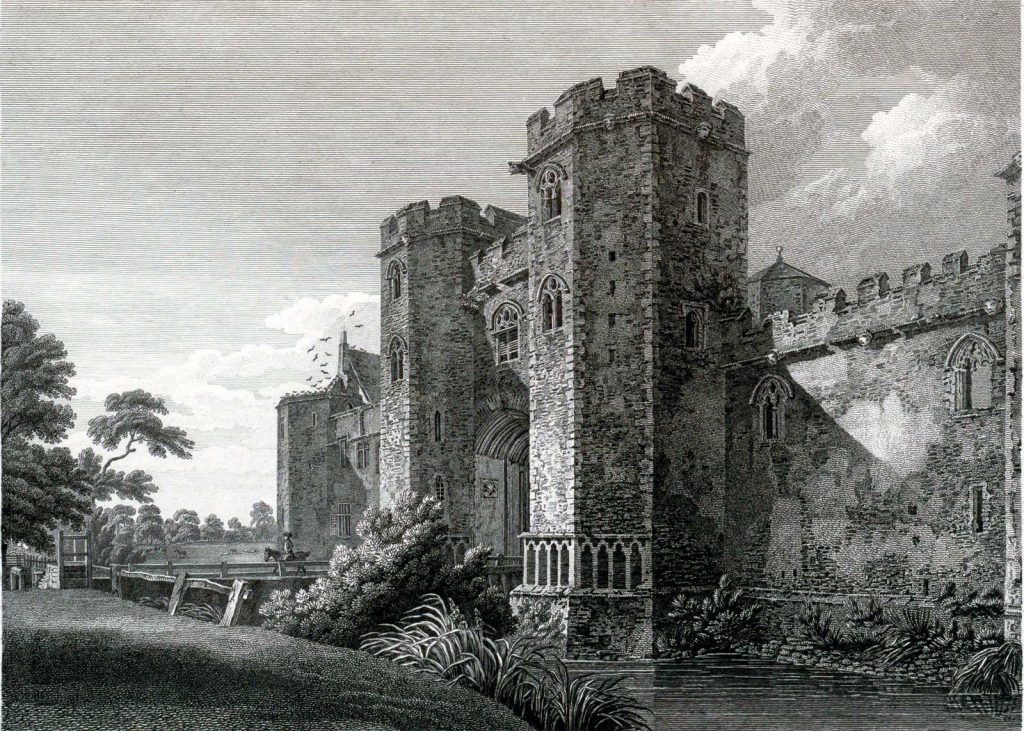 Remains of castle or fortified manor house licenced in 1384. Only the south curtain wall survives intact, incorporating a gatehouse and polygonal corner bastions. The foundations of the remaining walls can still be traced. The present house dates from the mid 16th century and was built into the remains of the western curtain wall. It is part stone-built and partly timber framed.

It is privately owned, visible from the common.

In the N. of the county, one mile from Syleham, between Eye and Bungay. The remains of this castle lie a quarter of a mile S.W. of the church.

The first mention of the place is in the ninth year of Edward I. when the lordship was in the possession of Richard de Brews, or Bruce, after which it appears as the property of an ancient family named Wingfield, settled here, according to family documents, before the Conquest. They were knights of the shire from 2 Richard II. to 6 Henry VI., and one or other of them was frequently high sheriff from 33 Henry VI. to the latter end of Elizabeth’s reign. Sir James Wingfield was a councillor and a favourite of Edward the Black Prince, and accompanied him to Languedoc in 1355. He was the last male of his branch, and his daughter and heiress, Katherine, Marrying Michael de la Pole, first Earl of Suffolk of his line, carried the estate into that illustrious family. In 8 Richard II. (1384) Michael de la Pole received a licence to crenellate his mansum manerii of Wyngefeld.

After the death of William de Ufford, Earl of Suffolk jure uxoris, of Orford Castle (q.v.), the earldom was vacant for four years, when Richard II. in his ninth year advanced his chancellor, this same Michael de la Pole, to be Earl of Suffolk. He was the son of a merchant of Hull, a man of great wealth, who had assisted Edward III. with large loans, to enable him to make his expeditions into France. His son Michael supported the attack of Henry of Bolingbroke against Richard II. and was succeeded in 1415 by his second soli, William, the eldest having been slain that year at Agincourt.

This Earl William became the great noble of Henry VI’ s reign, and was chiefly instrumental in effecting the marriage of the young King to Margaret of Anjou ; he was Lord Chamberlain and Lord High Admiral of England, and was made Duke of Suffolk. As the warm supporter of an unpopular Queen, Suffolk incurred the hatred of the people, and also on account of his supposed participation in the death of the good Duke Humphrey at Bury. His enemies obtained a sentence of banishment against him, and on his voyage to France they found means to intercept him near Dover, when, being forced to enter into a small boat, his head was chopped off on the gunwale. His body, cast ashore, was brought home to Wingfield and buried in the church there. He is the Suffolk of Shakespeare’s ” Henry VI.”

His son, John, married the Princess Elizabeth, sister to Edward IV., and lived in high favour with his brother-in-law, flying in 1491, when he was succeeded by his eldest son, John, third Duke, who, on the death of the son of Richard III., was by that King formally declared heir apparent to the English Crown. On the accession of Henry VII. Suffolk hastened to leave the kingdom, and sought refuge at the court of his sister, Duchess of Burgundy, the active plotter against the Tudor King.

After his death his brother Edmund took up the earldom, and was imprisoned by Henry VIII. in the Tower, and on that monarch undertaking, in his fourth year, his expedition to France, he had Suffolk beheaded, jealously fearing his pretensions to the throne; and the property and lands were confiscated (1513). It is right to add that Suffolk had been left a prisoner by Henry VII. with the recommendation for his execution.

A long while after the Manor of Wingfield came to the Catlyn family, on the extinction of which it devolved on the heirs of Thomas Lemon of Wenhaston. It is now vested in Sir E. Kerrison, Bart. The Wingfield family afterwards migrated to Letheringham and Easton.

The drawing given in Buck’s “Antiquities” shows the deserted fortress much in the Same state as it is at present ; the grand S. front, with its noble Edwardian gatehouse in the centre, is still tolerably perfect. The line low-pointed gateway, with portcullis groove, is flanked by two magnificent lofty octagonal towers, three storeys high ; and on each side of it extend the curtain walls, terminated by an octagonal turret at either end, somewhat lower than the gatehouse, the whole front and towers being heavily battlemented. All this is the work of Michael de la Pole, whose arms, as first Earl of Suffolk, with those of Wingfield, are cut in stone on each side of the entrance. The W. side has been converted into a farmhouse. The situation is low, and the defence depended chiefly on the broad moat, and had no earthworks. The inner towers, with a drawbridge on the E. side of the moat, were repaired by an owner, Dr. Leman, who inhabited the castle. (Castles Of England, Sir James D. Mackenzie, 1896)