Earthwork and structural remains of a moated, fortified manor house and college of secular priests, the latter extant between 1394 and 1542. Understood to be privately owned and not open to the public.

This fortress, which was rather a fortified manor-house than a castle, lies two miles S.E. of Bungay. Here are the ruins of a fourteenth-century fortress, built by Sir John de Norwich, who obtained a licence to crenellate his house from Edward III. in the year 1342. His ancestor, of the same name, is said to have come from a branch of the Bigods, Earls of Norfolk, and obtained this lordship from Edward 1. in 13oz. The father of the founder was Sir Walter de Norwich, Chief Baron of the Exchequer, in the reign of Edward II. His son, Sir John, was a valiant officer, who did good service in the French wars; he was governor of Angouleme, where he saved his garrison by a stratagem, related by Froissart. He possibly amassed considerable wealth by booty and ransoms, like other English leaders, and had licences to erect castles also at Ling and Blackworth in Norfolk.

His race died out in 1378 in his grandson Sir John, when the estate was inherited by Katherine de Brewes, or Brews, a widow, the daughter and heiress of Thomas de Norwich, brother of the founder, then a nun at Dartford in Kent. She, in 1382, made over Mettingham Castle to a college of ecclesiastics, who were removed from Raveningham in Norfolk to this place. They were a body of monks or clerics, who existed apparently for the sole purpose of saying Masses, and they continued here till the dissolution of the monasteries, when the place was granted to Sir Anthony Denny, and in the fifth year of Elizabeth it was sold to the Bacon family, and was used as a residence by the Lord Keeper Bacon. In 1675, the manor and castle were transferred by the Bacons to one John Hunt, whose grandson, Tobias Hunt, dying s.p., the property fell to his two co-heiresses, of whom the younger, Grace Hunt, married James Safford, of Ipswich, the great-grandfather of the present proprietor. 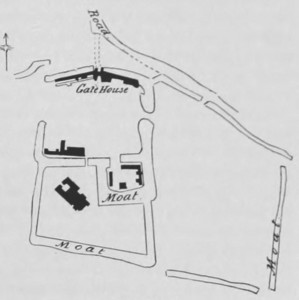 The castle stands about a mile S. of the church of Mettingham, and the ruins are extensive, the area of it, including the moats, being more than five acres. The whole forms a parallelogram, surrounded by a moat, and divided into two parts or courts by a cross moat running from E. to W.; each portion measures 88 yards N. and S. and 110 E. and W. In the southernmost of the two enclosures is another inner moat which surrounds the college. The northern award formed the castle proper, and was quite surrounded by a strong wall, a great part of which still stands; the most interesting feature being the noble Edwardian gatehouse, which remains tolerably perfect. It is a massive square building, with two lofty and narrow square flanking towers, containing two storeys above the pointed gateway passage. E. and W. of this run the wings of the curtain wall, as shown in Buck’s drawing of 1738 ; having once a square tower at each corner, and on the W. end, above the wall, are four windows, which belonged perhaps to a dormitory.

Sir John, the founder, was forced to leave his castle unfinished and to return to the French wars, and the work was continued by his wife, Dame Margaret, who built the keep, Leland says, on the W. side of the first court ; this was the residence of the founder’s family, and afterwards of the master of the college. The whole front of the gatehouse and walls are battlemented, and the gateway has a portcullis groove, and had a drawbridge over the moat.

It is remarked by Suckling that this building was a castle for only forty years, and was then held by ecclesiastics for 160. After Lord Bacon’s time the place was neglected. At last the habitable part was made into a farmhouse, which was eventually pulled down by Mr. Samuel Safford, who built a new house on the site, retaining in it an angle of the old keep. At this time, Suckling, who was curate of the parish, says he saw much of Dame Margaret’s work laid open, some of the interior decorations with colour and gilding being quite fresh. Some curious sculptured stones have been dug up, and six bells were recovered in cleaning the moat. The remains of the college stand within the inner moat in the S.E., and until 1839 possessed a picturesque turret which was called Kate’s Tower, after the donor, Katherine de Brewes, but which fell down in that year. (Castles Of England, Sir James D. Mackenzie, 1896)