Hertford Castle, a Grade 1 listed building originally built on the site of a Norman Castle. Beautifully situated in the heart of Hertford, yet hidden from the hustle and bustle of town life by the 12thC flint and stone curtain wall.

The Town Council offices are at The Castle and some of the rooms are hired out for weddings, conferences or special events. Although Hertford Castle Gatehouse is currently private offices and the home of Hertford Town Council and therefore not open to the general public, there are opportunities to have a tour.

It is open to the public for tours during Hertford Town Council’s Summer Events and weekday tours can be arranged by prior arrangement. 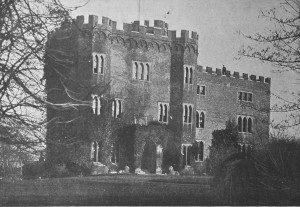 Edward The Elder, second son of the great Alfred, when commencing his campaign against the Danes in 912, laid hold of a ford over the river Lea, in order to protect the approaches to London and the southern counties, and there raised two mounds, one on the N. bank, between the little affluents, the Maran and the Beane, and another on the S. side of the Lea, crowning them with the customary Saxon ” castles” and stockades of wood ; the former of these mounds has disappeared, but that on the right bank became the nucleus of our Hertford and its castle. The Conqueror, who probably caused the castle to be built, made Peter de Valoines governor of Hertford, creating him Baron Essingdon and Beyford, and from him the manor came afterwards by marriage to Robert FitzWalter, of the Clare family, who enlarged it in Stephen’s reign. In the time of Henry II. Gilbert de Clare was styled Earl of Herndford.

In the end of King John’s reign this castle was taken after a siege of three weeks by the Dauphin Louis, and was held by the French after the king’s death. Then, in 26 Henry III., Richard de Montfichet appears to have possessed it, and after him it reverted to the Crown. Queen Isabella, the She-Wolf of France, resided and died here, her body being laid in the castle chapel till taken to London. After the battle of Neville’s Cross, in 1346, David, the young King of Scotland, was brought captive from the Tower (see BAMBURGH, NORTHUMBERLAND), and endured here a sad imprisonment of eleven years, during which, in 1362, his wife Joan, sister to Edward IiI., died in the castle, his country being too poor to pay the large ransom demanded for him by England. During this period another Sovereign, John, King of France, taken prisoner at the battle of Poictiers by Edward the Black Prince, was brought to this castle and confined in it.

Eduard III. granted to his fourth son, John of Gaunt, then Earl of Richmond, the castle, town, and honour of Hertford, so that, at the time of the deposition of Richard II., he, as Duke of Lancaster, was keeping his Court there. His son, Henry IV., settled the castle on his second wife, Joan of Navarre, and she enjoyed possession till 7 Henry V., when she was charged with practising sorcery and attempting the King’s life, and underwent forfeiture of her property and imprisonment in Pevensey Castle for the term of nine years, being only released by the King, her step-son, on his death-bed (see LEEDS, KENT). Hertford, meantime, was settled on Queen Katherine.

Henry VI. kept his Court here, and settled the castle on Queen Margaret. After his death, Henry VII. obtained it as heir of the House of Lancaster, and Henry VIII. succeeded his father. In 1533 the Princesses Mary and Elizabeth (an infant) were placed here at the time when Henry’s divorce degraded the former from her rank and succession, and here they were secluded for six years. Elizabeth, as Queen, resided occasionally at Hertford and held her Court in the castle.

Charles I. granted the manor and castle to William, Earl of Salisbury, who assigned a lease of it to Sir William Cooper, in whose family the property remained until the beginning of the last century, since which time has passed by purchase to various persons, the present owner being Mr. Alex. P. McMullen.

Besides the ancient mound, the old Saxon burh, standing on the edge of the river, little remains of the mediaeval castle, but a considerable portion of the enceinte wall, about 30 feet high and 7 thick, and a portion built into the mansion of Sir William Harrington (temp. Elizabeth), said to belong to the gatehouse of the outer ward on the N. The battlements have perished, but there remains at the S.E. angle, near the house, shrouded in ivy, a part of the circular bastion which capped this point. The ward on the S. depended for its defence on the river and surrounding marshes. (Clark.) The wall probably crossed the now obliterated ditch of the mound, and ended in a junction with a shell keep, which may have stood upon it, in the usual Norman method ; but of this there are no remains. The curtain wall, which is built of flint rubble, has been pierced of later years to admit a road to the present buildings, nor is there any trace of a main entrance, which may have been on the S. side by a causeway. Outside the wall are remains of the great moat, in which the waters of the Lea flowed.

The centre of the existing dwelling is a brick gatehouse of the period, perhaps, of James I., altered and adapted to modern requirements, and on either side are modern wings. Over the doorway is an old sculpture of the arms of France and England. The gatehouse has four octagonal turrets, one of these being carried up as a watch-tower ; underneath there are said to exist the old vaults and subterranean passage. Nothing remains of the buildings and lodgings of the old castle, a lawn and a pleasant garden now occupying the area. (Castles Of England, Sir James D. Mackenzie, 1896)