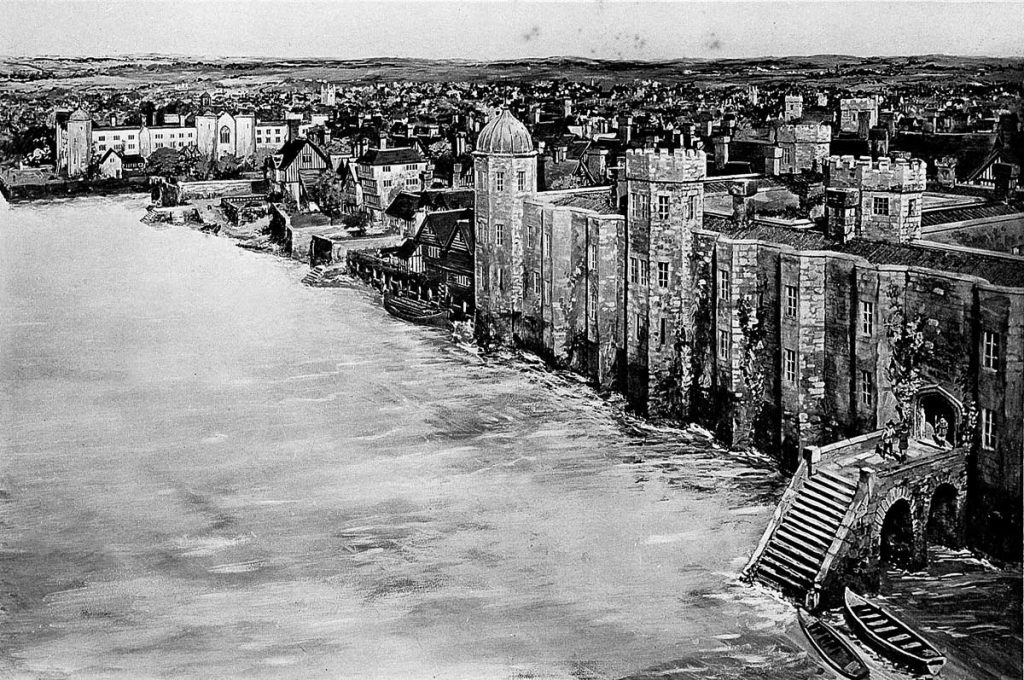 At the South-West angle of the City of London. Founded between 1066 and 1110. It was demolished in 1213 and the site was acquired by the Dominicans in 1276. A new castle was built east of Blackfriars in 1276 and was also called Baynards Castle. Excavations at Baynards Castle located part of the castle.

Besides the great fortress known as the Tower of London, the only other castle of importance in London was this one, which is said to have been erected by Ralph Baynard, one of Duke William’s followers from Normandy, to whom were granted the lands of Little Dunmow and others in Essex, and who from his connection with this stronghold at one time held the custody of the City itself ; he died in the reign of Rufus. William, the third baron, being attainted for rebellion by Henry I., his estates were given to Robert FitzRichard, fifth son of Richard de Tunbridge, son of Gilbert, Earl of Clare, steward and cup-bearer to the King, who in this way obtained William Baynard’s Castle by the Thames, and the offices pertaining to it ; he died in I198, his son Robert FitzWalter succeeding him. It was the attempt of the ruffian King John on the honour of this noble’s beautiful daughter, Matilda, or Maud the Fair, which brought the discontent of the barons to a head, in view of the indignity thus offered to one of the most distinguished of their Order. It is scarcely probable that the fair maiden was kept prisoner by John in the great circular turret of the White Tower, but the story goes that she, being at Dunmow, was there killed by poison administered in an egg. Her father, naturally siding with the dissentient barons, was banished by the King and had his castle despoiled. But when John, in 1214, after his invasion of France, had signed a five years’ truce with the French King, the two lately opposed armies lay facing each other on either side of a river. An English knight challenged the French army to a joust, and was taken up by an English knight serving in that army, who turned out to be this same FitzWalter. In the contest that ensued, FitzWalter defeated his challenger in such gallant style that John, learning who he was, forgave him, and granted back his lands and castles. Afterwards however, FitzWalter headed the resistance of the barons, and had the title of “Marshal of the Army of God and of the Church,” being, after the signing of the Great Charter, one of the twenty-five barons apppointed to enforce its observance. He was taken prisoner at Lincoln, and then went to the Holy Land, dying in 1134. His grandson, Sir Robert was summoned to Parliament 23 Edward I., and died 1325.

This baron, in 1275, alienated Baynard’s Castle in favour of Bishop Robert, of Canterbury, who moved into this building the Dominicans, or Black Friars, from Holborn ; but the rights belonging to Sir Robert FitzWalter, castellan and standard-bearer of London in time of war, are given in a document which has been preserved. His son Robert died in 1328, and Sir William, the third in line, was, in 1361, knighted for his bravery in war.

Walter, the fifth baron, died 1407, having married Joan, sister and heiress of John, Lord Devereux, and thus becoming also Baron Devereux. Walter, seventh baron, fought under Henry V. in the French Wars, and dying in 1432, left a daughter, Elizabeth, who conveyed the lands and baronies to Sir John Radcliffe, Knt., afterwards Baron FitzWalter. His son, Sir John, lost his head in 1495, in the matter of Perkin Warbeck, but his forfeited lands were restored to the son, whom Henry VIII. created Viscount FitzWalter in 1529, making him, five years later, Earl of Sussex and K.G. His descendant, Sir Edward, sixth viscount and earl, died s.p. in 1641, when the honours ended ; they were, however, renewed in 1669 to a collateral heir, Benjamin Mildmay, whose two sons succeeded, the last, Henry, being created, in 1730, Viscount Harwich and Earl FitzWilliam, who died in 1753, and the titles finally became extinct in the person of Sir Brook William Bridges, Baron FitzWalter, who died in 1875.

The first building was, of course, a Norman keep, but of this structure we know nothing. Its successor, as restored (temp. Elizabeth), is shown as a huge quadrangular block of buildings in five gable-ended divisions, with hexagonal corner towers, two storeys high ; beneath it, Pennant says, there was a bridge with stairs to the river.

In the reign of Henry VI. the place was transferred from the Dominicans to the Crown, when it was held by Humphrey, the Good Duke of Gloucester, who rebuilt the part of the house destroyed by fire in 1428. He, however, though uncle to the king, was attainted by the party of Queen Margaret, and is supposed to have been strangled in prison in 1447 (sec LEEDS CASTLE, KENT), when Baynard came again to the Crown.

It was here that Edward, Duke of York, took up his residence on coming to London after the second battle of St. Albans, and from hence, after receiving the deputation inviting him to the throne, he went in procession to assume the crown, March ;, 1461. Here, too, dwelt his brother Richard, Duke of Gloucester, at the time of his usurpation of the kingdom; his successor, Henry VII., dwelt at Baynard’s Castle for three or four years, and Henry VIII. entertained here, with great pomp, Philip of Austria, King of Castile, afterwards conferring the property on William Herbert, Earl of Pembroke, who married Anne, the sister of Queen Katherine Par. In this house the succession of Mary to the Crown in place of Lady Jane Grey, was determined on by the opponents of Northumberland. Then, in the reign of Elizabeth, it was occupied by Sir John Fortescue, the keeper of her wardrobe, after which the Earl of Shrewsbury became its owner, having obtained the property by marriage. The Great Fire of 1666 put an end to Baynard’s Castle, and not a vestige now remains of it. It stood upon the bank of the river, immediately below St. Paul’s Cathedral. (Castles Of England, Sir James D. Mackenzie, 1896)