With a history stretching back over 16 centuries, Pevensey Castle chronicles more graphically than any other fortress the story of Britain’s south coast defences.

Beginning in the 4th century as one of the last and strongest of the Roman ‘Saxon Shore’ forts – two-thirds of whose towered walls still stand – it was the landing place of William the Conqueror’s army in 1066.

During the century after the Conquest a full-scale Norman castle, with a great square keep and a powerful gatehouse, was built within one corner of the fort. In the 1250s the towered bailey wall was constructed, and soon put to the test during the great siege of 1264. Later still the castle was strengthened to face the threat of the Spanish Armada in 1588. This was not Pevensey’s last military service: during World War II, pillboxes and machine gun posts were cunningly camouflaged among its ancient walls.

An exhibition with artefacts found on site and an audio tour tell the story of the castle. 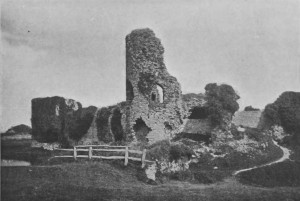 The Civitas Anderida of the Romans, occupies the site of a Roman camp of that name, the shape of which differed from the usual trace of a parallelogram, inasmuch as these walls form an oval, with a periphery of half a mile, adapted to the configuration of the point of the coast chosen for the settlement. Pevensey has been determined to be the spot where the landing of Julius Caesar took place, at which time the sea washed the foot of the low cliff where he formed his camp, and which afforded, on the E. side, a convenient haven for his ships. On the exodus of the Roman legions in the fifth century, their comfortable and safe quarters were appropriated by the British tribes, who formed a colony there, for in A.D. 477 the South Saxons, under Ella, attacked Anderida and massacred all they found there.

Thither, in 1066, came Duke William of Nortnandy, crossing from St. Valery with his huge flotilla of 907 great ships, besides smaller craft, which he had gradually built and collected in the harbour then existing at the mouth of the small river Dives, between Trouwille and Caen on the Normandy coast. After a long delay here, waiting for a change of adverse winds, he sailed along the coast of France to St. Valery, from which haven he crossed over direct to Pevensey. On stepping ashore, the chroniclers relate how William stumbled and fell, but put aside the omen by saying, “Thus I take possession of the land with both my hands.” 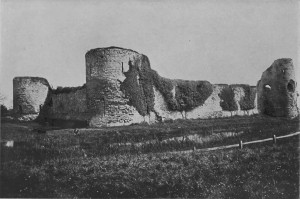 The level of the land has risen since that time, as it has at Dives, where the harbour no longer remains, and the sea has receded, so that where existed tidal waters and muddy flats then are marsh lands and fertile pastures now.

In the Bayeux tapestry is depicted the landing of the Norman cavalry and their march, headed by the duke, round the inland coast, to Hastings, a distance of about twenty miles. To protect the shipping left in this haven, there was erected, probably within the Roman camp, one of the three wooden blockhouses brought from Normandy, the rest of the fleet proceding to the harbour at Hastings.

A large proportion of the ancient encircling wall of the Romans still exists, as perfect as in the days of Constantine, being built of flint rubble, upon a foundation of piles, with a thickness of 4 yards, and a height of from 25 to 30 feet on the outside, enclosing an area of 81 acres. At intervals apart are fifteen massive flanking towers, two of which at the W. end defended the entrance, and some of these retain their Norman superstructure. 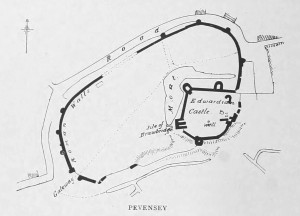 The Conqueror bestowed the Rape of Pevensey upon his half-brother Robert, Earl of Mortain, or Moreton, whom he further enriched with 558 manors in various counties, and 280 in Cornwall, together with the dignity of the earldom of Cornwall (See LAUNCESTON, &c.) ; it is probable that this Earl Robert repaired and added to the then existing fortifications, and also erected a Norman castle on the eminence at the E. end of the enclosure, where are now the magnificent ruins of the later Edwardian castle, which forms, as it were, the keep or stronghold of the exterior fortification. This earl was succeeded by his son William, who espoused the cause of Duke Robert against his younger brother, the Red King, and whose property was consequently confiscated after the siege in 1088.

Pevensey in these early days was of much importance in regard to communications with Normandy, and it was held successfully by Bishop Odo of Bayeux, another half-brother of William I., for six weeks against Rufus, in 1088, Odo having thrown himself into this fortress in the expectation of receiving here his nephew, Duke Robert, and a strong reinforcement from Normandy. He was obliged to surrender, and was alloyed to depart on the promise of obtaining the cession of his castle of Rochester to the Red King, a promise which he at once broke by holding that Kentish stronghold against the King, which was, however, taken after a siege, when the perjured bishop was banished the realm. Soon after when Duke Robert did arrive with a Norman force, he was beaten off in an attempt to land at Pevensey.

In the reign of Henry I. Pevensey was conferred on Count Gilbert d’Aquila, whose son lost it in 1127 by rebellion against the same King. From this family the title of the Honour of the Eagle was applied to these lands. During the desperate civil war between the Empress Maud and her cousin Stephen, the castle was besieged by that King in person, when it was defended by Gilbert, Earl of Clare, and was reduced only by famine; the young King Henry II. afterwards restored the place to the Aquila family. In 1235 Henry III. granted Pevensey to the great Earl Marshal, Gilbert, Earl of Pembroke, but it was afterwards resumed by the Crown and given in 1241 to the Queen’s uncle, Peter of Savoy. Hither, in 1265, after their defeat at Lewes, fled many of the Royalist fugitives that very night, embarking there for France to convey the news of the disaster to Queen Eleanor. Soon afterwards the castle was besieged by Simon de Montfort, junior, but on the escape of Prince Edward from Hereford (q.v.) the siege was raised after it had lasted nearly three months.

Pevensey was granted to Prince Edward in 1269, and it remained in the hands of the Crown until the fourteenth century ; then it was found to be in a ruinous condition, and having received repairs in 1309, was afterwards settled by Edward III. on his fourth son, John of Gaunt, who appointed the family of Pelham to be constables of the fortress.

In 1399, on the rising against Richard II., Sir John Pelhain, a staunch adherent of Bolingbroke, was custodian, but, being absent when this castle was attacked by the King’s forces, his wife, Lady Jane Pelham, conducted the defence with such determination and gallantry that the assailants were forced to retire. An interesting letter from her to her husband at the time is extant, showing her difficulties and distress.

The fortress had fallen into a bad state of decay at the time of the alarm regarding the Spanish Armada, when it was decided to demolish the castle ; but this was not acted on, and there is a gun, still lying in the outer ward, on which are the letters E. R., with a Tudor rose and crown, which was sent there at this time (1587).

The Crown held Pevensey until William III. bestowed it on the Benlincks, who, in 1730, sold it to Spenser Compton, Earl of Wilmington, from which family it passed, in 1782, by the marriage of his granddaughter, to Lord George Cavendish, and it remains in the possession of the Duke of Devonshire.

On entering the great Roman fortification, or castrum, either at the Westham end on the W., or at the small village of Pevensey at the E., the most remarkable feature is the great Edwardian castle, which occupies the site of the Norman one on the elevated mound in the S.E. corner, and extends around it, of which original castle little is known. This inner castle is supposed to have been erected at the close of the thirteenth century, or early in the succeeding one, the towers being ascribed to Edward II. (cir. 1309). The walls of it, forming a sort of pentagon, enclose an area of about 1½ acres, and were protected by a broad moat externally, which partly exists now. Each of the angles is formed with a large drum tower, three storeys high, with a lofty, massive curtain-wall between them ; the entrance gateway faces the W., and was flanked by two semi-circular fronted towers, of which only that on the N. side remains. The vaulted entrance passage, with its meurtriere opening above, and portcullis groove, is tolerably perfect, and was 35 feet long ; the masonry of the drawbridge in front remains. The angle towers are about 30 feet in diameter, rising from the moat ; they have a dark basement, once vaulted, and two rooms above, formed by timber floors. Against the curtain on the N. seems to have been a hall, and of late years excavations have shown here the site of the Norman chapel, of which the font is preserved. The two extremities of this medieval castle were worked into the Roman enceinte wall, which in this way formed the E. wall of the inner stronghold, and served to support the mound, thrown up doubtless in earlier times, and upon which was built the keep tower of the later castle. This feature has, however, perished, together with much of the buildings near it, of which there remain large fragments on the slope, shattered evidently by gunpowder. There is a postern here carried through the Roman wall. The castle well has been found at the foot of the mound.

Pevensey after the thirteenth century was chiefly employed as a State prison ; and among notable prisoners confined here was Edward, Duke of York, cousin-german to King Henry IV. He had joined in a plot to release from their captivity the two young Mortimer boys, who, as next heirs to the Crown, Henry guarded with much vigilance in Windsor Castle. The escaped prisoners were overtaken and brought back, and York was sent to Pevensey and confined there for several months. This was in 1405, at which time much of the inner castle was in ruins, the haven was choked with sand and mud, and the whole of the flats as far as Beachiff (Beachy Head) was constantly under water (Wylie).

In 1414 the castle received the youthful King James I. of Scotland, whom Henry had treacherously seized when on his way in a ship to France, and who was kept in captivity for eighteen years, partly at Windsor and partly here. After the death of Henry IV. his second Queen, Joan of Navarre, was, in 1419, sent a prisoner here on the charge of practising witchcraft against the life of her stepson Henry V.; she was only released at the death of the King after nine years close confinement.

There was a constable of Pevensey as late as 1553, and a survey of the castle was held at the end of that century. In 1650 the commission on castles sold the materials of it for £40, but demolition did not follow this act, for the chief destruction has been wrought during the last century, when the ruins were used as a quarry, until the last fifty years or so, since which time they have been carefully tended and preserved. (Castles Of England, Sir James D. Mackenzie, 1896)