Castle and Collegiate Church. Castle built circa 1170, ruined by 1399. The church was founded circa 1090, dissolved in 1547. Foundations of church, North and East curtain walls and East gate of the castle are visible. Probably built on an Iron Age enclosure. There is documentary evidence that a collegiate foundation existed in Hastings in the reign of Edward the Confessor, but it is not documented as so in the Domesday Survey. 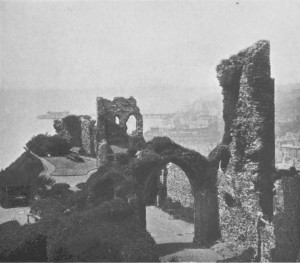 Hastings Castle stands on the summit of a lofty and precipitous ridge of the Wealden formation, which divides now the more modern town from the older one. Below it, and towards the W., once existed the small harbor which constituted Hastings the chief member of the Cinque Ports. Hither at once repaired the greater part of Duke Williams fleet, after the landing of the cavalry at Pevensey, and, upon the commanding plateau on the cliff above, the Norman headquarters were established and maintained for two weeks, until the army set forward on its march to meet the English at Senlac. During this time, a cruel harrying of this district was carried on for the double purpose of maintaining the troops and of drawing down the Saxon attack.

It is probable that some early fortifications already existed upon these heights, having a mound and a ditch, and that these were fixed on for the raising of one of the wooden castles brought from Normandy, as we see in the Bayeux tapestry. But the date of the erection of the stone castle here is uncertain, and, though this is said to have been the scene of the first tournament held in England, early in the reign of William I., at which his daughter Adela presided, it is certain that no very early Norman architecture is to be seen here.

The Conqueror gave the manor, castlery, and the whole Rape of Hastings to his kinsman, Robert, Count of Eu, whose descendants retained possession till about the year 1250 ; he, with his son, carried out some of the masonry of the enclosing walls which we see, so that, in the year 1088, a stronghold existed, which was occupied in force by the Red King for his purposed invasion of Normandy. But the Counts of Eu lived at their fine Chateau d’Eu, near Dieppe, and appear to have neglected their castle at Hastings, which, by the year 1200, had fallen into decay. Henry, fifth Earl, left an only daughter, Alice, who brought the lands and the title to Ralph de Essoudun, whose son, choosing to remain a subject of France, had his possessions escheated by Henry III. to the Crown. In 1265 Simon de Montfort, junior, preferred to retreat for protection, after the slaughter of his father at Evesham, rather to the walls of Winchelsea than to the insecure shelter of Hastings. In 5 Edward III. repairs were given by the town to the walls, which had been devastated by encroachments of the sea, causing land-slips of the cliff, from which the castle seems to have suffered at various times. Edward Ill. granted Hastings to his fourth son, John of Gaunt, in 1392, but in the succeeding reign the castle was in a ruinous state, nor does it seem to have ever been repaired. The French landed here in the reign of Richard II., and destroyed part of the town, the castle being of no use as a defence. 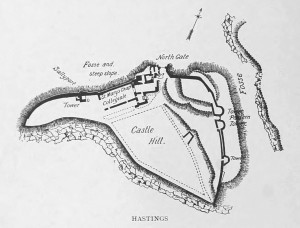 Henry IV. granted the Honour and Castle of Hastings to Neville, Earl of Westmorland, with reversion to Sir John Pelham (see PEVENSEY), who, in1412, transferred it to Sir Thomas Hoo, created Baron Hastings, who died s.p. male in 1453. In 1591 his descendant, Henry, Earl of Huntingdon, sold it to Sir Thomas Pelham, with whose representative, the Earl of Chichester, the property still remains.

There was an outer ward to the castle on the E. side of the great ditch which divides the ridge, and is cut in the live rock for 400 feet in length, and 60 feet in breadth. No masonry exists here, and perhaps this ward was defended only by a palisade. (Clark.) Across this fosse, over which access must have been obtained by a bridge to the gateway on the E., lies the inner ward, which constitutes the castle. It is formed by a curtain wall running from the point of the spur along the N. face to the edge of the ditch, along which it turns at right angles, following it to the edge of the precipice on the S. face, where the cliff formed an all-sufficient defence.

At the turning angle at the fosse the wall is carried through the artificial mound before spoken of, near which is the entrance gateway with two circular-headed towers flanking the entrance, which has a square portcullis groove. Between this point and the edge of the cliff is another similar mural tower.

The present entrance is a short distance from the above angle at the mound along the N. front, protected by a late tower with thin walls, connected with an older building, close to which is a rectangular Norman tower with three storeys, and containing a well-staircase which communicated with the adjoining chapel. This chapel of St. Mary had a collegiate foundation, its nave was 64 feet long by 30 feet wide, and was built against the N. curtain wall. The high-pointed arch of the chancel remains in a perfect state, and the whole seems to be almost Early English style. Beyond this is another square tower with traces of a postern. There was never any keep, nor can anything be traced of either hall, or kitchen, or lodgings within the area of 1 acres. (Castles Of England, Sir James D. Mackenzie, 1896)