Amberley Castle is now a hotel. 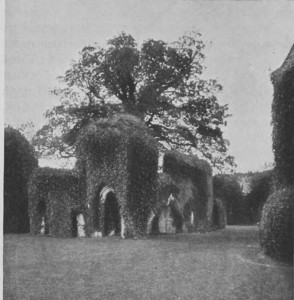 Amberley is a castellated and defensible bishop’s palace of the fourteenth century. It was necessary for bishops and abbots and priors to protect their wealth and their dwellings, and consequently frequent licences “to crenellate,” that is to fortify with battlements (crenelles), appear in the Rolls as granted to Churchmen during the reigns from Henry III. to Edward IV. The abbot in his dwelling at the head of his retainers was in the same position as a baron, and required equally to safeguard his property in hazardous times and situations. Amberley, which lies five miles north from Arundel, was built by William Rede, Bishop of Chichester, the first mathematician of his age ; the licence is dated 1 Richard II., and the palace was begun in 1379 and finished ten years later. A building seems to have existed there in Saxon times, and to have then been the property of the Church, and an episcopal residence. In 147 additional defences were added, and a forest or park of 2000 acres was enclosed.

A considerable portion of the old structure and of its defences still exists, situated on a piece of low-lying rock overlooking the marshy lands flooded at times by the river Arun. It was in the form of a parallelogram ; the N. E. and W. walls being nearly entire, but that on the S. has been destroyed. It was surrounded by a moat, and the bridge across this and the gatehouse are standing. The latter contains the main entrance between two segmental towers—similar to the gate at Carisbrook Castle and at Lewes—admitting into a large court or ballium surrounded by the outer walls, with square towers at the angles. In this enclosure stand the remains of the various buildings and lodgings, one of the chambers being called the Queen’s Room — a very fine apartment, on the walls of which are some paintings executed by an Italian artist in Bishop Sherburne’s time (1308-36). After that bishop’s death the place appears to have been leased to various landowners and others, until in 1687 a lease was purchased by Sir John Briscoe, after whom it passed in lease to other families. In 1872 the property was bought by Lord Zouche, the present owner.

Charles II. in his wanderings among the Sussex hills when escaping to the coast after the battle of Worcester, was lodged for a night in this palatial fortress, and his room still bears his name. It is said that Amberley was plundered and dismantled by Waller’s troops during the Civil War after the taking of Arundel, but the story is doubted. (Castles Of England, Sir James D. Mackenzie, 1896)