Privately owned and not open to the public. The castle is known as the site where the plot was hatched to assassinate Thomas Becket (1118-1170). More recently, it became the home of the art historian Lord Clark of Saltwood (1903-1983), then his son Alan Clark (1928-1999), a minister in Margaret Thatcher’s government, and the foremost political diarist of his generation. 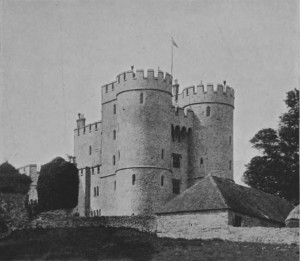 Between the ancient city of Canterbury and the site of the Roman port of Lemanis, which was close to Hythe, runs in an absolutely straight line for fifteen miles, due N. and S., the old Roman Stone Street, termed by Stukeley “a solid rock of stone,” and still the main highway. A mile from its termination, and N.W. of the town of Hythe, stand the remains of a strong castle picturesquely situated on the side of a pleasant little valley opening down to the sea. Round its ivy-covered walls circles a very broad and deep moat, whose waters are supplied by a little brook that flows through the valley. A Roman origin has been given to this fortress, but the citadel and camp of that warlike nation was placed at Lymne, opposite, on the declivity of the hill which overhung the port, and is now called Stutfall Castle, which was an enclosure of twelve acres, and which, though greatly injured by land¬slips, is well worthy of a visit. The original castle at Saltwood was Norman, and one of the towers of the outer wall is certainly of that work, though the greater part is much later, and it seems likely that Hugo de Montfort was its founder. As frequently occurs, this castle does not appear in the Domesday Survey, the office of which was to record the lands only, but this Norman certainly possessed the manor at the Survey date, 1086. Hasted states that it was rebuilt by Henry de Essex, Baron of Ralegh, and standard-bearer to Henry II. It is said that the lands were Church property in Saxon and Danish times, and when, according to Matthew Paris, Henry de Essex was defeated in a trial by duel for cowardice before the Welsh, he was allowed to live, but became a monk in Reading Abbey, his possessions being escheated to the Crown. Archbishop Becket then claimed them on behalf of his See, but they were only restored by John in his first year, after which time they were granted to various knights who held under the Church, with the King in capite. This brings us to the most interesting occurrence which is known in connection with Saltwood, namely the murder of Becket.

When Henry’s demoniacal outburst of fury against Becket occurred at the Castle of Bur, near Bayeux in Normandy, in 1170, it was taken by four of his cubicularii, or gentlemen of the bed-chamber, as a point of honour “to rid him of this low-born priest,” and they actually started the same night for England to work his will. They were Reginald Fitzurse, Hugh de Moreville, William de Tracy, and Richard le Bret, all, except Moreville, men of Somerset, and proceeding by different roads to the French coast they crossed the Channel on the following clay; two of them landed near Dover, and the other two at Winchelsea, and all four arrived at the same hour at the fortress of Saltwood, which was occupied by a great enemy of Becket, Randulph de Broc, who welcomed them and their mission, he having three days before been excommunicated by the Archbishop. “In the darkness of the night “—(following Dean Stanley’s compilation)—” the long winter night of the 28th of December—it was believed that, with candles extinguished, and not even seeing each other’s faces, the scheme was concerted” in Saltwood Castle. Early next morning, levying some troopers in the King’s name, the knights rode off along the Stone Street to .Canterbury, and took up their quarters with Clarembald, the Abbot of St. Augustine’s Abbey. In the afternoon they rode to the great gateway of the Archbishop’s palace, and leaving their weapons outside, with gowns over their mail, they sought Becket in his private apartment, where he sat with his monks after the 3 o’clock banquet. The four knights confronted him here, and roughly made demands in the King’s name, which he put aside, and a violent altercation took place ; whereon the knights retired with threats, and passing through the palace shouting out ” To arms,” proceeded to take off their gowns and to arm themselves. Meantime the Archbishop, though fully aware of his peril, but refusing to secrete himself, had been hurried by the frightened monks into the cathedral, and he was ascending the stairs, which then, as now, led from the N. transept to the choir, in order to join in the vespers that had commenced, when the knights rushed into the transept, still known by its ancient name of “The Martyrdom.” It was then about 5 o’clock on the 29th of December, and night was gathering in ; the sacred building was lighted only by a few lamps in the shrines, and in the gloom the knights could but just discern a few figures mounting the steps. “Stay!” shouted one of them. Another : ” Where is Thomas Becket, traitor to the King?” :and “Where is the Archbishop?” To which the reply came, “Reginald, here I am, no traitor, but the Archbishop and Priest of God ; what do you want ?” and Becket descended to the transept and confronted his assailants. Here they closed round him, crying, “Absolve the bishops whom you have excommunicated;” when, turning on Fitzurse, he demanded why he came armed into the church. Fitzurse pressed an axe against his breast and said “You shall die—I will tear out your heart.” Then a scuffle ensued in which Becket hurled Tracy to the ground, and called Fitzurse by an opprobrious name, whereon the latter struck at him, only dashing off the cap, when Tracy, rising, dealt a heavy blow which was intercepted by a monk, whose arm fell broken, while the sword, grazing the head of Becket, fell on his shoulder. Two blows followed : the Archbishop fell on his face, and le Bret struck him as he lay a tremendous sword-cut, which severed the top of the skull, the sword being shivered on the marble pavement—a veritable Gabbatha—whilst one of the followers scattered the dead prelate’s brain with his sword. Then the party of murderers, leaving their victim, rushed away to plunder his palace, after which, taking horses from his stable, they rode away through the night back to Saltwood Castle, with no very enviable feelings, one would suppose, about their cowardly and sacrilegious deed. Next day they rode forty miles to South Malling, one of the Archbishop’s manors, near Lewes in Sussex, where, entering the house, the tradition goes, the knights flung off their arms on a large dining table in the hall ; “suddenly the table started back, and threw its burden on the ground,” refusing to bear it ; and this occurred twice—the earliest instance, Dean Stanley remarks, of a “rapping, leaping, and turning table.” From this place they went through the land to Yorkshire, and took shelter at Knaresborough Castle, a Royal fortress then in the possession of one of them, Hugh de Dioreville, where they remained for a year.

After King John’s restitution of the castle and manor to the See, it so remained until exchanged by Cranmer, in 31 Henry VIII., for other lands with the Crown, the castle being occasionally used as a palace by the archbishops.

The area enclosed by the outer walls is elliptical, the large outer court being until of late years, converted into a farmyard, which may have been always its purpose. (Parker.) Across the moat is the splendid gatehouse, a complete house in itself, of which arrangement it is a very fair example : it was chiefly built (temp. Richard II.) by Archbishop Courtenay, who held the See from 1381, and whose arms it bears in front ; he expended large sums upon the place.

Between the two round towers flanking the gateway the machecoulis are quite perfect, and under the vaulting are the portcullis groove and the gate. The archway, which was built up, has overhead the principal apartment, .with smaller chambers leading from it in the turrets, each of which contains a staircase and a garderobe, all cleverly arranged for economy of space. The chambers all have fireplaces with flat Perpendicular arches. There was also an inner port¬cullis, and the floor of the chamber above is arranged with holes for pouring burning material upon assailants beneath the vault. The high embattled walls of the inner court are more perfect than those of the outer one, and here existed the lodgings, which remained for ages in a ruined slate, the walls of the hall with three window arches on each side surviving. The whole is fourteenth century work. (Parker.) Stukeley, writing in 1722, says : “The floor of the ruinous chappel is strongly vaulted ; in the middl of the court is a lug square well, which is the only thing I saw that look’d like roman.”

In the first Ed. VI., Saltwood was granted to John Dudley, Earl of Warwick, and in the first year of Diary to Edward Fynes, Lord Clinton, in whose time the park was cultivated. Since then various families have owned the place, which was purchased some yews ago by Mr. William Deedes of Smutting from Sir Brook Bridges, Bart., of Goodneston. It was at one time the residence of the Lord Wardens of the Cinque Ports, but the earthquakes of 1580, 1692, and 1755 reduced the fabric to a ruinous condition, and thus it continued until 1882 when, by a very large expenditure, and with much care and judgment, the old castle was completely restored, all the ancient work being retained and repaired wherever possible. The grand double gatehouse was included in the restoration, and a fine new block of buildings was erected behind it, in good keeping, the whole forming an excellent country residence, and giving an instance of a castle, upwards of 500 years old, successfully adapted to modern requirements. It is now the property of Mrs. Deedes. (Castles Of England, Sir James D. Mackenzie, 1896)