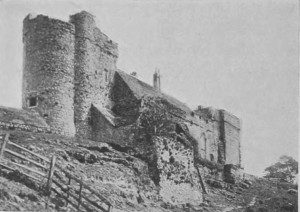 This is the name given to the remains of some old buildings occupying the Roman castrum of Lemanis, or Lymne, that protected the harbour here, now meadow ground, but which at the time of Roman ascendancy reached as far as Hythe, whence the straight road, called Stone Street, leads, without a bend, to Canterbury. Landslips have wrecked the ancient walls, which also were taken by Archbishop Lanfranc for building the church. There exists a castellated house erected (temp. Henry V.) upon part of the residence of the Archbishops of Canterbury, been a Norman watch-tower built within the castrum. (Castles Of England, Sir James D. Mackenzie, 1896)