Historic Hever Castle and Gardens with its enchanting double-moated castle and 125 acres of spectacular gardens to explore, offers the visitor plenty to discover and enjoy.

Hever Castle is an important historic castle on the English landscape, once the family home of one of England’s most famous Queens – Anne Boleyn, the intriguing second wife of Henry VIII and mother of Elizabeth I. 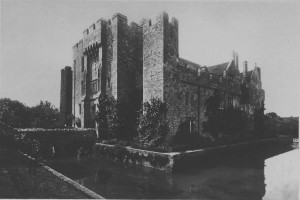 The little river Eden flows through the S.W. corner of Kent to its border at Edenbridge, and from it the moats of Hever Castle are filled. This fortress stands a quarter of a mile N. of the village, and a mile from the railway station, and is a good specimen of a fifteenth century house, altered and adapted in the Elizabethan period ; its exterior is very perfect, and it is still inhabited as a farmhouse.

A very early building was here, probably on the same site, as there is a licence granted 55 Henry III. (1272), to “Stephanus de Penecestr. kernellare domum suam, of Hevre, Kane.;” but nothing is known of this building, and the existing castle is said to be the work of Sir Willisun de Hewer (temp. Edward III.), though there is no licence recorded in that reign applicable to Hever.

Sir Williams daughter, as a co-heiress, brought the place to her husband, Reginald, Lord Cobham of Sterborough, from whom it was purchased (37 Henry V1.) by Sir Geoffrey Boleyn, a wealthy mercer and Lord Mayor of London, the great grandfather of Anne Boleyn, the mother of Queen Elizabeth. He practically built the existing fabric, which was completed by his grandson, Sir Thomas, the father of Queen Anne Boleyn.

The family of Bullen, or Boleyn, originally French, settled in Norfolk soon after the Conquest, and in this county Sir Geoffrey bought the manor of Blickling, from Sir John FastoIf. His son, Sir William, rose from the counting-house to be a successful courtier, and much must his pride have been gratified when his son, Sir Thomas, married the Lady Elizabeth Howard, daughter of Thomas, Duke of Norfolk. Their daughter Anne was born about the year 15o1, and was educated, if not altogether brought up, at Hever under a French governess before she went to France in the train of the Princess Mary, the King’s sister. Returning to England in 1522, she became a maid of honour to Queen Catherine of Arragon in 1527. Shortly afterwards her father, who had been made Viscount Rochford in 1525, Wati advanced to the Earldom of Wiltshire and Ormond. In June 1532, while Henry’s divorce from Catherine was proceeding, she was styled Dame Anne Rochford, and three months after was created Marchioness of Pembroke. On January 25, 1533, Anne was privately married to Henry, and on June 1 was crowned Queen of England, amid much public rejoicing. It was a short reign, for on May 2, 1535, Anne was taken a prisoner to the Tower, to the same queen’s lodgings which she had occupied two years before at her coronation.

Henry’s character, and the fact of his being already absorbed with his wife’s maid, Jane Seymour, must ever cloud with doubt the truth of his case against Anne, but it is difficult to believe in her entire innocence in view of the recorded facts. Brought to trial in the Tower on May 15, and judged to be burnt or beheaded “on the green within the lower;’ the Calais headsman was brought over, and on May 19 she suffered. The common story is that she refused to have her eyes bandaged, and, watching the executioner, almost unmanned him; at last, managing to get the Queen’s attention diverted for a moment, and taking off his shoes, he was able to approach her unperceived and to strike with his sword the fatal blow. No coffin had been prepared, and the poor Queen’s body was placed in an old arrow chest and buried in the chancel of St. Peter’s ad Vincula.

Here the remains were found when the church was refitted in 1876, heaped together in a small space : they were then carefully gathered, placed in a leaden case covered with oak, and reburied. Miss Strickland believes it certain that Anne was born at Blickling in Norfolk, and gives her age at her death as thirty-five. At Salle Church in Norfolk is shown a plain black marble slab, which is there believed to cover the interment of the body, removed from the Tower secretly by night, but we may trust the late Tower officials to have proof otherwise.

It was at Hever that Henry first saw Anne, in the garden, and entered into conversation with her, which he related to Wolsey on his return to Westminster, saying that he had “been conversing with a young lady, who had the wit of an angel, and was worthy of a crown.”

After the attainder of Anne’s brother, Lord Rochford, who was beheaded two days before her on Tower Hill, the castle of Hever and other estates were escheated to the Crown, and this castle was settled on Anne of Cleves for her life. At her death in 1557, it was sold by commissioners to Sir Edward Waldegrave, chamberlain to Queen Mary, and front his family the manor and castle passed to Sir William Humfreys, a Lord Mayor of London in 1716 ; afterwards it came to Sir T. Waldo, whose descendant, Mr. E. W. Meade Waldo, is the present owner.

Hever is described by the Messrs. Parker as a small quadrangular castellated house of the fifteenth century. One line of the double moat almost washes the foot of the walls. The grand feature is the gatehouse, through which the amorous king used to ride on his love-making missions; it is a superb structure, quite disproportioned to the house, with its battlements and machicoulis, and its line gateway, in which are three portcullis grooves. Inside, the buildings remain, tolerably perfect, as they were left after the re-modelling (temp. Elizabeth), with high roofs and gables. A poorish hall remains, and rooms are shown, said to have been occupied by Anne Boleyn. Beyond the moat is a range of very curious wooden stables, of date not later than the fifteenth century. (Parker.)

In the diary of Sir Thomas More’s daughter Margaret, a glimpse of Henry VIII. is afforded, as he was seen in 1524, in his thirty-fourth year. She says her mother “calls him a fine man; he is indeed big enough, and like to become too big, with long slits of eyes that gaze freelie on all, as who should say : ` Who dare let or hinder us.’ His brow betokens sense and frankness, his eyebrows are supercilious, and his cheeks puffy; a rolling straggling gait, and abrupt speech.” The bulk of his love-letters are in the Vatican library.