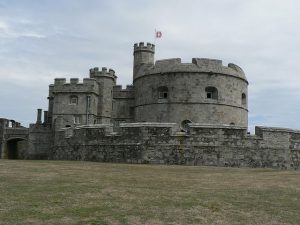 © Copyright Rich Tea and licensed for reuse under this Creative Commons Licence.

Discover the wartime secrets of Cornwall’s greatest fortress. Pendennis Castle was built by King Henry VIII to defend against possible attack by Spain and France. Throughout its 450-year history, Pendennis Castle has faced new enemies, right up to the Second World War. See a Tudor gun deck in action, and experience the sights and sounds of battle in the interactive exhibition at the Royal Artillery Barracks. Explore the cells of the WWI guard house, and relive the drama of an enemy attack on the WWII observation post. Then descend through secret tunnels to the big guns of Half Moon Battery.