A visit to Colchester Castle Museum takes you through 2000 years of some of the most important events in British history. Once capital of Roman Britain, Colchester has experienced devastation by Boudica (Boadicea), invasion by the Normans and siege during the English Civil War.

Since the 16th century, the Castle has been a ruin, a library and a gaol for witches. Today it is an award winning museum featuring many hands-on displays showing Colchester’s history from the Stone Age to the Civil War. 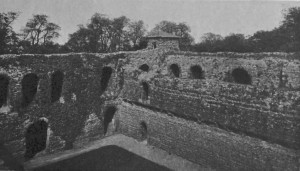 In the year 44 A.D. the Emperor Claudius, having first sent forward a large expeditionary force for the third invasion of Britain, followed the successes which his generals Plautius and Vespasian had obtained over Caractacus and his Britons, by himself coming with additional forces .and carrying the war into the eastern part of the country, where he finally defeated the enemy, and took possession of their city Camalodunum. Here “he founded a colony of old soldiers and others, as he had previously done among the Germans at Koeln and Trier, causing also a temple to be built in the most commanding position of the colony, dedicated with divine honours to himself. The tyrannic rule of their Roman masters was, however, more than could be endured by the Britons, anti the insurrection under Boadicea swept over Colonia and destroyed it root and branch.We hear no more of the place till, in Saxon times, we find it resettled under the name of Colonia, or Colne-ceaster ; and afterwards, when East Anglia fell under the dominion of the Danes, it became one of the chief seats of Danish power.

Then, when this power was waning, in the tenth century, the English of Kent, Surrey, and Essex coming to Colchester, stormed the place, and in Saxon style massacred every living person in it. Soon after, in 921, King Edward the Elder, son of Alfred, came thither and repaired the old walls, and re-established the Saxon burgh, but there is no record of any castle there, even of wood. The Roman walls, which still exist, constituted, no doubt, a sufficient stronghold ; the circuit of them, in an irregular parallelogram of 1000 yards’ length, enclosing an area of 108 acres, was formed of a wall of septaria stones and brick, 10 feet thick, backed by an earthen bank, and flanked by towers at intervals. This wall was defended on the N. and E. sides by a bend of the river Colne, at a place where a paved stone ford existed, and as the land on this bank dominated the adjacent country, an extended prospect was to be obtained from its ramparts. Colchester was a port of some importance, at no great distance from the sea, and at that time with sufficient depth of water in its river to float the heavier boats of the period.

When Duke William sailed for the conquest of England, he took with him the four sons of Hubert de Rie, a lordship near Bayeux, in Normandy, all of whom rose to eminence under his favour; one of them, Eudo, shared largely in the plunder of the English manors, receiving sixty-four of these, of which twenty-five were in Essex, and to him the Conqueror granted all his own rights in Colchester. Eudo had also obtained the office of Dapifer, or High Steward, of Normandy, and later was appointed to the same high office, that of Grand Seneschal, of England.

It was this Eudo Dapifer who is thought to have built the Norman castle we now see at Colchester, being ordered, perhaps, or expected, by William to erect one. It was an immense tower or keep, by far the largest of all Norman keeps in England, measuring 155 .feet by 113, whereas the White Tower of London is bud 116 by 96. It closely resembles in plan and arrangement the Towers of London and Rochester, and it is most probable that the cleric-architect of these (Gundulph, Bishop of Rochester) was consulted by Eudo for his castle of Colchester, as he was for Eudo’s monastery there of St. John. The date given for its erection is 1076-8, but there is no certainty about it. It stands somewhat towards the N.E. corner inside the Roman wall, and is built chiefly of Roman bricks and tiles from the ancient town with bands of stonework, and it is founded on the original gravel without any mound. The plan is the familiar one of the four projecting corner turrets or buttresses, with a chapel apse, and originally it perhaps had another storey, which would add much to its stateliness. There was, of course, the castle and an outer or nether bailey, but of these no vestiges can be seen.

The remains of the Roman wall on the E. N. and W. sides enclose an area known as the inner bailey. These ancient walls are reveted with an earthen slope on each side, that on the N. being 40 feet in height.

In Speed’s Magazine of 1610, the wall on the S. also is shown, but this was pulled down by one Robert Norfolk, and a row of houses erected on its site during the seventeenth century. The lower, or outer bailey, was on the N. side of the inner bailey, and was bounded by the N. wall of the town : its boundaries are still traceable.

Grand as was this castle, and important its position, although it endured several sieges and was never captured by assault, it has little or no military history in itself. When Eudo died, his castle, according to common Norman usage, reverted to the Crown, and Henry I. bestowed the keeping of it on Hamo St. Clare, who was succeeded by Hubert St. Clare, whose daughter and heiress brought it in marriage to William de Lanvalei, lord of Stanway, in whose family it remained for two generations further. King John came there the year before Magna Charta, when, mistrusting the constable Lanvalei, he appointed one of his Flemings, one Harengoot, keeper of the castle, who obtained from London two 24-inch balistas and sit of 12-inch, with engineers capable of using them, for its defence, and strengthened the outworks of the castle. But soon after came the triumph of the barons at Runimede, and the consequent replacement of. Lanvalei in 1215, followed in a few months by the unaccountable paralysis of the barons’ power and spirit, and the renewal of civil war by their vindictive King. In November the barons, having obtained some troops from the French King, placed a part of them in Colchester, under the Earl of Winchester, whereupon John ordered its attack under Savaric de Mauleon, who had just taken Rochester Castle, and who had therefore to transport his siege train thence, so that it was late in January 1216 before the siege of Colchester was begun ; and in March, John himself appearing before the walls, the French garrison surrendered, entailing the cession of the fortress, and the Fleming was reinstated. He continued to hold it until the terms of a temporary truce restored its keeping to the power of the barons, and in 1216 it was occupied by the Dauphin and his Frenchmen. Shortly after came, happily, the end of John’s pernicious life. When Lanvalei died, his daughter became the ward of Hubert de Burgh, the faithful servant of the late King, and he married her to his son, who thus became constable ; but, on his attainder, the castle was handed over to Stephen de Segrave, under whom it became a prison for felons. The see-saw of alternate victory and defeat between Henry III. and his nobles caused three changes in the custodianship of Colchester, which was finally given by Henry to Thomas, brother to the Earl of Gloucester.

Thenceforth all military character ceases with the fortress, which became a county prison under the care of the sheriff, and although, during the civil war in the seventeenth century, the town of Colchester stood a close and severe siege by the Parliamentary forces under Fairfax, the castle itself took no part. Perhaps, however, the tragic end of this siege has some connection with the old fortress, inasmuch as the shooting in cold blood of the two gallant Royalist defenders of Colchester, Sir Charles Lucas and Sir George Lisle, by Fairfax, took place under its N. wall on August 27, 1648. In this year, the King being a captive, it was thought that a successful rising of the Royalists in different parts of the kingdom would enable him to obtain fairer terms from his enemies, and a force of 4000 was accordingly led by Goring into the eastern counties, and made their way to Colchester. They were closely followed by Fairfax, who arrived at Lexden Heath in the vicinity on June 13, with a force sufficiently large to completely invest the town, which, on a summons to surrender being con-temptuously refused, he proceeded to do by proper siege tactics, with lines and batteries. The Royalists made a gallant defence, but the place was not provisioned for a siege, and the King’s cause having failed in all other points, the leaders were forced by the famished townspeople to surrender to the Parliament on August 27, the senior officers submitting themselves without assurance of quarter.

That same day a council of war assembled to try Sir Charles Lucas and Sir George Lisle on a false charge of having broken their parole, and condemned them to be executed. Accordingly, at seven the same evening, they were brought out to a grassy spot under the castle near the wall, and in the presence of Ireton, Rainsborowe and Walley, were shot by three files of musketeers. Sir Charles Lucas, .who was a younger brother of Lord Lucas, and belonged to the town, was the first to suffer, and next his comrade. Evelyn, in his Diary, speaks of these men as “valiant and noble persons;” and of their death as a barbarous murder, for which, indeed, Fairfax, later on, wrote a sort of defence. For ages afterwards a bare spot of ground used to be pointed out under the castle as the scene of the execution, upon which, it was affirmed, the grass would not grow.

The most serious injury done to the castle, far greater than it sustained from any siege, was perpetrated in the last century by a certain John Wheeley; this man purchased the fabric of Robert Norfolk in 1683, and commenced to pull it down for the sake of the materials. Enormous damage was done at that time, and it is possible that the upper storey was removed. The property has passed through many hands, and is now owned by Mr J. Round, M.P. for Harwich. (Castles Of England, Sir James D. Mackenzie, 1896)