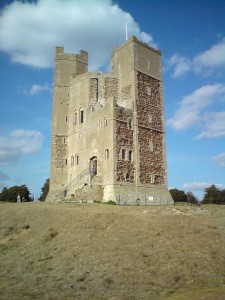 The unique polygonal towerkeep of Orford Castle stands beside the pretty town and former port which Henry II also developed here in the 1160s. His aim was to counterbalance the power of turbulent East Anglian barons like Hugh Bigod of Framlingham, and to guard the coast against foreign mercenaries called to their aid.

Recent archaeological work has provided a clearer understanding of how the castle worked, and a painting by Frank Gardiner shows how the keep and its vanished outer defences looked in their heyday. The upper hall now houses a display by the Orford Museum Trust, including local finds of Roman brooches, medieval seals and coins and some of the borough regalia. Graphic panels display maps, documents, pictures and photographs, illustrating Orford’s history down to the 20th century.

In the S.E. division of the county, seven miles S.W. of Aldborough, near the coast. The town is built on the W. side of a creek formed by the Ore and Alde rivers, and gives its name to the earldom of Orford, once held by the Walpole family. The castle, said to have formerly occupied the centre of the town, is now on its W. side, from the disappearance of a great part of the older buildings of the town, where, upon rising ground, stand the remains of its remarkable keep, which somewhat resembles that of Coningsborough, Yorks. The name of the founder is not known, nor the date of erection, but it may be of the time of Stephen or of Henry I., Caen stone being employed in the ashlar dressings ; and since the lands were given to Robert Malet, the follower of the Conqueror, it is possible that his son founded this castle. In 1215, the Bigods, Earls of Norfolk, had it in their custody, giving place soon after to the famous Hubert de Burgh, Earl of Kent. In 45 Henry III., Philip Marmion was governor, but after the battle of Lewes the victorious barons placed Hugh Despencer here. In the reigns of Edward I. and 11. the descendants of Peter de Valoines the Norman, held Orford and made it their chief seat, until, at the death of Robert de Valoines, Earl of Suffolk, early in the reign of Edward Ill., Robert de Ufford, who had married that noble’s daughter and co-heiress, Cecilia, had a grant for life of the town and castle. William de Ufford died seised of it 5 Richard II. Then his widow possessed the property for her dowry, and was succeeded by Robert, Lord Willoughby d’Eresby, who was the grandson of Robert de Ufford, son of Cecilia, the lady of Orford. The Willoughbys were here from 4 Henry V. until the time of Henry VIII., when the estate came to Sir Michael Stanhope, and descended with his other property to Pryce Devereux, afterwards Lord Hereford, whose executors sold it to the Earl of Hertford. The second Marquis of Hertford wished to pull down this ancient fabric for the sake of the materials, but fortunately it was saved by the Government in the interests of the shipping, to which the keep affords a useful mark at sea.

The Keep, or citadel, is of very peculiar construction, and may best be described as a hollow cylinder, 27 feet in diameter, supported or flanked by three equidistant square turrets on the W., N.E. and S.E. sides, boldly projecting from the central tower; the faces of this in the spaces between the turrets are moulded into the facets of a polygon, while its centre is circular. All the towers are crenellated, the outer ones overtopping the central tower, which is 90 feet in height. The walls are solid at the base and measure 20 feet through. The keep is encircled with two ditches which are concentric at 25 feet and 18 feet from the walls, and between these ran a circular wall of defence 40 feet high and heavily battlemented, of which a portion still remains. A square tower attached to the S.E. turret gave access by a flight of stairs to the first floor of the keep, and under this entrance are two cellars, or dungeons, unprovided with air or light openings. There were four storeys in the main building, hawing timber joists for their flooring, and a spiral staircase led up to the top ; two of the storeys are lighted with small windows, and the side turrets have five stages. Over the entrance was a small chapel. A stair in one of the turrets leads to the third stage, which has been roofed and floored ; this formed the chief apartment, and a kitchen was contained in one of the side turrets on the same level, furnished with a brick chimney. There was a garderobe to each floor, and small sleeping chambers were contrived in the walls. At the top of one of the turrets is an oven or furnace.

The first notice of this castle is in Camden, .who quotes from Randolphus de Coggeshall a legend of the capture of a merman in the nets of some fishermen there during the reign of Henry I., “when Barth de Glanville was warder of Orford Castle”. After being kept some time shut up in the castle and somewhat tamed, the creature is said to have escaped to the sea and disappeared. (Castles Of England, Sir James D. Mackenzie, 1896)