Visit Carisbrooke Castle and enjoy over 800 years of history! The Isle of Wight’s royal castle is remarkably complete, with battlements to march across, a keep to climb and the new Edwardian inspired Princess Beatrice Garden. 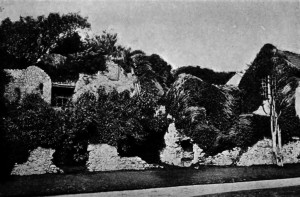 The Isle of Wight, like Kent, was peopled by Jutes, who, coming in under the wing of the actual conquerors, Cerdic and Cynric, exterminated the existing Romano-British inhabitants at the bloody battle of Wihtgaresbyrg (Saxon Chron.), a name which, omitting the primary syllable, became “Carisbrooke”. The later castle, whose site is actually that of the battlefield of 530, was conferred by the conquerors on their relative Wihtgar. But whereas the Jutes of Kent were the first, those of the Isle of Wight were the last among the English to embrace Christianity, and in the seventh century the fine proselytising zeal of the West Saxons led them to invade and annihilate with their murderous knives the heathen islanders, whose land they annexed to the Wessex diocese. 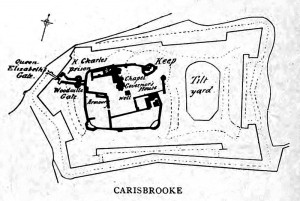 The island was already found to give the shortest passage between England and Normandy, and for this reason was used in Saxon times, as also by William the Conqueror on some of his journeys to and from Normandy. It was here that he arrested his half brother, Bishop Odo, as he was on his way. to Rome, and here he tarried on quitting England for his last journey to France. William granted the Isle of Wight to William FitzOsborne, Earl of Hereford, who, it is believed, reared the castle of Carisbrooke, in which Odo was arrested, as he likewise founded the priory adjoining. He had accompanied his leader from Normandy, and was one of his army marshals. Besides having the lordship of this isle, he was made constable of the newly built castles of York and Winchester, and justiciary for the King in the North. On the great mound of the Saxon burh at Wihtgaresbyrg he built a Norman keep, but as he was killed in France four years after coming to the isle, it is probable that the work he began was completed by his son, Roger de Bretteville, who was imprisoned for life by William for levying war against him, all his estates being forfeited to the Crown. 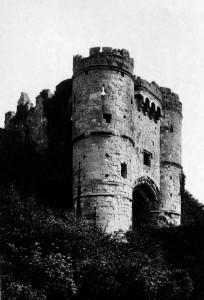 Henry I. next gave the lordship of the isle, with the castle and honour of Carisbrooke, to Richard de Redvers, whose son succeeding him (temp. Stephen), was made Earl of Devon; large additions were made by this family to the castle, which was held by the Redvers until that race ended in an heiress, Isabella de Fortibus, so called from her marriage with an Earl of Albemarle of that name. This lady livecl here (1262-1293) and built a large part of the castle, which, at her death, she bequeathed to King Edward I. Afterwards, in the fourteenth century, the castle was held by Piers Gaveston, William Montague, the chivalrous Earl of Salisbury, and by Edward, Earl of Rutland, son of Edmund of Langley, fifth son of Edward III., who inherited his father’s title of Duke of York, and fell at Agincourt, when, after his widow, Philippa’s, death, the castle and island fell to Humphrey, the Good Duke of Gloucester, in the reign of Henry VI. After him the lordship was enjoyed by several royal and other personages, and lastly by Anthony, Earl Rivers, and his brother, Sir Edward Woodville, who, together with a large force he had raised in the island, fell at the battle of St. Aubyn, in a foolish expedition against the king of France. Since that time Carisbrooke has always been held by the Crown. In Elizabeth’s reign, when preparations were made on the south coast to repel the Spanish Armada, very elaborate outworks were planned and executed at this castle, entirely surrounding it with fortifications of the then new type, escarp and ditch and ravelin and redan, which exist at the present time: but _they were never wanted, and only served usefully as a promenade for the royal victim, King Charles, in his imprisonment.

Charles having escaped from his durance with the army at Hampton Court (November 11, 1647), rode to Titchfield, the Earl of Southampton’s place, whence he might have sailed by Portsmouth Harbour to the Continent, as his intention was; but, by a mistake, Colonel Hammond, the Governor of the Isle of Wight, was brought to Titchfield, and he conducted the King to Carisbrooke, where he became again a prisoner. Here three attempts seem to have been made, chiefly by some gentlemen of the island, to give him freedom during the twelve months of his detention. On the first of these occasions it was arranged that Charles should pass through the window of his room, and let himself down to the ramparts, below which a guide with a horse was waiting, and a boat was ready to take him to a ship in the offing; but an iron bar in the window prevented his getting through, and so the King had to wave off his friends. The window in question is discernible from the outside of the King’s lodgings; it adjoins the only buttress of the wall, and is walled up. On another occasion, implements having been provided for him, Charles managed to saw through and remove the bar which impeded him, and all arrangements were made for his flight, bud a rascally officer, one Major Rolfe, was entrusted with the secret and betrayed it. So, when the King was about to make the attempt, he observed below more people than were expected, and wisely decided to remain where he was. It was said that Rolfe intended to have shot the King as he descended. After being there for a year, Charles was removed, with scant ceremony or respect, from Carisbrooke. At daybreak one morning a party of soldiers were sent, who, rousing him from bed, took him off to Hurst Castle, a fort on the mainland, standing at the extremity of the spit of land, near Lymington, which stretches across the Solent Strait to within a mile of the opposite island. Here the King was detained for a month, when he was taken to Windsor. To Carisbrooke were sent the two royal children, the year succeeding their father’s judicial murder, but in less than a month the Princess Elizabeth was found dead in her room, her face resting on the Bible given her by her father at their last interview. Prince Henry remained there nearly two years. An attack was made on the castle at the outbreak of the civil war by the mayor and people of Newport, in obedience to the instructions of the Parliament, in order to get rid of the King’s captain, the Earl of Portland, and his successor, Lord Pembroke; and the fortress was yielded on honourable terms. After the Restoration, the governor, Lord Cutts, made great and lamentable alterations in the old fabric, quite modernising a part of it; but at a recent date the Government have restored the work in a judicious manner, and brought to light some hidden and interesting features.

The Norman keep of Richard de Redvers stands on the ancient English mound at the N.E. angle of the inner ward, surrounded by its moat; it is an irregular polygon in shape, a shell keep 60 feet across, with walls of great strength and thickness, the access to which is by a long flight of stairs, the postern being protected by double gates and a portcullis. One room only remains, in which is a deep well, the others are destroyed, but there remains a small staircase to the top, whence a very fine view is obtained; at the foot was a sally-port defended by a bastion, which has disappeared. The entrance is on the W. by a fine machicolated gateway, flanked by two round embattled towers, through a high pointed archway with portcullis grooves; all this was built by Anthony, Lord Scales, who had the lordship in 1474, and whose arms are on the gatehouse, as they are on Middleton Tower near Lynn (q.v.), with the Rose of York. Inside are the older gates, with latticed ironwork, and on the right the ruins of the guardhouse, and the chapel of St. Nicholas, built in 1738 on the site of the ancient chapel. On the N. are the ruins of the buildings occupied by King Charles, a small room being shown as his bedroom. The governor’s quarters, barracks and other buildings are all of different periods. In the centre of the S. wall are remains of a mural tower, and there are the ruins of the Mountjoy, a Norman tower in the S.E. corner, the walls here being 18 feet thick: E. are two other towers. Anciently there must have been some outworks, as in the Domesday Survey the area of this castle is said to be one virgate, or 20 acres. (Castles Of England, Sir James D. Mackenzie, 1896)