Due to re-open in the summer of 2010, the Grand Pier is closed for the re-construction of a brand new state of the art pavilion.

Wednesday 3rd February saw the “Topping Out Ceremony” carried out on Weston super Mare’s Grand Pier. The re-building of the famous landmark, which was devastated by fire in July 2008, is now well on the way and scheduled to re-open this summer.

After tightening the last bolt to secure the roof onto the north east tower, Pier owner Kerry Michael addressed more than 100 people who attended the ceremony, he thanked the Main contractors John Sisk & Son Limited and all the workforce, particularly those who had worked through the recent poor weather conditions and he also said that despite currently being behind schedule, he was confident the works would finish on time.

The Grand Pier is scheduled to re-open in June following a £39 million re-building programme that includes state of the art rides sourced from all over the world. 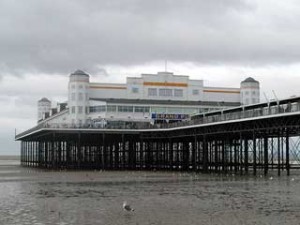 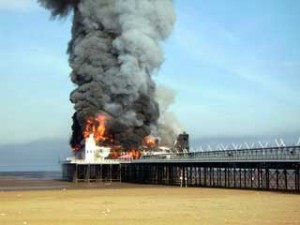