Berkeley Castle has been lived in by the same family for over 900 years. It is where history has been made. Where Edward II was murdered, where the Barons of the West gathered before Magna Carta and where Queen Elizabeth I hunted and played bowls.

The house, gardens and a butterfly house are open to the public .

Late 11th century castle rebuilt in the mid 12th century with 13th century and mid 14th century alterations. Excavations in 1938 have located much of the castle’s layout including walls and buildings. Castle keep, with curtain wall and inner bailey. 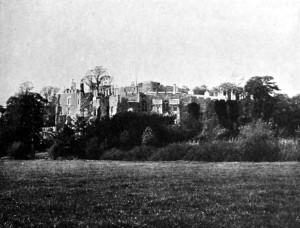 This magnificent fortress, one of the most interesting and romantic structures in the kingdom, is one of the very few ancient castles which have been continuously inhabited from early times. It preserves externally its grand mediaeval appearance, and if internally the requirements of modern life have necessitated modifications and alterations to fit it for a present-day dwelling, there remains still enough of the old fabric to satisfy even the exacting antiquary. The sombre gloom which clings and will ever attach to the name of Berkeley Castle, is solely derived from the horror which was perpetrated somewhere under its roof on the hapless King Edward II., and which the lapse of five and a half centuries has not been able to dispel. The castle stands on a rising ground among the meadows and woods, commanding delightful views of the country and of the Severn, and as a specimen of a fine baronial fortress can scarcely be competed with in our country.

There existed here a castle in the reign of William I., as the manor house of one of the largest manors in England, owned by the Berkeley family, who derived from a knight of Danish royal blood, named Robert FitzHarding; his second son, Maurice, succeeded him, and dying 1190, was followed in succession by sons and brothers in the same family for many generations. Henry II. granted the castle and honour of Berkeley to Robert FitzHarding, whom he created Baron Berkeley, and whose son married the daughter of Roger de Berkeley, who had been deprived of lands for his espousal of the cause of Stephen. Maurice, grandson of this Robert, was the first who resided here (temp. Richard Cceur de Lion), and he fortified the castle; his son, Robert de Berkeley, joining the side of the Barons, King John seized the castle, but his brother Thomas obtained its restoration in 1233. Maurice, son of this Thomas, joined Simon de Montfort, Earl of Leicster, in the Barons’ War, and again the estates were confiscated, but they were restored by Edward I. to his son Thomas, who had fought well under that King in his northern campaigns, and who was summoned to Parliament .as Baron Berkeley in 1295. The third baron was entrusted with the care of his deposed sovereign, Edward II., after the commission rose at Kenilworth (see that castle, Warwickshire), but being thought by the ruffians, Mortimer and others, who designed the Kings death, to be too kind a custodian of their victim, he was made to give over his charge, together with his castle of Berkeley, whither he had brought the unfortunate King, into the hands of John, Lord Maltravers, and Thomas Gurney. By these keepers, after a month’s residence here, Edward was cruelly and horribly murdered on the 22nd of September, 1327, when

The shrieks of death through Berkeley’s roofs did ring,
Shrieks of an agonising King. 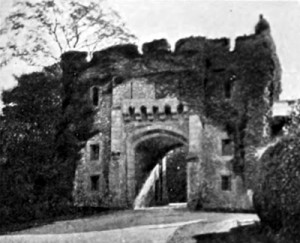 And we find that the authors of this iniquity, Queen Isabella and her paramour, Mtortimer, actually visited this castle the very next year. In the Berkeley MSS. (Fosbroke), it is said that this poor foolish King, during the whole time of his imprisonment, “did nothing but lament for his wife, singing love songs in a low voice, and grieving that she would neither see him, nor permit his son or any of his relatives to come near him. The Queen was afraid that the Church would compel her to live with him again, and therefore urged his death”. His keepers tried at first to poison his health, by filling the pit below his chamber with putrid carcasses, of which he complained once bitterly from the window to some carpenters at work. Berkeley Castle did not figure during the Wars of the Roses. Richard III. was here in the eleventh year of his reign, and created the first Viscount Berkeley, Earl of Nottingham; but in spite of this, he espoused the cause of Richmond, and fled to him on his landing at Milford Haven; he likewise, in order to spite his heir, made over his castle and the honour of Berkeley to Henry VII, who, in return, on his accession, made his supporter Marquess of Berkeley, but took care to retain the property, which remained in the hands of the Crown for sixty-one years, until the death of Edward VI., when Henry, the twelfth Lord Berkeley, recovered it.

Queen Elizabeth visited him here in 1572. During the Civil War the castle was held for the King, and withstood an attack by siege from the Parliamentary troops under General Massy. Charles himself was there in August 1643. In 1697 the fourteenth lord was made Earl of Berkeley.

In 1810, the succession was disputed to this title, and the question is not settled to this day. Admiral Sir Maurice Fitzhardinge Berkeley, a very distinguished naval commander, who succeeded to the estates, was created Baron Fitzhardinge in 1861, and Berkeley continues in the possession of his successor.

In Berkeley Castle the buildings are of several periods. The Norman shell keep, the most ancient part, is irregularly circular in plan, and is flanked by three semicircular towers, and a square one of later construction; its walls are massive and high. There is an external staircase giving access to the keep, and over it a room has been built at a later period which tradition assigns as the scene of the murder of Edward II.; Horace Walpole describes it as “a dismal chamber in the square tower, almost at the top of the house, quite detached, and to be approached only by a kind of foot-bridge”. The various buildings of the castle arc contained within the outer wall, facing the keep on its mound, and having six or seven angles and faces. Parker says “the whole arrangement of the domestic buildings is so good, and has been comparatively so little disturbed, that though mostly of a date prior to the fifteenth century, it is given as an example of the manner in which domestic conveniences were adapted to the requirements of a castellated residence where security had been the primary consideration”. The great Hall is perfect, and is a very fine one of the fourteenth century. The kitchen is remarkable, being hexagonal in shape with immense fireplaces between the windows, and two recesses for cooking on two of the other sides; it rises to the full height of the building, with a heavy timber roof added by Henry VII. The bakehouse and oven, the larders, the great cellars for wine, with groined roof supported by pillars in Norman work, are all extant and still in use, the wall of these cellars being in places 13 feet thick where the outer wall has been buttressed. Above the cellars are two beautiful chapels of Decorated period, which had fallen into disuse and perhaps desecration as early as 1364, when they were restored under Papal authority. (Castles Of England, Sir James D. Mackenzie, 1896)