Fortified manor house or castle, built circa 1345, and partly remodelled by the Earl of Stafford a century later. The surviving remains consist of a restored medieval gatehouse, curtain wall and four octagonal angle towers. A range of buildings lines the inside of the western curtain wall, including the 15th century great hall and a kitchen range. The brick block at the northern was added circa 1820. The north west range is timber framed and dates from the 16th century. The surrounding moat is water filled. The entrance bridge crosses the east arm to the gatehouse. (Pastscape)

The Castle was bought by Sir Thomas Dilke in 1599 and the Fetherston-Dilke family still live in it today.

It is only open one day a year under the National Gardens scheme. 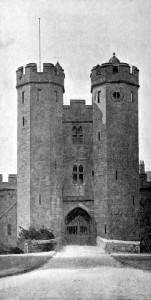 Maxstoke Castle is a fine example of a fortified dwelling of the fourteenth century, and one of the few structures that have been preserved in their original defensible aspect; it stands to the E. of Coleshill, in a finely wooded park with an avenue of lofty elms leading up to it. The trace of the outer walls is a parallelogram, having octangular flanking towers at the angles; the whole is in excellent preservation, and almost unaltered, giving a proof of the state in which we might reasonably expect the greater portion of the castles in this country to have survived, had they met with care and respect, instead of the neglect and wilful destruction, to which they have been subjected generally.

The great gatehouse, which is very perfect and a line example, has a passage with a stone groined roof, and in front is flanked with hexagonal towers on each side of the entrance; the grooves for the portcullis are there still, and the old gates themselves, faced with iron plates to resist fire, remain in a perfect state, with the arms of the Stafford family, a knot and other devices, embossed on the iron. 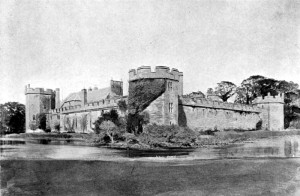 Around the bailey, or court, against the walls, were originally buildings which served as barracks for soldiers, and for offices; they were usually built of timber quarterings, with the interstices in rubble or plaster work, and could not of course be expected to last as long as the masonry. Part of the N.side was rebuilt in the seventeenth century, and this portion with the W. side is that which now exists. The room over the gateway has a door communicating with the battlements and the allure round the wall. On approaching the castle by the wooden stair you enter first the chapel, which has a magnificent W. window, and occupies a position transverse to the hall, and across the end of it, being two storeys in height. It is of the time of Edward III. A very full account of this mansion is given by Parker, from whose second volume many of these details are taken. In the chapel in 1459, were solemnised the marriages of John Talbot, son and heir of the Earl of Shrewsbury, with Katherine Stafford, daughter of Humphrey, first Duke of Buckingham, and also that of Lord John, his youngest son, afterwards Earl of Wiltshire, with Constance, daughter and heiress of Sir Henry Green, of Drayton, in Northamptonshire. 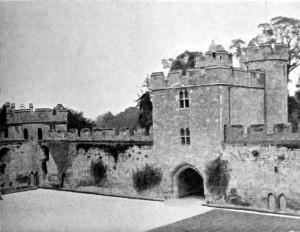 Leading to the chapel is the great baronial hall with the dais at the end, and near it an entrance to a tower having octagonal apartments; from the hall, too, you enter through a vestibule into the withdrawing room, panelled with oak, and having a very fine chimneypiece. The kitchen is built, curiously, on the other side of the chapel, necessitating thereby the carrying of everything thence to the hall through the chapel, for which arrangements were made in the building; the old fireplaces in the kitchen remain nearly perfect, and the oak panelling is remarkable.

The outer walls with their four corner towers and gatehouse are quite perfect, and outside is the moat with a bridge over it, which is all original work; externally, therefore, this castle has a very formidable appearance, and although well calculated for defence, it was evidently intended not merely; for a military fortress, but for a secure dwelling-house in troublous times. 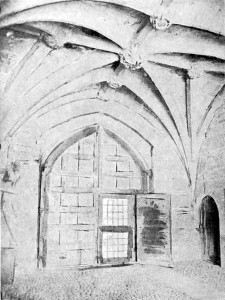 The lord of the manor of Maxstoke (temp. Henry III.) was Hugh de Odingsells, whose grandson (temp. Edward I.) had by Ela, daughter of William Longepee, Earl of Salisbury, four daughters, co-heiresses, of whom the eldest, Ida, married John, son of Sir Thomas Clinton, of Assington, and conveyed this manor to her husband, who died (8 Edward II.), leaving two sons, of whom the younger, William, stood high in the favour of Edward III., and was made by that King Justice of Chester, Warden of the Cinq Ports, and Constable of Dover, and was (11 Edward III.), advanced to the earldom of Huntingdon. He it was who, in 1346 (19 Edward III.) reared this castle, and also enclosed the park, famed for its immense oak trees. This earl, dying without issue, bequeathed the place to his nephew, Sir John de Clinton, after whom it passed through several hands, until, in 1438, it was exchanged for other manors with Humphrey, Earl of Stafford, created in 1444 Duke of Buckingham, with precedence over all other dukes except those of Royal blood. He lived here, as well as at Stafford Castle (q.v.), and repaired the place, adding the iron-plated gates before-mentioned, but was killed at the battle of Northampton in July 1460, when his son, Humphrey, Earl of Stafford, having died of wounds received at the battle of St. Albans in 1455, he was succeeded by his grandson Henry, the victim of Richard III., who was beheaded without trial at Salisbury in 1483. Thereupon the estates were seized by Richard, who, coming here on his march to Nottingham, ordered the inner part of this castle to be dismantled and removed to Kenilworth, which could hardly have been carried out. Henry VII. restored the place to the family in the person of Edward Stafford, son of the late duke. This well-known nobleman was high in favour at first with Henry VIII., and was made Lord High Constable of England and Knight of the Garter, but through the ill-will and contrivance of Wolsey, he was falsely accused, condemned and beheaded on Tower Hill, May 17, 1521. It was, on being told the fate of this duke, that the Emperor Charles V. is said to have exclaimed: “A butcher’s dog has killed the finest buck in England”. He it was who built the great castle of Thornbury, Gloucestershire (q.v.), but lived not to complete it. Then the great wealth and titles of this family sank; Maxstoke fell again to the Crown, but was given by Henry VIII. to Sir William Compton, whose son sold the estates, after which they came by purchase to the family of Dilke, of Kirkby Mallory, in the possession of whose descendants Maxstoke still remains. It is stated that during the Civil War in February 1643, cannon planted by Lord Brooke near Coleshill were fired at this castle. (Castles Of England, Sir James D. Mackenzie, 1896)