Coveted by churchmen and noblemen alike it has had a long and chequered history. After two sieges during the Civil War, visitors to the castle today see it in its more recent role as a romantic ruin in the grounds of the ‘new’ Sherborne Castle. Only the Southwest Gatehouse and parts of the castle including the Great Tower and the North Range survived. (EH) 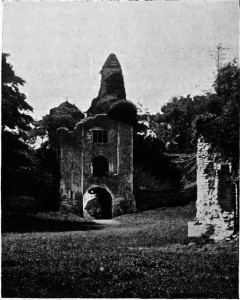 On the E. of the town of Sherborne are the remains of Bishop Roger’s great fortress. It stood on a rocky hill commanding all the adjacent vale on the N. and W., and also the hilly country southward. It covered an area of four acres, and few castles were better or more strongly situated, as it was defended on the N. and W. by steep ground, and on the S. and E. by a wide and deep moat fed from the park, and was further protected by surrounding marshes. The general plan of the fortress was octagonal, with a tower at each angle and a keep, or donjon, in the centre. Leland says (1536): “There be four great towers in the Castelle wall, whereof one is the gatehouse”; and the remains which still exist comprise the gatehouse of Norman work, in three storeys, now shrouded in ivy, with its drawbridge and portcullis, the guardroom or porter’s lodge being on the left, and on the right a turret stair to the upper floors. In the courtyard, to the left, are the keep, the best apartments of the castle and the chapel, which last was upstairs and stood at right angles to the castle on the N.E.; below it is a vaulted basement or cellarage; on the N. is a fine Norman window with some vestiges of the early windows; a few traces exist of an outer staircase giving access to the chapel. Passing through the ruin of the great hall, a splendid pillar is seen which supported the floor of the hall. The garrison well on the E. side of the yard has a covered way of approach. The castle is chiefly of the twelfth century, though part belongs to the reign of Edward III. and part to the first years of Richard II. (Parker.)

The Conqueror settled the manor and park of Sherborne, together with the Earldom of Dorset, on Osmund, a Norman follower, who afterwards turned monk and betook himself to the neighbouring abbey, and died Bishop of Sarum, the prelates of which had a manor-house here before the Conquest. Roger Niger succeeded in 1102, and was a favourite with King Henry I. and the Earl of Salisbury; he it was who reared the three castles of Sherborne, Devizes and Malmesbury, all of them mighty fortresses. He espoused the cause of the Empress Maud, and thereon Stephen in 1139 seized them all, and the whole of the bishop’s property, and threw him into prison. Sherborne was afterwards retaken by Maud and was retained by the Crown for 200 years, until towards the middle of the fourteenth century, when the bishops recovered it. In 11 Edward III. (1338) we find in the Patent Rolls that Robert, Bishop of Sarum, had a licence to crenellate his manor-house (mansum manerii) of Shireburn, and another licence was obtained 1 Richard II. (1377) by Bishop Ralph to the same effect. Edward III. Granted the castle to Montacute, Earl of Salisbury, whom the warlike Bishop Wyvil challenged to mortal combat for its possession. The lists were prepared, and the bishop was in armour for the fight, but more reasonable counsels prevailed, and the Church obtained her own again; this doughty bishop died at his castle in 1376. Both castle and manor were enjoyed by the See until the Dissolution (4 Edward VI.), when the bishop made them over to Lord Protector Somerset, on whose attainder the Crown demised them to Sir John Paulett, Knight, for 99 years; but the bishop managed to get the assignment cancelled at law on the plea of intimidation. Elizabeth then separated Sherborne from the See, and bestowed it on Sir Walter Raleigh, and he held it till his condemnation, when the whole was confiscated. It was to these lands that James I. referred when he refused their restoration to the pleading of Raleigh’s widow, begging for them on her knees of this contemptible King: “A mun hae the londs—a mun hae ’em fur Carr”, he cried. Then, when this precious Carr, Earl of Somerset, with his countess, was convicted of the murder of Sir Thomas Overbury and disgraced, the castle and manor again fell to the Crown and were presented to John Digby, on his return from the Spanish Embassy, in consideration of the private funds of his own which lie had there expended. He was created Baron Digby of Sherborne in 1613, and Earl of Bristol in 1623. He suffered in the Civil War by changing sides—first siding with the Parliament, and then supporting the King—for which he was banished, and died in Paris in January 1652; the Bristol earldom became extinct in 1698. It was remarked at the time that no family ever held this old church property for more than three generations. The estate then reverted to William, fifth Lord Digby, who died 1752, aged 90. The earldom ended with his great-grandson, Edward, second Earl, in 1856, who died s.p., when his property passed to his sister, Lady Charlotte Digby, wife of William Wingfield Baker, a Master in Chancery, who died in 1883, when the estate and castle passed to her nephew, Mr. J. Kenelm D. Wingfield Digby. 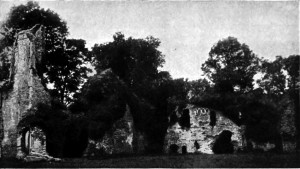 In 1642, Sherborne Castle was held for the King by the Marquess of Hertford with a strong garrison against the Earl of Bedford, who, after an attack lasting five days, gave it up and retired. Bedford’s sister, Lady Anne, the wife of Lord George Digby, was in the castle, and on receiving orders to leave it she rode,off to her brother’s tent at his camp, three-quarters of a mile to the N. of Sherborne, and told him that if he persisted in the siege he would find his sister’s bones buried under the ruins. This was the end of the first siege, but in July 1645, after the storming of Bridgwater, it was resolved to reduce Sherborne if possible, and a brigade of horse and foot was sent, “under that pious and deserving gentleman, Colonel Pickering”, to invest the place. Then on August 2 Sir Thomas Fairfax the general, and Cromwell the lieutenant-general, reconnoitred together the castle and its defences, and afterwards gave orders for a close siege, which was at once actively commenced. On the 6th, a summons was sent to Sir Lewis Dives, the governor, to surrender, but it was scouted, and a regular siege by sap and mines was carried on with the aid of a body of Mendip miners, who were set to work on the 12th. Meantime, the garrison, by their small-arms fire from one of the towers, killed several officers of the enemy, awhile they managed to hinder the approach and burnt a bridge which was being thrown over the rivulet. Fairfax sent in an offer to allow Lady Dives and other women to leave the castle, but it was not accepted. On the 14th the “whole cannon and the demi-cannon”, which had been sent for from Portsmouth and were planted on a new battery, opened fire, and in seven hours had made a large breach in the wall, and beaten down one of the towers, when a final summons was made and firmly rejected by the governor. By this time the approaches were so close to the walls that Fairfax’s soldiers could pull out the wool from the sacks hung on them, and all was prepared for storming the works next day, when the mine was to be completed and every soldier ready with a faggot for filling the ditch, an order to this end producing in two hours above 6000 faggots. On the 14th, Fairfax had succeeded in gaining the tower “in the corner of the castle” from which the deadliest fire had come, and on the 15th, when the storming took place, his men gained another tower which commanded the guns placed by the garrison in defence of the breach, and so were able to drive in the defenders. Then the garrison, losing heart, retreated into the keep and castle, and exchanged their red flag for a white one; but it was too late for staying the soldiers, and a sack of the place was carried out, “all except Sir L. Dives and his lady and some few more being stripped of all they had”, quarter only being given. Great plunder was gained. The garrison was 600, and there were 1400 stand of small arms, thirty horses, “eighteen ordnance, a morter piece and a murderer”, sixty barrels of powder, and much stores and fine things; then there were a great many of the gentry, officers, and ten clergy shut up, who probably had to be ransomed. Thus fell Sherborne Castle, which two or three days after was ordered to be “slighted”,” when the fabric was demolished, and its materials were partly sold and partly used to build the church and a portion of the present mansion. In this latter house William of Orange slept, on his way from the landing in Torbay to London, in October 1688. It was the residence and property of Lord Digby, and now belongs to his descendant. It is built in the form of the letter H, and the centre of it has the interest of having been erected by Sir Walter Raleigh, the wings being added by Lord Bristol after the Restoration.

At the old castle, which had several drawbridges, there was on the N. side a subterranean passage giving access into the neighbouring valley, which long remained unnoticed. (Castles Of England, Sir James D. Mackenzie, 1896)