A motte and bailey castle was probably built in 1067 and survived until the late 13th century. It was a favourite Royal residence with a complex of halls, chambers and chapels, but all that survives is the early 13th century Great Hall built by Henry III, now part of the County Offices complex. The entrance to the Great Hall was altered in the 19th century and the roof was renewed in 1873 by T H Wyatt. The medieval round table is situated on the west wall.

The first and finest of all 13th century halls, with the greatest symbol of medieval mythology, ‘The Round Table of King Arthur’. (open to the public) 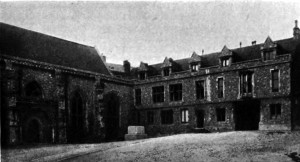 Winchester was the capital of Wessex, and increased in importance as that kingdom predominated in the country; it was the seat of government in the times of Alfred, Edgar, and Canute, but nothing is known of its fortifications in those days. After the Conquest a Norman castle arose here at the bidding of William, the building of which was entrusted to FitzOsborne at the same period that the Tower of London was in progress. (Moody.) It was built on the slope of the hill that commands the town, being separated from the high ground on the W. by a ditch, deep enough to be filled from the river. This fortress was strengthened by Stephen, in the second year of whose reign a synod of prelates was held at Winchester to protest against the seizure by the King of so many castles in the country. The Bishop of Winchester, Henry de Blois, the King’s brother, who owned the castles of Wolvesey, Merdon, Downton (Wilts), Bishops Waltham, and Taunton in Somerset, was one of the aggrieved, and headed a deputation to Stephen in this castle to remonstrate, but the King would not receive them and left for London. At that time, however, the Empress Maud landed in Sussex to claim the crown, and with the aid of these angry bishops, and some disaffected barons, she defeated her rival, and made him prisoner. The following year Bishop de Blois joined his brother, and attacked the forces of Maud who had occupied the castle, and closely invested the fortress, which was in want of stores and provisions.

Now occurred the story of the escape of the Empress through the hostile lines in a lead coffin, her death having been declared to Stephen; but the same ruse is alleged to have been successful also at another castle, and the truth really is that Maud was rescued from Winchester by her natural brother and gallant champion, Robert, Earl of Gloucester, who came to her assistance with sixty followers.

Henry II. is said to have had a house in the N.W. corner of the town, where still are some traces of the town walls and ditch, but nothing more of interest. Winchester was frequented by all the succeeding kings until the time of Edward I., and the castle was commonly called the King’s House. Henry III. was born here in 1206, being called .Henry of Winchester in consequence. He built and rebuilt a great part of the castle, including the Great Hall, which still remains in perfect preservation as St. Stephen’s Hall, or the present Court House. The Liberate Rolls of this reign contain details of much work ordered here, the sheriff of Southampton being directed in 1257 to pull clown and rebuild the great tower of the castle which “threatened to fall”. In 1265 (July 14) Winchester and its castle mere taken and sacked by young Simon de Montfort, second son of the great Earl of Leicester, three weeks before the battle of Evesham. He seems to have gone to Winchester from Pevensey in Sussex, whence he had been summoned to Kenilworth in haste to support his father, and it is difficult to see why he should have gone so far out of his direct route as Winchester. It is asserted that the place never recovered from this violence. In an old seventeenth-century drawing the castle is shown as a quadrangular enclosure, having a large donjon, or keep, one hundred feet square, at the north-east corner, and square flanking towers at the other three; the entrance gateway is on the W., having a circular tower on each side. The approach to it was by a drawbridge over the ditch, as is mentioned in the Liberate Roll of 23 Henry III. (1238). At the end of the reign of John the castle was captured by the French army under the Dauphin. Afterwards it was used as a State prison and for the Assizes, though always occupied as a royal palace whenever the Sovereign came to Winchester. It was here that Henry III. imprisoned a whole jury in a dungeon below the castle on their refusal to convict certain persons whom he thought guilty of committing depredations in the neighbourhood. James I. presented the palace in fee simple to Sir Benjamin Tichborne and his heirs, as a reward for proclaiming him King in England. In the Civil War of the reign of Charles I. the castle was strongly garrisoned for the Crown under Lord Ogle the governor, and was one of the places appointed to be reduced after the fall of Bristol, together with Devizes, Basing, Wallingford, and other garrisons, which Sprigg in his “Anglia Rediviva” calls “vipers in the bowels” of the country, inasmuch as they hindered the trade of the west of England with London. Accordingly the Lieutenant-General Cromwell, with a brigade consisting of the regiments of Colonels Montague, Pickering, Hammond, and Sir Hardress Waller, and three regiments of horse, after taking Devizes, was sent on to Winchester, where he arrived September 28, 1645. Cromwell, in his despatch to Parliament, states that, his summons to the garrison to surrender being refused, he prepared his batteries, and on Friday, October. 3, opened fire on the castle with six guns, after firing a round from which, he sent a second summons, which also being refused, “we went on with our work, and made a breach in the wall near the black tower, which, after about two hundred shot, we thought stormable, and purposed on Monday morning to attempt it”. On Sunday night, however, the governor “beat a parley”, and the place was given up, with a loss to the besiegers of under twelve men. “The castle was well manned with 680 horse and foot, there being near 200 gentlemen, officers and their servants; well victualled with 15,000 weight of cheese, very great store of wheat and beer, near twenty barrels of powder, seven pieces of cannon; the works were exceeding good and strong”. Hugh Peters, in his report to the House, says the breach made was big enough to admit thirty men abreast: that the garrison sallied out and beat their besiegers from their guns at first, but on the batteries being recovered “we played our gravadoes (shells) from our mortar-pieces, with the best effect I have seen, which brake down the mansion house in many places, and at last blew their flag of defiance into the air, and tore the pinnacle in pieces upon which-it stood … The Lord’s day we spent in preaching and prayer, whilst our gunners were battering, and at eight o’clock at night we received a letter from the governor for a treaty … When we entered we had six distinct works and a drawbridge to pass through, so that it was doubtless a very strong piece, and well appointed”. Then by order of the Parliamentary Committee the old castle was “slighted” and demolished, though not entirely, as it was given to Sir William Waller, who was brother-in-law to Tichborne, as a reward for his previous capture of the city. The remains of the fortress were swept away by Charles II. and Sir Christopher Wren. Some old subterranean vaulted passages and a postern were discovered fifty years ago, and a sallyport was opened up, which is an interesting specimen of thirteenth-century work.

The only complete portion of the castle remaining is the Great Hall, built very early in the thirteenth century (Parker), and completed in 1236; it is 111 feet long by 55 feet wide, and is divided by piers and stone arches, into nave and two aisles, like a church, similar to the designs of the halls of Oakham, in Rutland, and Fotheringhay, and some other Norman structures. Full details of this fine building are given in the “Proceedings” of the Archaeological Institute at Winchester, in 1845. The roof dates from the reign of Edward IV. An interesting relic is to be seen here, hung up over the judges’ seat in the Nisi Prius Court, a table which is called the Round Table of King Arthur, and of which there are records early in the sixteenth century. It is 18 feet in diameter and painted in radii with twenty-four divisions, each lettered with the name of one of Arthur’s knights.

On the space in front of the old castle, in 133o, was beheaded Edmund, Earl of Kent, the brother of Edward II., on account of a pretended conspiracy, invented by Mortimer, whose own fate followed six months after. The earl was kept waiting the whole day before an executioner could be found to behead him.

On the site of the castle, and probably with the materials belonging to it, Charles II. began in 1683 the building of an immense palace, from the designs of Wren; the centre of the structure coincides with the centre line of the cathedral in front, prolonged to the Castle Hill. The design of the too Merry Monarch was to open from it to the cathedral, through the heart of the town, a broad street (for which the land was bought) in which, in special houses, were to be lodged his great officers and the nobles and ladies of the Court. Marble columns for the palace were presented to him by the Grand Duke of Tuscany, and it was intended to rear a cupola which might be visible from the sea, twenty-five miles off. On the death of the King, when the building was only a shell, the scheme dropped, and the place being fitted up was used, in 1779, to house French, Spanish, and Dutch prisoners. Then, in 1792, George III. gave the use of it to the emigrant French clergy, who lived there for four years, and in 1811 it was turned into barracks, which purpose the building still fulfils. It received great injury from a fire which occurred in 1895. (Castles Of England, Sir James D. Mackenzie, 1896)