Portchester Castle’s commanding location has made it a major factor in the Solent’s defences for hundreds of years.

The most impressive and best- preserved of the Roman ‘Saxon Shore’ forts, Portchester Castle was originally built in the late 3rd century. Covering an area of nearly ten acres, it is the only Roman stronghold in northern Europe whose walls still mainly stand to their full 6 metre height, complete with most of their originally twenty towers. Subsequently housing a Saxon settlement, the huge waterside fortress became a Norman castle in the 12th century, when a formidable tower-keep was built in one corner. (EH) 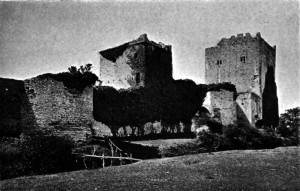 On a low lying tongue of land extending into shallow water on the N. of Portsmouth Harbour, which they knew as the Portus Magnus, the Romans formed a fortified post which was both a camp and a port, as its name implies. The former contained nine acres of space, with three of its sides protected by the sea, and the neck of land by strong ramparts of earth and wet ditches, while the port was a magnificent one where their fleets could lie in safety, easily protected at its narrow entrance, and convenient for passage between England and the N.W. of Gaul. The rectangular enclosure is formed by a well-built wall of flint with bands of red tile, from 15 to 20 feet in height, and flanked at regular intervals and at the corners by semicircular headed bastions, hollow in the centre, those at the corners being open in the gorge. No Roman remains exist in England in so perfect a state. The E. face, which is washed by the sea, is 40 feet in height and contains in the centre the water-gate, opposite to which on the W. is the main entrance to the fortress. There was probably a wooden platform round the inside forming a covered allure for defence of the wall. N. of the land-gate, and at some distance from the N. wall, there stretches across the neck of the promontory a high bank of earth defended in front by a broad and deep wet ditch, divided now by a gap of earth as entrance to the work. Inside this Roman camp, Henry I. in 1133 founded a priory of Augustine Canons, and built the existing church of St. Mary. Then in the N.W. corner of the enclosure he erected a rectangular keep, faced with Caen stone, for which the Roman wall was removed, having three of its angles slightly projecting beyond its face. To protect this donjon was erected a strong inner enclosure formed by two walls meeting the W. and N. faces of the enceinte. It had its own defended gateway and an angle tower, and contained the dwellings and offices of the garrison. 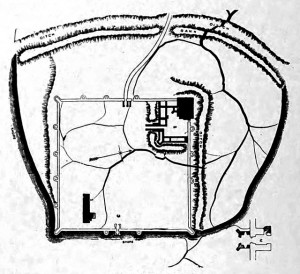 The military history of Porchester is meagre, though it was of importance in early times. In 1101 Duke Robert of Normandy invaded England at this place on his attempt to gain the crown usurped by his younger brother Henry I. It has always been held by the Sovereign. King John was here on eighteen occasions, for fifty-two days altogether, between 1200 and 1214, and seems to have used the cellars for the storage of large quantities of wine; he made Porchester his place of departure when sailing to the Continent. In Henry III.’s time the castle received extensive repairs and additions, and was placed in the keeping of Simon de Montfort, second son of the Earl of Leicester, whose mother, the Princess Eleanor, in June 1265, on leaving Odiham Castle, Hants (q.v.), at the recommencement of hostilities after the escape of Prince Edward (see HEREFORD), made her way thence in order to join him at Porchester, attended by a cavalcade of eighty-eight horses; but she soon after left this place for the greater security of Dover. Edward I. and Edward II. were frequent visitors here, and Richard II., at the close of the Decorated period, carried out many additions. It was from this port that Henry V. set out for his glorious campaign of Agincourt, and here were arrested in 1415 Richard, Earl of Cambridge, Henry, Lord Scrope of Masham, and Sir Thomas Grey of Heton, for conspiring to place the Earl of March on the throne, and on their voluntary confession they were adjudged to die and were beheaded, Scrope’s head being affixed on the Micklegate of York. To Porchester came Margaret of Anjou to be married to the young Henry VI. Queen Elizabeth used this castle and held her Court here, and her armorial bearings mark certain Tudor alterations. Since that time, honour and glory seem to have deserted this fortress, which passed into private hands, but has from time to time been used as a State prison. It now (1896) belongs to Mr. T. Thistlethwayte, of Southwick. During the last century the Crown held the castle on lease, and it was fitted up as a place of detention for French and Spanish prisoners of war. In 1761 there were no fewer than 4000 of these, and after the battle of Camperdown it was filled with sailors from the Dutch fleet.

When the Emperor Napoleon was sent to Elba, and the Bourbon dynasty returned in 1814, the English Ministry agreed to restore the French prisoners, provided that they would first declare their adhesion to the House of Bourbon, and in token thereof, to effect their liberation, the prisoners at Porchester were directed to hoist a symbolic white flag on the castle tower. The proposal was most unpalatable to the majority of French officers there, who were soldiers of the Empire, and a whole day of vehement discussion ensued; but at last principle gave way to prudence and the love of home, and in the evening the white flag of old France floated on the ancient tower of Porchester. A few days after the prisoners were released.

The keep contained four storeys, having timber floors, with a spiral staircase giving access to them, and a vaulted stone basement, used as a cellar. At the S.E. angle of the inner wall is a large square tower, set diagonally, in order to flank both sides of the wall; and at the N.E. angle of the outer wall is a large and strong tower, connecting the rampart walks on either side; the base of this tower is Norman, and the top and battlements are Early Perpendicular. There is a very curious gatehouse entrance to the inner ward, with two long parallel walls of approach supporting a drawbridge, and then a passage, 15 feet long, once ending in a portcullis and gate, then a further 17 feet abutting on a grand Decorated doorway in front of the original Norman entrance in a plain square tower. The watergate is Roman, altered in the Decorated period, and in the landward entrance the Roman work has been displaced by Decorated and Early Perpendicular work. There is in it a well-fortified upper chamber which is vaulted. (Castles Of England, Sir James D. Mackenzie, 1896)