The Castle has an exciting visitor attraction ‘Oxford Castle Unlocked’

St George’s Tower is thought to date back to Saxon times, the Tower is a striking survival from the Castle’s heyday. Below ground is the Crypt of St George’s Chapel, with its beautiful Romanesque columns. Oxford Castle was a classic motte and bailey castle and the Mound, or motte, still stands today.

HMP Oxford was on the site of part of the medieval castle of Oxford. A castle gaol is first mentioned in 1230, and by the 1780s the remnants of the castle were still in use as a prison. The prison finally closed in 1997. 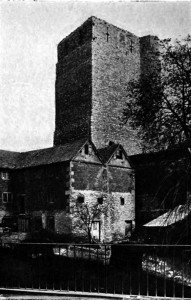 When Oxford closed its gates against the Conqueror, and he had stormed and taken the city, it followed that he should take measures to keep the people of the place in subjection. Accordingly, hawing bestowed the town on his faithful follower, Robert d’Oilgi, or D’Oiley or D’Oyly, he directed him to build and fortify a strong castle here, which the Chronicles of Osney Abbey tell us he did between the years 1071 and 1073, “digging deep trenches to make the river flow round about it, and made high mounds with lofty towers and walls thereon, to overtop the town and country about it.” But, as was usual with the Norman castles, the site chosen by D’Oyly was no new one, but the same that had been long before adopted by the kings of Mercia for their residence; the mound, or burh, which was now seized for the Norman keep had sustained the royal house of timber in which had dwelt Offa, and Alfred and his sons, and Harold Harefoot.

If we turn to the account of Wallingford Castle in Berkshire, it appears that Robert D’Oyly, who had accompanied William in his progress to Wallingford, whither he had been invited by the Saxon noble Wigod, had already erected a strong fortress at that place, and it is evident, from the scanty remains at both sites and from old plans and accounts, that these two strongholds bore a close resemblance to each other in all points.

In the Bodleian Library is an MS. by Anthony à Wood, written about 1682, which is given by Sir John Peshall in his book on the antiquities of Oxford; this describes the fortifications of Oxford Castle, which was built on the W. of the city, close to the river Isis, that protected it on that side, the water defences being carried round from the S., and by the E. side to the N.W., by an artificial cut, through which the stream was diverted in a broad and deep moat. 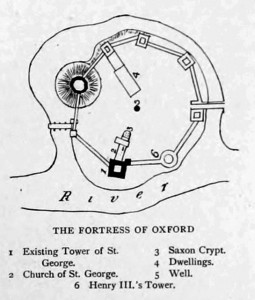 The southern and chief approach to the castle was from what is now Castle Street by a bridge 40 paces long across the moat, and through an embattled passage, between walls defended by portcullises and machicoulis, through the gateway into the castle yard. Here, on the left, at the end of the bridge, stood one of the mural towers, from which a curtain wall extended on the left to a large round tower, from the other side of which “a fair embattled wall” ran to the S.E. corner of a huge square bastion, called St. George’s lower, and still existing, close to the mill and weir on the river. From the opposite corner of this bastion, the curtain wall joined the fortifications of another bridge crossing the Isis on the N. side, called the Osney Bridge, which had a gatehouse and turret, the whole of which has disappeared. Eastward of this bridge the wall continued with a covered way and steps ascending the great mound up to the “shell” keep, built upon its summit not later than the time of Maud, if it is not the work of D’Oyly himself.

The top of the mound is 60 feet above the general level, and. measures 40 feet in diameter, and it was enclosed at its foot by a thick stone wall, as was the mound of Windsor. The summit was occupied by a shell tower built in the form of a decagon, the foundations of which were discovered at the end of the last century. From the E. side of this the wall descended the side of the mound to another mural tower, of which towers there were three on the E. side, connected by curtains.

The ruins of these, and of two barbicans or outworks, are said to have been standing in 1649, when four of the towers were pulled down in order to erect some new works for the Parliamentary garrison. This enclosure then formed one large enceinte, and no traces of any inner ballium wall have ever been discovered within this area.

Robert D’Oyly afterwards, in concert with his comrade in arms, John d’Ivry, erected a chapel, dedicated to St. George, against the large tower, called by the same name, on the W. line of wall. This chapel has disappeared, but at the same time that excavations were made in the mound there was discovered, at the end of the above chapel, a curious underground crypt, having four short columns with curiously carved and disproportioned capitals, supporting a groined stone roof. This interesting relic, which Sir John Peshall describes as Saxon, was destroyed, as it stood, by the town authorities of Oxford, in order to adapt the site to their new gaol, the crypt being rebuilt in a neighbouring cellar.

The high tower of St. George formed, with the keep, the chief defence of the fortress, and it has been described as originally of Saxon construction. This tower is now all that remains of the seven or eight which constituted the castle of Oxford; it is 30 feet square at its base, tapering upwards to a square of 22 feet at its lofty summit, where the pitch of its original roof is clearly marked. Above the roof the parapets rose another 13 feet, having on opposite sides two large openings for working military engines for the discharge of missiles, supported on each side with loopholes for archers. Lord Lyttelton says that the side of the fortress covered by this tower was deemed impregnable. The tower of St. George is said to have been chapel below, into the W. end of which an entrance has been formed, having a circular-headed Norman arch.

The excavations in the great mound also laid bare a covered stone staircase leading to a small hexagonal chamber, with a vaulted and ribbed roof, in the centre of the mound, 12 feet in diameter and 12 feet high, in the middle of which was a circular stone well, 54 feet deep, which, being cleaned out, yielded a quantity of bones of horses and dogs, with several horse-shoes, and, at a greater depth, some human skeletons. A fine spring of water resulted on the well being cleared. Further digging round this chamber discovered the foundations of the shell keep, concentric with this vault, which seems to have been on the plan of those of Tonbridge, Arundel and Cardiff, having the lodgings built round the interior, leaving only an air space in the centre, 22 feet across.

The second Robert D’Oyly, son to Nigel, the brother of the founder, who succeeded his uncle, and founded the monastery of Osney, near by, took part against Stephen, and delivered up his castle of Oxford to the Empress Maud for her residence. She accordingly came here with great state in 1141, with a company of barons who had promised to protect her during the absence of her brother, the Earl of Gloucester, in France, whither he had gone to bring back Prince Henry. Gloucester and Stephen had only recently been exchanged against each other, the Earl from Rochester and Stephen from Bristol, and the latter lost no time in opening afresh the civil war, by at once marching rapidly and unexpectedly to Oxford. Here he set fire to the-town and captured it. He then proceeded to shut up closely and to besiege Maud in the castle, from Michaelmas to Christmas, trying to starve out her garrison, whilst from two high mounds which lie raised against the keep, the one called Mount Pelham, and the other Jew’s Mount, he constantly battered the walls and defences with his engines of war, which threw stones and bolts.

Maud, who was a mistress of stratagems and resources—she had escaped from Winchester Castle on a swift horse, by taking advantage of a pretended truce on account of the ceremonies of Holy Cross, and had at Devizes been carried through the enemies lines dressed out as a corpse in a funeral procession—was equal to the occasion when provisions failed. Taking advantage of a keen frost which had frozen over the Isis, she issued one night from a postern, and crossed the river on the ice, accompanied only by three faithful followers. The country being covered with deep snow, they wore white garments over their clothes, and succeeded in eluding their enemies, walking through the snow six long miles to Abingdon. Here a horse was obtained for the Empress, and the party got safely next morning to Wallingford Castle (BERKS, q.v.). After her escape, Oxford Castle was yielded to Stephen the next day.

During the siege, the students and townsmen not having access to the chapel of St. George in the castle, a new church was built near by for their accommodation by the monks of Osney, and this is now known as the church of St. Thomas.

As no proper dwellings for royalty existed in this castle, the palace of Beaumont was built, or was finished, by Stephen, and became a favourite residence of Henry II., three of whose sons, including Richard Coeur de Lion, were born in it. So, in time, the castle fell into neglect and decay; and though in the reign of Edward II. it was put into a state of defence and victualled, in the time of Edward III., who chose Woodstock for his abode, this castle had become ruinous from disrepair. Henry III, had in the previous century done much for the fortress, building the Round Tower (the next to St. George’s) and repairing the bridges.

Grose gives a view of the castle copied from one by Ralph Agus, made in 1578, but its incorrectness is shown by Peshall; it is given by Skelton entire. In the seventeenth century the castle was placed in a state of defence for King Charles, and was demolished, as before mentioned, in 1649.

Grose affirms that in 1751 nothing was left except the great tower now standing, which was used as a county prison, and some of the curtain wall attached to it. Below the mount, in the castle yard, were the remains of the ancient sessions house, a relic, probably, of the old hall, as at Leicester, wherein, in 1577, was held “the Black Assize”, so called from a distemper brought by prisoners, of which the lieutenant of the county, two knights, eighty gentlemen and justices of the peace, and almost all the grand jury, died “from the poisonous smell of the gaol”. A large number of persons also in the town .were attacked. (Castles Of England, Sir James D. Mackenzie, 1896)