Kimbolton Castle, originally a medieval castle, underwent many changes before the Great Rebuilding by Vanbrugh, Hawksmoor and Adam, as the country house of the Dukes of Manchester. The Castle’s most famous resident was Katharine of Aragon, who died here in 1536, and small sections of the Tudor house have survived. Although the Castle now belongs to Kimbolton School, visitors can still see the impressive range of State Rooms, with an outstanding set of murals by Pellegrini. A small Heritage Room houses displays on the Castle’s history. The Castle is set in extensive, wooded grounds, with pleasant walks. 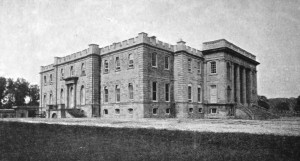 The magnificent seat of the Dukes of Manchester, is built on the remains of an ancient castle of unknown but very remote origin. Leland, writing before the middle of the sixteenth century, says of the existing structure: “It is double dyked, and the building of it metely strong: it longed to the Mandevilles, Earls of Essex. Sir Richard Wingfield built new fair lodgyns and galleries upon the old foundation of the castle.”Camden, writing some fifty years later, believes Kimbolton to have had originally the name Kinibantum, and to have been the seat anciently of the Mandevilles, then of the Bohuns, Earls of Hereford: next of the Staffords, and after them to have pstssed to the Wingfields. Sir Richard Wingfield, K.G., twelfth son of Sir John of Letheringham, Suffolk, Knight, and Chancellor of the Duchy of Lancaster, married first, Katherine, daughter of Richard, Earl Rivers, and widow of Henry Stafford, Duke of Buckingham, after whose attainder he obtained a grant of Kimbolton Castle and lordship from Henry VIII., with whom he stood in high esteem. He was sent by Henry as ambassador to Spain, and dying there, was buried at Toledo, when his son, Sir James, sold Kimbolton to Sir Henry Montague, third son of Sir Edward Montague, the son of a Northampton squire, who was a great lawyer (temp. Henry VIII.) and became Speaker of the House of Commons, advancing into special favour with the King, who appointed him one of the sixteen executors of his will, and governors of his son, Edward VI. Connected with this man’s office as Speaker, there is a story exhibiting forcibly the persuasive action by which, in Tudor times, monarchs obtained their supplies. Montague is sent for, as Speaker, by Henry, and coming into the presence, kneels before him. “Ho, they will not let my Bill pass,” says the King; then, laying his hand on Montague’s head, adds: “Unless that Bill is passed by such a time to-morrow, by such a time to-morrow this head of yours will be off.” Whereon he applied himself with such diligence and effect in arguing against the objections of the members in opposition, that, before many hours had passed, the Bill was passed also, and Henry got his supplies. His third son, Henry, the purchaser of Kimbolton, was likewise a great lawyer, and was made Lord High Treasurer by James I., who created him Lord Montague of Kimbolton and Viscount Mandeville, choosing the name of the oldest possessors of his property for his second title. In 1626, Charles I. made him Earl of Manchester, and his eldest son, Edward, became the celebrated Parliamentary General, who, being born at Kimbolton, was a fellow-countryman of Oliver Cromwell. His grandson was raised to the dignity of Duke of Manchester by George I. in 1719, at which period the castle was almost rebuilt.

Kimbolton formed part of the jointure of Queen Katherine of Arragon, after her divorce was effected. In 1534, when Henry VIII. was ridding himself of her, he first directed that she should go to the castle of Fotheringhay, in Northants ; but she objected on account of the malaria prevalent there, being in very weak health. So Kimbolton was chosen for her, where also the air was said to be noxious on account of the damp situation, and thither the poor ex-Queen was forcibly taken in the month of December. The castle is described as a very strong place in a cross-country valley, guarding the road between Bedford and Huntingdon; and here on January 7, 1535-6, little more than a year after her arrival, Katherine faded and died. The chamber in which she expired is shown in the castle; it is hung with tapestry which covers a little door leading to a closet, still called after the Queen, whose ghost is said to haunt the structure. One of her portmanteaux is shown also, covered with red velvet and having the letters K. R. with the Queen’s crown upon it.

There is a plot of ground about a mile W. of Kimbolton, called Castle Hill, where are the appearances of ancient buildings and the marks of ditches. (Castles Of England, Sir James D. Mackenzie, 1896)