Castle Acre is a very rare and complete survival of a Norman planned settlement, including a castle, town, parish church and associated monastery. All this is the work of a great Norman baronial family, the Warennes, mainly during the 11th and 12th centuries.

First came the castle, founded soon after the Conquest by the first William de Warenne, initially as a stone ‘country house’. During the first half of the 12th century, however, more disturbed conditions prompted its progressive conversion into a strong keep, further defended by stone walls and an immense system of ditched earthworks. Still impressively visible, these are perhaps the finest village earthworks in England.

The ancient and formidable earthworks that have acquired this name, together with such remnants as are left of the mediaeval castle afterwards built among them, stand on the N. side of the river Nar, about four miles N. of the town of Swaffham. These early British earthworks consist, first, of a mighty circular mound, surrounded by a broad dry ditch, to which is attached, southwards, another work of horseshoe shape, having a rampart and external ditch; the axis of these two works ranges N. and S., and on the E. of the mound extends another enclosure, whose ditch unites those of the other two works, and encloses with its bank an ear-shaped piece of land.

All this possibly formed a British Icenian fortress, and, when taken possession of by the Romans, was used by them for the E. limb and defence on that side of a new castrum which they proceeded to draw out upon the W. side of it, being a great rectangular work of rampart and ditch, enclosing about to acres of ground, and measuring 350 yards N. and S. by 420 E. and W., the bank of it standing about 20 feet above the outside land and in great measure perfect even now.

When the Normans carne and fixed on this ancient fortification, as they did in numerous other instances, for the site of a stone castle, they so planned the work that the Roman camp should form the outer ballium, or bailey, of it, retaining the military road which passed through it from S. to N., and placing gatehouses at both ends of this road, which became in mediaeval times the position occupied by the residences of all the tradesmen and dependents of the castle, under the jurisdiction of its constable, and which forms at the present clay the village, still called Bailey Street. 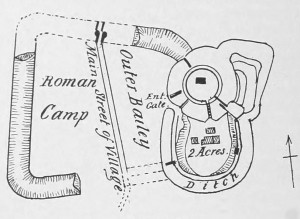 On the summit of the great mound, as usual, was erected the Norman keep, which seems to have been low and circular and a shell-keep, with buttresses, as at Clare. From this wall four or five short cross-walls radiated across the ditch, as traverses, those on the E. and W. uniting with a strong boundary wall, forming a curtain defence round the whole rampart of the horseshoe work below the keep. Within thi enceinte of the lower level were the main buildings of the castle, and some foundations of these are still to be traced ; access was gained from them to the keep by a flight of steps ascending the mound out of the dry dlitch. Mr. Harrod states that he discovered on the mound the foundations of an oblong building, 50 feet by 40, the walls being 13 feet thick, entered by a door on the S. front ; this may have been a citadel within the outer circular shell, round which also on the inside buildings were probably ranged.

On the E. of the mound, the smaller low-lying piece of ditch-surrounded land may have been merely kept as a protected pasture for the garrison horses and cattle.

Of the gatehouses entering the outer bailey that on the N. end is still standing, having two circular flanking towers of flint rubble of Early English work, with a portcullis groove and a chamber above for working this; there is a pointed arch gateway which was furnished with oak gates at each end, the huge pivots on which these swung still remaining. Near this end gate on the E. side of the street was the castle chapel, converted afterwards into a dwelling-house. Blomefield conjec¬tures from traces that were visible in his time that the S. gate was in structure similar to that on the N. end.

William de Warren, the first Earl of Surrey, who was married to the Lady Gundreda, half-daughter to the Conqueror, received as the price of his services no less than 139 lordships in this county, including the manor of Castle Acre, and here, probably at the bidding of his father-in-law, he founded in the ancient fortress the Norman stone castle above described. Moreover, going with his wife on a pilgrimage to Rome, they visited the Abbey of Clugny, in Burgundy, on their way, and were so prepossessed with all they saw at that great institution that they determined to found a Cistercian monastery at home, and on their return built at Lewes, their principal residence, a priory for twelve Cluniac monks in 1078. His beloved Gundreda dying in 1085, Earl William at once founded another monastery at Castle Acre, subordinate to the Lewes Priory, within the castle precincts; he then took to a religious life, and died in 1089. His son William succeeding, removed the monks to the magnificent priory outside the castle on the W. side, and, dying 1135, was followed by his son William, third earl, who sided with King Stephen, and going to the Holy Land died there in 1148, leaving an only daughter, Isabel, who married, as her second husband, Hameline Plantagenet, the brother of Henry II., and who succeeded, jure uxoris, to the vast estates of the Warrens and their earldom. He is one of the signatories of the Great Charter. His son by Isabel succeeded him as fifth Earl de Warren and Surrey, and married Maud, daughter of William Marshal, Earl of Pembroke, the Protector, by whom he had Isabel, the wife of Hugh d’Albini, Earl of Arundel and Sussex, and John Plantagenet, born 1231, who was one of the most constant supporters of Henry III. in the Barons’ War, supporting him especially with his castle at the time of the battle of Lewes (sec LEWES, SUSSEX). He was afterwards in high command under Edward I., and took Dunbar and other castles in Scotland from Baliol. King Edward visited him at Castle Acre in 1297, staying there for three weeks. The earl’s son dying during his lifetime, he was succeeded by his grandson John, seventh and last Earl de Warren and Surrey, whose treatment of his estates appears extraordinary. In order to curry favour with Edward II. he surrendered all his lands, including Castle Acre, to that Sovereign, who, after keeping them a year, regranted them to him. Then, being childless, he sold the estates to Aymer de Valence, Earl of Pembroke, and this earl, after ten years’ possession, sold them to the Earl of Athol. But soon after, in the first year of Edward III., we find Earl Warren repurchasing the estates from the Earl of Athol, and immediately from some caprice again surrendering them to the new King, Edward III., who regranted them to Earl Warren for his life, but with reversion to Richard FitzAlan, Earl of Arundel, the son of Alice, Earl Warren’s sister and heir, who obtained the estates at de Warrens death in 1347 ; but the castle had now from long neglect become a ruin. His son, Earl Richard, succeeded him in 1375, a noble and a soldier of high repute, but he sided with the Duke of Gloucester (see PLESHY, ESSEX), and was impeached for treason by Richard II., being beheaded on Tower Hill, when his son-in-law, Thomas Mowbray, Earl of Nottingham, acted, it is said, as headsman. His son, Earl Thonas, however, recovered the estates from Henry IV., and handed them down until I Elizabeth, when a descendant, Henry, Earl of Arundel, sold this manor to Sir Thomas Gresham, who had already bought the priory from the Duke of Norfolk, to whom Henry VIII. had granted it.

The lands were afterwards sold to Thomas Cecil, and, later, were bought from William Cecil, Earl of Exeter, by Sir Henry Coke, the famous lawyer, who was Lord Chief Justice at that time ; from him the place has passed on in his family to its present owner, the Earl of Leicester. (Castles Of England, Sir James D. Mackenzie, 1896)