Earthwork remains of a motte and bailey castle destroyed 1173.

These ruins are in the Hundred of Stow,a little N. of Stowmarket. Near the church of Haughley are the remains of a very strong castle, which is sometimes called “Hageneth,” and was probably built in Stephen’s reign. During the unnatural war that was waged between Henry II, and his sons, this castle was held by Ralph de Broc for the King, and when Robert “Blanche-mains,” Earl of Leicester, landed at Walton with his army of Flemings, after marching to Hugh Bigod’s castle of Framlingham, and resting there awhile, these marauding troops proceeded to Haughley and laid siege to it, obliging de Broc to surrender it, after which they marched to Leicester. Edward I. in his ninth year granted the lordship and castle to the ancestor of Robert de Ufford, Earl of Suffolk, who died seised of them (43 Edward III.). His heir William dying s.p., his three sisters divided the manor between them, and in the twenty-eighth year of Henry VI. we find William de la Pole, Earl of Suffolk, possessed of the property, or the chief part of it ; afterward Charles Brandon, of Henry VIII s reign, Duke of Suffolk, had the manor. 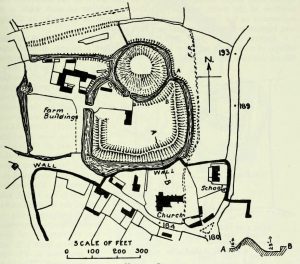 The form of the castle was rectangular, and it was surrounded by a deep moat ; the remains of it are meagre, but the earthen rampart remains on all sides except the N., and some fragments of the buildings can be seen. On the N. side, upon a high artificial mound, which shows the original Saxon or Danish origin of the fortress, stood the keep, whose massive foundations still exist, the mound being also encircled by a ditch. On the W. side is a large rectangular space, apparently an outwork of this castle, the E. side of which abuts on the moat of the keep. its N. and W. sides were defended by a smaller moat, as was perhaps the case on the S also. The area enclosed is seven acres. (Castles Of England, Sir James D. Mackenzie, 1896)