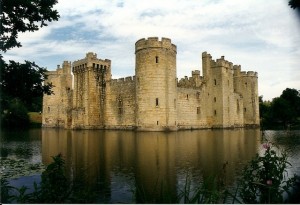 One of the most famous and evocative castles in Britain, Bodiam was built in 1385, as both a defence and a comfortable home.

The castle is completely surrounded by a moat with approaches from the north and south.

Within the bailey is a ruined range of domestic buildings which were probably once very grand. Most of the castle interior was destroyed by parliamentary forces during the English Civil War, following their policy of slighting potentially threatening fortifications. 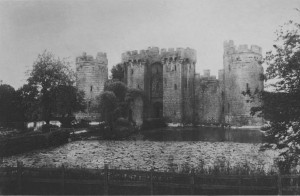 Bodiam is a magnificent castle of the fourteenth century, situated 41 miles from Robertsbridge, close to the river Rother, which forms there the boundary of this county with Kent ; the large moat, or rather lake, which defended it, is connected with the river. The trace of the structure is nearly a square, enclosing a large area, surrounded by a broad anti deep moat, and having a massive round tower at each angle of the walls. The gates were on the N. and S. fronts, and there was a square tower in the centre of the E. and W. sides. The grand entrance gatehouse, in the middle of the N. front, was approached by a raised causeway, defended by a small barbican, of which some remains exist; this entrance is exceedingly fine, being flanked by two grandly machicolated square towers. On the opposite S. face is a square tower, pierced by a postern giving on the moat : in all there are nine towers.

The lands in this part of Sussex became first the property of the Norman Count d’Eu, a kinsman of the Conqueror, whose family possessions in Normandy were at Eu, near the coast not far from Dieppe, where is now the magnificent Chateau d’Eu,- the well-known residence of King Louis Philippe, and where H.M. Queen Victoria and Prince Albert were entertained in 1846. In the reign of Henry II, these lands belonged to Roger de Bodeham, and afterwards to the family of Wardedieu, whose heiress, about the year 1377, married a gallant soldier, Sir Edward Dalyngrugge, of East Grinstead. This knight had served during the wars in France with the Black Prince, and, like many of the English knights, by the plunder of towns and castles, or by the ransom of prisoners, had amassed great wealth, which after his marriage he proceeded to expend on the construction of this beautiful castle. It was erected on a site chosen by him, at a short distance from the original abode of his predecessors, the Bodehams and Wardedieus, whose moated residence can still be traced on the N. side of the Bodiam ruin. The licence to crenellate is dated 9 Richard II. (1386) to “Edwardus Dalyngrigge, chivaler, mansum manerii, Bodyham, Sussex,” and the Patent Roll adds: “et Castrum inde in defensionem patria; adjacentis pro resistentia inimicorum nostrorum construere :” an unusual phrase, referring to the French. 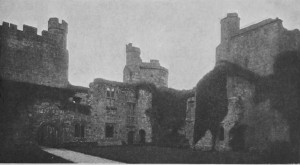 Sir Edward’s niece Philippa brought the castle and lands in marriage to Sir Thomas Lewkenor, whose descendant, opposing Richard III., was attainted, and the castle was besieged by the Earl of Surrey. Some earthworks in the field N. of the castle are perhaps due to this attack. Henry VII. reversed the attainder, but in 1585 the Lewkenors’ property went to the Earl of Thanet, and was purchased from this family by the Powels, who afterwards sold the castle to Sir Thomas Webster, of Battle Abbey.

In 1643 Bodiam was dismantled by Sir William Waller, who, after the siege of Arundel, despatched parties to destroy all the Royalist fortresses in Sussex, when the materials were sold, and nothing was left of this grand structure except the outer walls and towers.

It is but the shell of a fine early Perpendicular castle, the outer walls being perfect, though the interior is in ruins ; the walls, rising from splayed bases direct from the moat, are built of excellent masonry throughout, the whole being evidently of the same period. The great N. gatehouse was the principal tower, in front of which, on the causeway, stood the barbican, which is shown in Buck’s drawing ; the entrance, recessed between the two square flanking towers, had a vaulted passage, 30 feet long, pierced with fan tracery for offensive purposes, of which the old wooden gate and the lower portion of the old portcullis remain ; of these defences there were three in the passage. The lodgings and offices were built round the main walls, the southern side having its centre postern, with the great hall and the kitchens and buttery bn either side of this gate. The floors were mostly of wood, the kitchen being the whole height of the building of two storeys. The chapel on the S. had a window of three lights, and next to it were the dwellings of the lord and lady of the castle. The towers have chimneys and fireplaces remaining, but the floors have gone ; their interiors are hexagonal. The abutments of the bridges, both at the chief entrance and at the S. sallyport, may yet be seen. It is altogether more of a castle than a house ; it was habitable, but built chiefly for defence—in this respect the opposite of Hurstmonceux. Immediately over the entrance are three shields bearing the arms of Bodeham, Dalyngrugge, and Wardedieu, and above, the crest of the founder, a unicorn’s head. (Castles Of England, Sir James D. Mackenzie, 1896)